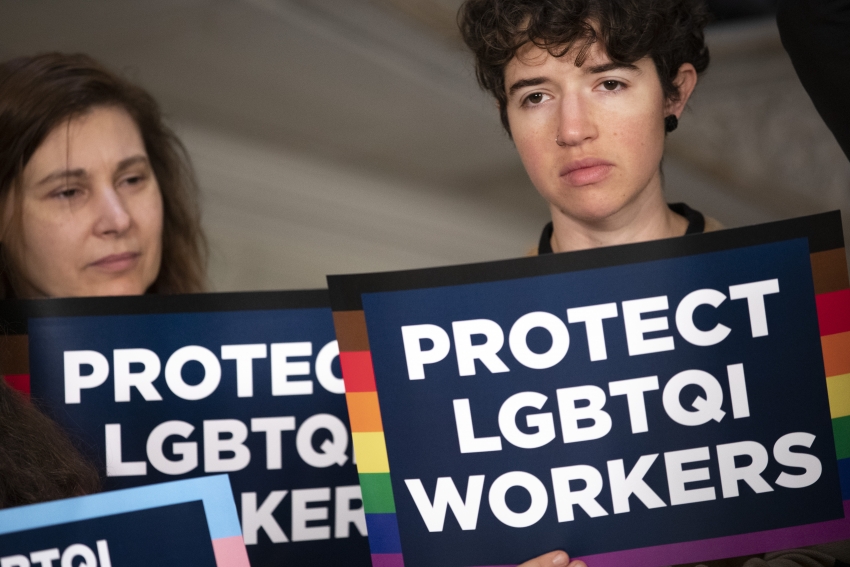 “Sex,” Katherine Franke, a law professor at Columbia University, told the New York Times, “is a confounding term in our culture, in our language and certainly in the law.” As the Supreme Court opens a new session, its justices are set to tackle the conundrum of defining “sex.” At issue is whether Title VII of the landmark Civil Rights Act of 1964, which bars employment discrimination “because of sex,” applies to gay, lesbian, and transgender employees.

There are many reasons why LGBTQ Americans deserve federal protection against employment and workplace discrimination. Simplest and most glaring: In a majority of states, it is perfectly legal for an employer to refuse to hire someone, or to fire them, simply because of their sexual orientation or gender identity. In its preview of Bostock v. Clayton County, Altitude Express Inc. v. Zarda, and Harris Funeral Homes v. EEOC, SCOTUSBlog described the trio of cases as “some of the biggest” of the Court’s forthcoming term. The Court’s decisions will be consequential for how secure all workers—whether straight or queer; transgender, cisgender, or nonbinary—are in their jobs, because the cases will also test a 30-year-old decision that established gender stereotyping as a form of sex discrimination.

It is distressing that corporate news media have not deemed employment protections for LGBTQ workers to be newsworthy until the Supreme Court decided to hear these cases, but it is no surprise to us. The inadequate news coverage fits a pattern we found in a study of several hundred news reports on LGBTQ issues published by four major newspapers between January 2016 and November 2018. The study, “Stonewalled: Establishment Media’s Silence on the Trump Administration’s Crusade against LGBTQ People,” appears in Censored 2020: Through the Looking Glass (Seven Stories Press, 2019).

Our study concluded that, during that period, corporate news media consistently muted, marginalized or ignored the steady rollback of LGTBQ protections and rights under the Trump administration. Another recent study, focused on television news coverage, reached similar conclusions: Since Trump became president, news coverage of LGBTQ issues has “all but disappeared.”

From the 2016 presidential campaign through the midterm elections of 2018, we found that corporate news coverage of LGBTQ issues focused on two main issues: the president’s proposal to ban transgender people from military service and so-called “bathroom bills.” Together these two topics accounted for more than forty percent of all LGBTQ-focused news articles in the New York Times, Washington Post, Los Angeles Times and Wall Street Journal. By contrast, during the same time period, the independent news outlets in our study covered a much wider range of issues facing LGBTQ Americans, devoting less than 10% of their coverage to the proposed transgender military ban and “bathroom bills.”

Based on the findings from our study, we forecast three trends in news coverage of the Supreme Court’s hearing of the Title VII anti-discrimination cases. The first pattern we expect to hold is a positive, encouraging one; the remainder are causes for concern.

LGBTQ people—including spokespersons for leading LGBTQ rights organizations, such as Human Rights Campaign, Lambda Legal and the National Center for Transgender Equality—will achieve what sociologist William Gamson calls “media standing.” Standing, in Gamson’s use of the term, goes beyond being covered or mentioned in the news; the figures that journalists quote directly are positioned as agents whose insights and actions matter.

In our study, we found that at least 7.5% of quoted sources identified as gay, lesbian, or bisexual. Although the actual numbers of LGBTQ people in the United States are difficult to determine, that figure is higher than recent estimates of the nation’s adult population indicate, suggesting that journalists are making good faith efforts to represent “the diversity of opinion and experience within the LGBTQ community,” as recommended by Sarah Kate Ellis in her introduction to the GLAAD Media Reference Guide.

This point about the inclusion of LGBTQ voices may seem obvious, even trivial, but a long history of systemic prejudice against LGBTQ people by the nation’s most prominent news outlets makes the achievement of media standing by LGBTQ people noteworthy. As recently as 1996, for example, Edward Alwood, author of Straight News, concluded that U.S. news media “rarely focus” on the leaders of gay and lesbian rights organizations.

As coverage of the LGBTQ cases argued before the Supreme Court will show, in 2019 news organizations have improved in this regard.

News stories are geared toward current events and journalists often fail to provide the long-term historical view necessary to fully understand those events.

In October 2018, for example, the Trump administration proposed to define gender as a biological fact, determined at birth. In our data, we found that spokespeople for civil liberties groups, such as the American Civil Liberties Union, articulated their opposition by linking protections of and inclusion for LGBTQ people to the history of the civil rights movement, including the racial integration of the military by President Truman in 1948, and the desegregation of schools, as mandated by Brown v. Board of Education in 1954.

Had the newspaper articles in our study not included the voices of civil liberties advocates, readers would have had no historical context with which to make sense of the Trump administration’s audacious proposal.

To what extent will news coverage of the Supreme Court cases on employment discrimination be enhanced by historical perspective? Our study suggests that the answer to this question depends on whether that coverage features the voices of civil liberties organizations.

In our study, establishment newspapers frequently quoted Tony Perkins, president of the Family Research Council, as a newsworthy opponent of state laws and ordinances that would prohibit LGBTQ discrimination.

Quotations published by the New York Times and Wall Street Journal, for example, portrayed Perkins as a fair partisan, engaged in legitimate debate, but failed to inform readers of Perkins’ more virulent anti-LGBTQ statements or that, in 2010, the Southern Poverty Law Center listed the Family Research Council as an anti-gay hate group.

Similarly, Media Matters has documented how establishment media outlets have highlighted Mike Pence’s civility with gay men in public and professional meetings while downplaying his long record of anti-LGBTQ positions, first in Congress, then as Governor of Indiana, and now as Vice President.

Numerous studies show that hate crimes against LGBTQ people—including violence that is often deadly—is on the rise, while acceptance of LGBTQ people in everyday situations is eroding. But corporate news coverage of the trio of Supreme Court cases is likely to downplay these realities, in part by depicting the opponents of employment protections for LGBTQ Americans as reasonable and principled figures—even when they have taken virulent homophobic or transphobic positions in the past. Call it the Tony Perkins Syndrome.

At its best, journalism provides insights into complex issues, puts news into context, and highlights abuses of authority. We would be happy for establishment news outlets to report on the Supreme Court’s LGBTQ cases in ways that prove our critical predictions wrong. But, based on our study of recent news coverage, we expect otherwise.

The Supreme Court is not likely to rule on the trio of LGBTQ employment cases until June 2020. We do not have to wait until then to judge the establishment media’s coverage of crucial LGBTQ issues, or to hold news organizations accountable when they fail to provide the kind of coverage we need to act as informed members of our communities.

Andy Lee Roth is associate director of Project Censored, a media watchdog organization established in 1976. His research, including the study described in this article, focuses on the power of news to shape public opinion. He is the coeditor of in Censored 2020: Through the Looking Glass (Seven Stories Press, 2019) and nine previous Censored yearbooks.

April Anderson is the lead author of “Stonewalled: Establishment Media’s Silence on the Trump Administration’s Crusade against LGBTQ People,” which appears in Censored 2020. A member and advocate of the LGBTQI+ community, they work as a Research and Instruction Librarian at Macalester College.