Chicago Teachers Didn’t Win Everything, But They’ve Transformed the City—And the Labor Movement 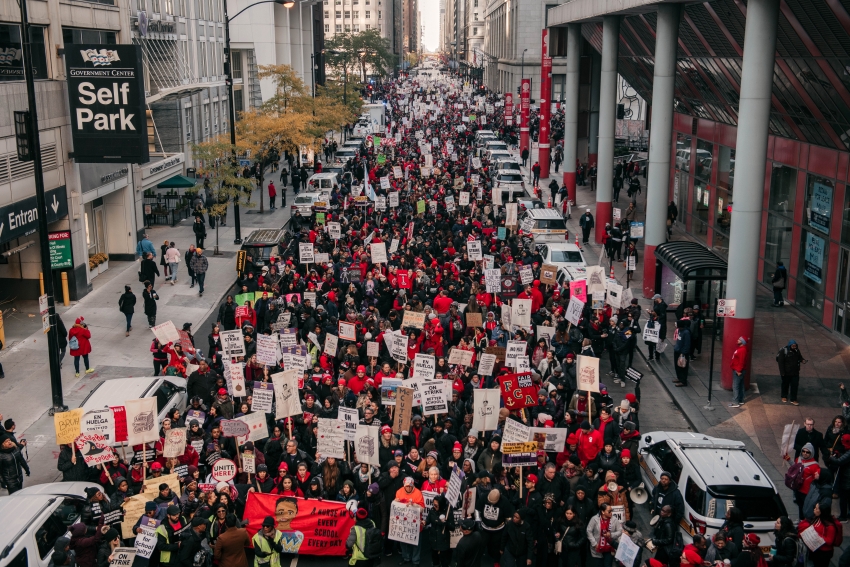 Chicago teachers made history through their strike. But their fight isn't over. (Photo by Scott Heins/Getty Images)

Chicago teachers and staff returned to the classrooms Friday after more than two weeks on strike. Their walkout lasted longer than the city’s landmark 2012 strike, as well as those in Los Angeles and Oakland earlier this year.

The Chicago Teachers Union (CTU) strike also lasted long enough for the season’s first snowstorm to blanket thousands of teachers and staff who surrounded City Hall Thursday morning to demand Mayor Lori Lightfoot agree to restore missed instructional days as a final condition of their returning to work. After a few hours, the union and the mayor arrived at a compromise of five make-up days—a move Lightfoot had resisted until the eleventh hour, despite the fact that it’s a standard conclusion to teacher strikes.

Over the course of an often-bitter battle, CTU and its sister union, SEIU 73, overcame a series of such ultimatums from the recently elected mayor. Before the strike, Lightfoot had refused to write issues such as staffing increases or class size caps into a contract at all. Following a budget address last week, Lightfoot vowed that there was no more money left for a “bailout” of the school district. But a tentative agreement approved by CTU delegates Wednesday night requires the school district to put a nurse and social worker in every school within five years and allocates $35 million more annually to reduce overcrowded classrooms. Both unions also won pay bumps for support staff who have made poverty wages.

Yet these substantial gains still fell short of what many members had hoped to achieve, given that they were fighting for basic investments already enjoyed by most suburban school districts—investments that Lightfoot herself had campaigned on this spring.

“It took our members 10 days to bring these promises home,” CTU Vice President Stacy Davis Gates told reporters after an agreement was reached over instructional days. “But I want to tell my members: They have changed Chicago.”

Members of SEIU 73 ratified their contract this week, and CTU members will now have 10 days to do so. But the impact of the two-week walkout is likely to extend far beyond the contracts themselves.

During daily rallies that drew tens of thousands of teachers, staff and supporters, the unions repeatedly made the argument that there was plenty of wealth in the city to invest in schools and public services—it was just concentrated in the wrong hands. They also touched on what’s often a third-rail for public-sector unions, criticizing the resources lavished on police at their expense. The strike’s momentum will carry over most immediately into a budget battle with Lightfoot, with the teachers’ union partnering with a larger coalition fighting to tax corporations and luxury real-estate at a higher rate in order to fund affordable housing, public mental health clinics and other services.

The teachers union also shone a light on an opaque financing tool known as Tax Increment Financing, or TIF, that’s intended to funnel additional property tax dollars to “blighted” areas, but that critics say is akin to a “corporate slush fund.” On Tuesday, nine CTU members were arrested at the headquarters of Sterling Bay to protest the city’s decision to award the Wall-Street backed developer more than $1 billion of TIF subsidies earlier this year.

“That day in and of itself was huge because we were able to call out the city’s hypocrisy,” says Roxana González, an 8th-grade teacher at Dr. Jorge Prieto Math and Science Academy who was among those arrested. “The fight to fund what our communities need is a much longer one than our contract fight, and teachers across the city are going to continue to be a part of it.”

The two-week walkout will also likely have reverberations for teachers and other union members outside of Chicago. The CTU’s 2012 strike helped inspire a national network called “Bargaining for the Common Good” that has brought together unions seeking to expand the scope of contract bargaining beyond pay and benefits.

“In many ways this was both the toughest and most visionary strike fought yet on the principals of Bargaining for the Common Good,” says Joseph McCartin, the director of the Kalmanovitz Initiative for Labor and the Working Poor at Georgetown University.

“The union engaged in some effective popular education about the structural issues of school underfunding that it can follow up on in the future. Although it was a difficult fight, the CTU has come away with gains that will make the schools better and encourage teachers elsewhere to fight for similar things.”

One of CTU’s boldest “common good” demands was for affordable housing—a move that captured national headlines and became a centerpiece of the mayor’s narrative that the union was stalling negotiations through an overly political agenda.

While the union didn’t win on housing assistance for new teachers or gain the school district’s support for rent control, one of CTU’s earliest and clearest victories was an agreement to hire staff specifically to support the more than 17,000 homeless students in Chicago Public Schools—an approach that could be a model for other school districts.

Other key wins on social justice issues include new guarantees for bilingual education, including more dedicated teachers for English language learners, and a declaration that Chicago schools are sanctuary spaces.

These are vital issues in a school district where nearly half of students are Latinx and nearly one-fifth are English language learners, says González, who also helped push for these changes as a member of the CTU’s Latinx caucus. She has previously faced a lack of resources and the potential for discipline when she tried to aid a former student who reached out to her for help with a pending deportation case. As part of the new agreement on sanctuary schools, the school district will create a training program for staff on how to respond to ICE presence in schools and assist immigrant students. It will also allocate up to $200,000 annually to help employees navigate immigration issues.

The victories are less clear-cut when it comes to the key issue of support staffing. The district will begin hiring more nurses and social workers in the highest-need schools this year, but it will take five years before they’re guaranteed for every school. And while the CTU has highlighted that nine out of 10 majority-black schools in Chicago do not have a librarian, the agreement creates a joint union-school district committee on “staffing equity” that will provide a path—but not a guarantee—for high-need schools to hire additional librarians, counselors or restorative justice coordinators.

Some teachers say they were prepared to continue striking until more progress was made on staffing, smaller caps on class sizes and regaining teacher prep time eliminated under previous Mayor Rahm Emanuel. But facing an intransigent mayor, worsening weather and a November 1 deadline for the suspension of their employer health insurance, CTU delegates ultimately voted on Wednesday night to approve the tentative agreement by a margin of 60%.

Class size remains a particular concern for instructors like Jeni Crone, an art teacher at Lindbloom Math and Science Academy. While CTU won for the first time an avenue to enforce hard caps on class sizes, the recommended limits themselves remain the same: Up to 31 in high school classes, depending on the subject, which can reach 38 students before an automatic remedy is triggered.

Crone previously taught at Kelvyn Park High School, but lost her job there in 2017 amidst a round of budget cuts that led to the loss of 11 positions at the school. She says she repeatedly saw high class-size caps used as justification to merge two smaller classes into one larger one. Before her position was cut, her three art classes were combined into two, with 34 and 35 students, respectively.

“It’s one of the easiest ways for CPS to save money,” she says. “But we should be normalizing smaller class sizes.”

Still, Crone says she is “cautiously optimistic” about the contract’s wins, and is determined above all to make sure that union members remain united with students and parents to continue demanding more.

“I am not totally content, but the way I see it, it’s OK for us not to be content,” Crone says. “That means I still want better for my students, and we should always want better for them.”