On Super Tuesday, the LA Teachers’ Strike Paid Off Again 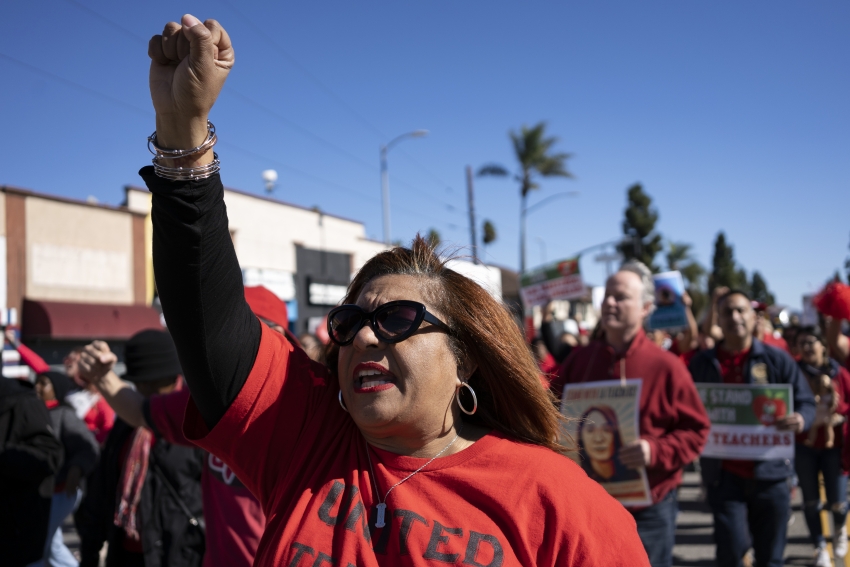 The legacy of the LA teachers' strike is now fueling electoral victories. (Photo by Ronen Tivony/NurPhoto via Getty Images)

Last January’s Los Angeles teachers’ strike saw some 30,000 educators walk out of the classroom in the nation’s second-largest school district and return six days later with a new contract. The teachers fought not only for wage increases but broadened their demands to include schooling conditions for the district’s more than 500,000 students. They called for caps on class sizes and extra support staff, including a full-time nurse in every school and a librarian for all middle and high schools. They pushed for greater oversight of charter schools and against their further expansion. The community overwhelmingly supported the teachers, and, by and large, the teachers won.

Now, the strike’s legacy is helping fuel electoral victories, which will determine school funding decisions and the district’s approach to charters. “One contract doesn’t solve all the decades of disinvestment in our schools,” says Cecily Myart-Cruz, president of the United Teachers Los Angeles (UTLA). “When you have privatizers knocking at the door—no, they ain’t knocking. They’re bulldozing our doors in.”

The issues at stake in the strike were on the ballot on Super Tuesday in Los Angeles. School board elections in the district typically pit the union against charter school advocates. The UTLA backed candidates in all four of the seats up for grabs. One, George McKenna, ran unopposed. Another, local progressive luminary Jackie Goldberg, won an outright majority of her district’s votes. Scott Schmerelson, an incumbent in the west San Fernando Valley, failed to reach a majority and will go to a runoff election in November. The same goes for Patricia Castellanos, running to replace the term-limited Richard Vladovic, who was seen as the swing vote on the board. In an indication of the attention paid to the school district, Democratic presidential candidate Bernie Sanders, whom the union endorsed, himself endorsed Castellanos. Both she and Schmerelson, after finishing atop their primaries, will face candidates backed by charter advocates this fall.

In recent years, the spending on Los Angeles Unified School District (LAUSD) races has grown dramatically. This year, outside expenditures topped $6.2 million during just the primaries, making them the most expensive U.S. school board primaries ever. And charter school advocates outspent the UTLA 3 to 1. The record they surpassed? The 2017 LAUSD elections, in which charter school lobbyists spent $9.7 million to secure a 4-3 majority on the board, as UTLA shelled out $5.2 million. That majority evaporated when one of the charter-friendly candidates, Ref Rodriguez, pled guilty to campaign-finance violations and resigned from the board. Goldberg, who served on the board in the 1980s before moving on to the L.A. City Council and the State Assembly, won a special election last May to finish out his term.

“Jackie Goldberg knows more than anyone,” says John Rogers, professor of education at UCLA. Having helped steer the district through its last major teachers’ strike in 1989, Goldberg is now back in the aftermath of another. Rogers notes that where the 1989 strike focused mostly on bread-and-butter economic issues, the focus of the recent walkout was on conditions of teaching and learning: smaller classes, more support staff, and barring random searches of students, “which was very much a racial justice issue for young people in Los Angeles”—a district where nearly 9 in 10 students are students of color. Rogers calls this approach “social-justice teacher unionism: emphasizing that schools are nested in a broader set of social conditions that need to be addressed in order for the full development of young people and their communities to be possible.”

School funding in California has been troubled ever since voters passed Proposition 13 in 1978, limiting the local property tax revenue available to fund public schools. This means that California spends around $1,500 per pupil less than the national average, despite its robust economy. The situation worsened after the financial crisis of 2008, says Rogers: “After the Great Recession, you saw a dramatic reduction in budget and growth of charter schools in a very unregulated laissez-faire kind of way.” Charters are unionized at much lower rates than non-charter public schools. As such, the expansion of charters represented a de facto undercutting of unionized teachers, and therefore a potential method of reducing costs.

In 2018, the school board brought in Austin Beutner as district superintendent. With a background in investment banking and no experience in education, Beutner was supposed to get the districts’ financial ducks in a row, but has since become something of a boogeyman for the UTLA. “He came in with a business model,” says Myart-Cruz. “We know that our kids, our babies are not widgets. Our members are not robots, they’re not automatons. You can walk into any school, and all of the staff have more experience than our superintendent. How the hell does that happen?” Beutner serves at the pleasure of the board, so his future with the district may depend on the outcomes of the runoff elections in November.

Tuesday didn’t all go to plan for the UTLA, however. An opportunity for financial relief was voted down—another (unrelated) Proposition 13, in which the state would have sold $15 billion of bonds to fund infrastructure improvements to K-12 and higher education facilities, prioritizing health- and safety-related projects and making funds more readily available to poorer districts. True to form, the Howard Jarvis Taxpayers Association—an anti-tax lobbying group named for the man who led the push for the infamous earlier Proposition 13—opposed this newer proposition as well.

The UTLA had supported Proposition 13 as part of its campaign against austerity and for more robust school funding. The fight is multifaceted: the actions of last year’s strike flow into the union’s electoral efforts, something more union members are now coming to grips with, says Myart-Cruz. “At the end of the day, teaching and working with children is a political and revolutionary act. So a lot of folks will just say, ‘I want to teach, I just want to work with my students, and I don’t want to do all that political stuff.’ But politics can get us what we want. Politics can get us the needed resources that we deserve.

Sammy Feldblum studies geography at UCLA and covers politics, culture, and the environment across the southern half of the United States.