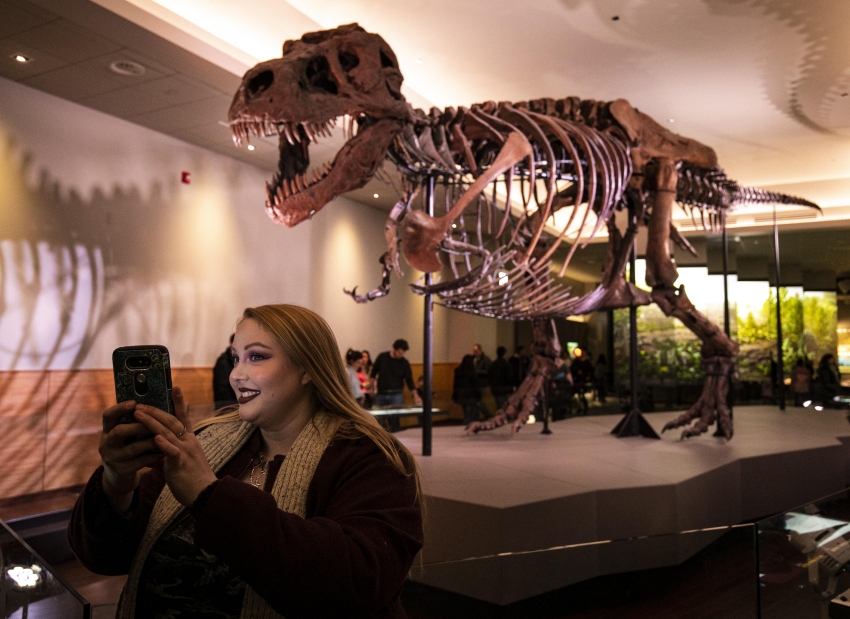 “We fear these cuts will disproportionately impact staff of color and those already paid the least,” Field Museum workers explain in a petition that has now garnered over 1,700 signatures. “We are proud to call the Field home, and are prepared to make sacrifices to preserve it for generations to come. We are asking leadership to do the same.”

Best known for being the home of SUE, the most intact T. rex skeleton in the world, the Field is the nation’s third largest natural history museum after the Smithsonian and New York’s American Museum of Natural History. As of 2019, the museum had an endowment of approximately $440 million, up from $299 million in 2012.

The museum has been shuttered since mid-March due to the pandemic, and it remains unclear when it will be able to reopen to the public. Though the Field secured a loan from the federal Paycheck Protection Program and 70% of its revenue comes from sources other than ticket sales, at a May 19 virtual town hall with employees, CEO Richard Lariviere announced an impending 10% pay cut as well as an unspecified number of layoffs.

“At the town hall, we had a lot of staff proposing alternatives and various cost-cutting ideas like rotating furloughs, graduated pay reductions, and reducing hours, and asking if those had been explored,” says Anna Villanyi, an educator who has worked at the museum for two years. “But those ideas were dismissed without transparency about to what degree leadership had already explored them.”

Lariviere’s total compensation in 2018—the most recent year with available data—was $796,000. While the presidents of the Boston Museum of Science and American Museum of Natural History have respectively taken a 50% and 25% pay cut in light of the crisis, Lariviere reportedly dismissed the idea of reducing his own compensation as “a meaningless gesture.”

“A lot of museums are experiencing hardship due to this time, and we can see the different ways that is being addressed,” Villanyi tells In These Times. “We have such a large and seemingly financially stable institution that’s choosing not to make equitable moves like graduated pay cuts that other museums are doing.”

The Field Museum’s nearly 400 employees include scientists, collection managers, educators, technicians, guest services workers, maintenance workers and security guards. Many, like Villanyi, have been working from home during the pandemic, but others, like those who manage the upkeep of the museum’s exhibits, are not able to work from home.

Staff who can work remotely have been donating their vacation hours to their coworkers who don’t have the option of working from home, ensuring they continue receiving income. “It has been a really helpful act of sacrifice,” Villanyi says. “I believe it’s been over $200,000 worth of vacation hours that have been donated into that pool.”

In addition to aiding one another through the crisis, Field Museum employees have also been helping the public by sewing face masks and repurposing 3-D printers to make face shields for frontline workers.

The museum workers are specifically calling for a moratorium on pay cuts and layoffs until they can have a greater voice in cost-cutting measures, particularly by having a staff representative present at all future budget meetings.

“I’m hopeful that the increased awareness through our petition puts pressure on accountability for those things to happen,” Villanyi says.

Their organizing effort is being assisted by the Emergency Workplace Organizing Committee (EWOC), a joint project of the United Electrical, Radio and Machine Workers of America (UE) and the Democratic Socialists of America (DSA).

EWOC was launched shortly after the pandemic hit the United States to give non-union workers the resources needed to organize their own workplaces around coronavirus-related demands like hazard pay, sick leave and provision of personal protective equipment.

UE International Representative Mark Meinster says that over 1,000 workers from a range of industries including fast food, manufacturing, meatpacking, retail and higher education have received advice and assistance through EWOC on how to take workplace action around Covid-19 related issues.

With help from EWOC, workers around the country have already won several victories, including improved health and safety measures for grocery workers in Texas and Pennsylvania, and hazard pay for 250 Taco Bell workers in Michigan.

Meinster says that most of the work of EWOC is done through volunteers including DSA members, former Bernie Sanders campaign staff and UE activists.

“We’re building on models developed around the Bernie Sanders campaign of doing distributed organizing—where you’ve got a large group of motivated volunteers—and apply that model to workplace organizing,” Meinster explains. “That’s one of the keys to revitalizing a fighting labor movement. We’ve got to figure out how to go beyond mere staff resources and engage lots of motivated people out there.”

Meinster says the Field Museum organizing is a perfect example of workers organically coming together and reaching out to EWOC for assistance. “Like all museum workers, they’re facing some real difficult fights,” he says. “But here we’re seeing workers start to stand up and do something about it.”