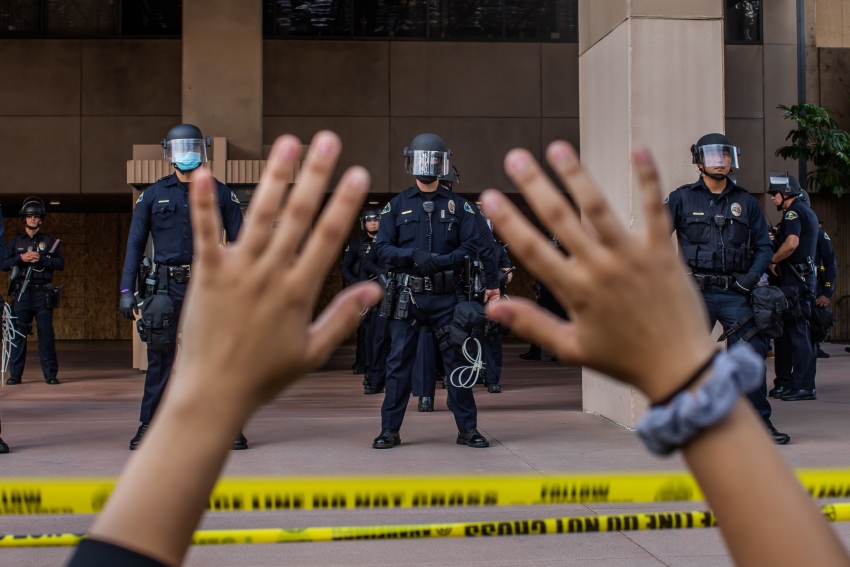 A demonstrator holds her hands up while she kneels in front of the Police at the Anaheim City Hall on June 1, 2020 in Anaheim, California, during a protest over the police killing of George Floyd. (Photo by APU GOMES/AFP via Getty Images)

The entire bargaining unit of the In These Times union is calling on the Washington-Baltimore News Guild to urge the News Guild, as well as the CWA, to pass a resolution calling on the AFL-CIO to disaffiliate from the International Union of Police Associations and other police unions. We believe that the mission of the AFL-CIO is to build a strong labor movement that fights for justice and equality for all working people. It is not possible to carry out that mission while also representing the interests of police, who oppress, beat, and imprison working people, particularly Black people. It is time for the AFL-CIO to recognize that it cannot fight for both sides in America's battle for justice.

Over the past few weeks, journalists have been systematically targeted by police while covering protests. Journalists have been attacked with tear gas, pepper spray and “less lethal” ammunition. One photojournalist was blinded in her left eye after being shot by police with a rubber bullet. The Freedom of the Press Foundation and the Committee to Protect Journalists are currently investigating over 380 press freedom violations cataloged since May 26, including more than 56 arrests and 50 physical attacks by police.

As an organic upswell of people exercise their First Amendment right to hold officers who use unjustified lethal force against civilians accountable, the police union has routinely come out to support officers who face even minimal consequences for their actions. To continue our affiliation with the IUPA would go directly against the AFL-CIO’s stated goal of achieving a “better life for working people” by protecting one of the greatest threats to Black workers in this country. Additionally, it would undermine our best interests as media workers who are at the forefront of defending free speech.

We want to ensure our union is on the right side of history. Please consider this our endorsement of a formal statement asking our labor coalition to separate itself from police unions.

The In These Times Union

In These Times Union

The In These Times Union is part of the Washington-Baltimore News Guild Local 32035.

More by In These Times Union