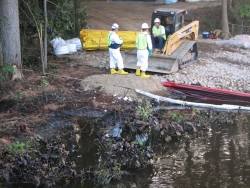 Workers clean up oil near the site of a million-gallon pipeline leak in Marshall, Mich.   (Photo by Kari Lydersen)

MARSHALL, MICH.—There are lots of losers in the wake of the Michigan oil spill that is being called the Midwest’s worst ever – up to a million gallons of heavy crude dumped into the Kalamazoo River.

The turtles, muskrats and birds trying in vain to clean themselves. The small-mouth bass that had made this a prime angling spot. Local residents, including 61 families ordered evacuated, who have weathered a suffocating smell of petroleum and fears about well safety. And the pipeline company Enbridge itself, which will pay millions in long-term cleanup costs.

But some are seeing a silver lining to the environmental disaster, at least in the short term. That would be local merchants and contracting companies in the area of Marshall and Battle Creek, Michigan…and the 700-plus contractors who have been hired for cleanup efforts, staying in local hotels and working 12-hour shifts laying boom in the river, sucking up oil with vacuum trucks and conducting air and water monitoring.

The intensive cleanup to get oil out of the water is expected to take several weeks, and it may take months to remove oil-soaked vegetation and soil from banks and river bottom, according to Enbridge and EPA officials.

It is unclear where the workers come from, though most appear to be from out-of-town contracting firms hired by both the EPA and Enbridge. Enbridge will ultimately pay all the costs associated with the cleanup. The contractors are working 12-hour day and night shifts that are the norm in the industry, wearing white fire-retardant suits, using flood lights at night.

The 12-hour shifts of workers at Enbridge’s Calgary command center attracted the attention of the public and the National Surface Transportation Board, with questions of whether overtime or long hours could have contributed to negligence monitoring the pipeline.

Patrick Daniel, CEO of the Houston-based Enbridge subsidiary responsible for the pipeline, said control room workers were not putting in longer hours than normal.

Meanwhile the economic infusion from cleanup workers, government investigators, journalists and others related to the spill is badly needed in the area, though any positive economic effects will likely be offset by the loss of visiting fishermen and impacts on property values in the future.

Battle Creek, a town of 54,000 best known for the Kellogg cereal company world headquarters, has 11.5 percent unemployment (as of June) and streets dotted with vacant homes. For the past decade the town has periodically reeled from layoffs and cutbacks at the Kellogg plant, including 300-plus workers laid off in late 1998.

Marshall native Ted Russell, an auto technician, noted that the infusion of workers has been good for the local economy, though it’s not a situation locals would have chosen. He guesses maintenance on tanker and vacuum trucks might result in increased business for him and his co-workers. He noted that a local gravel company was hired to build a road to the spill site.

“You see them everywhere, in the hotels and restaurants, K-Mart,” he said of the workers. “It’s really restarted things here, though not for the reason we would have wanted.”

He also observed that though residents have been advised to stay away from the river and any area with a notable oil smell because of potentially dangerous levels of benzene and other pollutants in the air, most cleanup workers are not wearing respirators or masks. There have been no public complaints about worker health issues in Michigan, though that has been a significant issue with the BP oil spill in the Gulf of Mexico.

At a popular karaoke bar close to the spill site Sunday night, several workers and investigators said they were not allowed to speak to media. They did sing a few numbers…crooning the Eagles’  “You can’t hide your lying eyes” and Charlie Rich’s “Behind Closed Doors.”