How to Restore the Power of Unions? 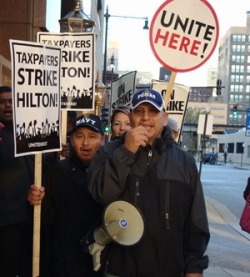 On Oct. 16, hotel workers at the Chicago Hilton protested the chain's efforts to lock workers into the recession. They followed the examples of the world’s largest Hiltons in Honolulu and San Francisco, where workers led strikes earlier that week.   (Photo from UniteHere.org)

In the early 1990s, trade unionists in the United States abandoned the strike as a central component of trade union strategy. In its place, unionists and academic supporters focused on organizing the unorganized, one-day strikes and community campaigns. Yet on the main concern of the traditional labor movement—how to extract concessions from employers through collective bargaining—there has been virtual silence.

University of Texas Law Professor Julius Getman stands out as a rare exception to this trend. For several decades, Getman has urged the labor movement to focus on the fundamentals of trade union power.  Getman’s 1998 book, The Betrayal of Local 14, chronicled the heartbreaking International Paper strike of the early 1990s, making a strong plea for banning the permanent replacement of striking workers.

Fortunately for labor activists, Getman has written another about book about labor: Restoring the Power of Unions: It Takes a Movement (Yale University Press). The first half of Restoring the Power of Unions focuses on the Hotel Employees and Restaurant Employees International Union (HERE). Getman believes HERE’s member-centered unionism can serve as an example for the entire labor movement. The second half of the book provides insightful analysis on all-too-often ignored topics of trade union strategy, the shortfalls of the organizing approach and the need for labor law reform.

But throughout the book, Getman constantly directs the labor movement back to its true source of power: a mobilized rank and file.

Getman chose to focus on HERE because he believes that this union, “more than any other union, has focused not only on organizing and bargaining but also on creating a spirit of movement.” With hotel workers currently engaged in a high-profile, strategic battle against national hotel chains, Getman’s analysis is certainly timely.

Getman traces HERE’s transformation from a mobbed-up union into one of today’s more dynamic international unions. Along the way, he provides valuable analysis and history of HERE’s strikes at Yale University and the transformation of local unions in San Francisco and Las Vegas. To Getman, key to HERE’s transformation was the rise of a grouping of leaders who firmly believed the power of the union comes from movement building— thus the title of the book.

Restoring the Power of Unions makes another valuable contribution by analyzing the conflicted 2004 merger of HERE and UNITE, the garment workers union, into UNITE-HERE. Drawing on his decades of relationships with UNITE-HERE leaders, Getman provides a detailed account of the battle between former HERE leader John Wilhelm and former UNITE leader Bruce Raynor. To many media observers, this was merely a personality dispute—a fight over who got the corner office. To Getman, however, the dispute was over fundamental differences in union philosophy: between the top down philosophy held by Raynor and his allies in SEIU, and the member-centered unionism of Wilhelm and the core HERE leadership.

With the labor movement wracked by internal conflict in recent years (the split of Change to Win, the UNITE-HERE conflict, the civil wars in SEIU), figuring out the underlying politics can be mystifying. Restoring the Power of Unions helps explain part of the puzzle. (Luckily, another piece will soon be filled in by Steve Early’s highly anticipated book The Civil Wars in Labor, which will dissect the politics and practice of Raynor’s ally, the Service Employees International Union (SEIU), and is due out next year.)

Halfway through the book, Getman switches to trade union policy. Getman covers topics such as details on how labor law is stacked against workers, the restrictions on the right to strike and a critical analysis of the Employee Free Choice Act. Getman disagrees with many other labor scholars that simply amending labor law to include card check will resolve labor’s crisis.

Drawing on decades of research, Getman argues that issues of access to employees and underlying union strength are more important to union growth. To Getman, such problems can be only be resolved through pressure tactics such as comprehensive campaigns. The comprehensive or “corporate” campaign is the strategy of strategic mobilization and pressure on employers used by some unions, including UNITE-HERE.

At some points, Getman overemphasizes the power of the comprehensive campaign. When properly utilized, the strategy has proven able to beat back some of the worst concessions. For example, earlier this year mineworkers at Rio Tinto utilized member mobilization and international pressure to force an end to a lockout and reach a contract settlement. Represented by the ILWU, the members beat back some, but not all, of management's concessions.

Most labor commentators ignore the system of labor control’s restrictions on the right to strike. They focus on organizing or social unionism, ignoring the fundamental questions of union economics. Not Getman. He argues the restrictions on the right to strike are critical, particularly changing the rule allowing permanent replacement of striking workers. Unlike many commentators, Getman also discusses the importance of labor’s long-lost tactics of solidarity, the powerful secondary strikes outlawed by the Taft Hartley Act of 1947. To Getman, union power comes from solidarity—from workers acting together.

The main problem facing the labor movement is not employers, politicians or labor law. It is our way of thinking—a problem of incorrect strategy. It is time for trade unionists and all involved in the broader worker’s movement to debate the critical question of how to “restore the power of unions.” With Restoring the Power of Unions, Getman provides an invaluable contribution for those in the labor movement looking for answers.