When Workers Fought Back: The 1970s’ ‘Rebel Rank and File’ 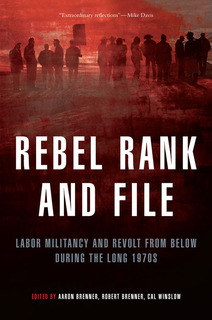 Rebel Rank and File: Labor Militancy and Revolt From Below During the Long 1970s collects articles chronicling the rebellious worker's movement of the late 1960s and 1970s, bringing to life this fascinating period in labor history. Kicking the book off, Cal Winslow provides an excellent overview of what he calls the “rebellion from below,” the largely rank-and-file driven opposition to what we can now see was just the beginning of the modern anti-union offensive.

A variety of labor scholars then explain the economics of the employer attack. While at times dense, these chapters provide necessary background for unionists trying to understand labor’s current predicament. In short: Facing declining profits and rising international competition, employers during the 1970s sought to erode hard-won work rules and force workers to work harder.  Employers called this increasing productivity, but workers called it deteriorating working conditions.

In industry after industry, this employer drive to squeeze employees collided with a workers’ movement infected with the period's anti-establishment mood. The second half of Rebel Rank and File truly shines, covering intense battles in industries as diverse as agriculture, telecommunications, teaching and trucking. Some common themes emerge: rank and file workers acting independent of the labor bureaucracy; the strong influence of radicals in promoting struggle; and workers' understanding that they must fight back.

A common theme throughout Rebel Rank and File is the key role of radicals in organizing the 1970s labor struggles.  One chapter describes an influx of young workers radicalized by the Vietnam War fighting AT&T’s drive to speed up work.  Another tells of the League of Revolutionary Black Workers, formed by radical activists in Detroit who linked up with factory workers to fight racism on job through wildcat strikes.  Dan La Botz describes the history of Teamsters for a Democratic Union, with a special emphasis on the role of radical student activists turned workers in helping create the organization.

Today, much of the remnants of labor’s left wing are drawn into union organizing or staff-driven campaigns. But back in the 1970s, trade union leftists charted their own course, helping give form to the militancy of the period. Arguably, the lack of an independent left wing in today’s labor movement is one of its greatest weaknesses.

One particularly interesting article, by ex-farm worker steward Frank Bardacke, reinterprets the history of the United Farm Workers of America (UFW). While most histories focus on the great boycott strategy of Cesar Chavez, Bardacke focuses on the strike-based strategies employed by farm workers, traditions long predating the UFW.  He argues this worker-centered strike strategy came into conflict with the boycott strategy, with its reliance on staff and volunteers in other cities far removed from the fields of California.  Given that today’s labor movement has similarly abandoned the traditional strike for staff-driven corporate campaigns and community coalitions, Bardacke’s article is particularly relevant and important.

During the 1980s, this rebel rank-and-file movement was largely, but not completely, silenced. In the final chapter, Steve Early, author of the forthcoming book Labor's Civil War, looks at the legacy of the turbulent 1970s. Early finds continuity in the present day struggles of rank and file teachers, longshore workers and truckers to reform their unions. He notes that some trade unionists see labor’s future in top-down, staff-driven unionism.

To Early, however, the lessons of labor history, including the 1970s, are that  “real union power can only be created through democratic worker organization, membership mobilization, strike activity, cross-border solidarity, and strong links between labor and other social movements.”

Organized labor’s current strategies are not working. By uncovering the hidden history of the 1970s, Rebel Rank and File reminds us that there is another path to union renewal—a path firmly rooted in the workplace and motivated by visions of transforming society.   Both veterans of the '70s and a newer generation of unionists will be well-served to learn the lessons from this critical period.