‘We’re Not Going to Take It’: Thousands Protest Anti-Labor Plan in Madison, Wis. 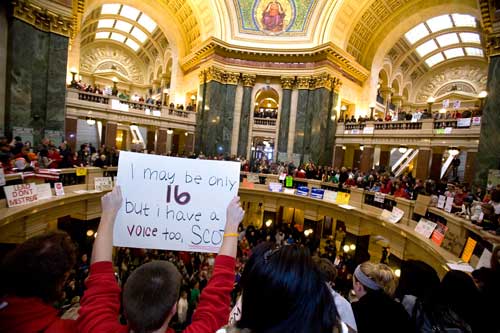 MADISON, WIS.—As I moved along with the tight-packed crowd late in the afternoon Wednesday, coming out of the demonstrator-filled Wisconsin capitol building and passing the statue of Hans Christian Weg (Union Army officer) toward the street, I touched the engraved lettering: “Fell at Chickagmauga.” It occurred to me that my great-great-grandfather, farmer-abolitionist Ezra Fuller, did NOT fall at Chickamauga, and that makes me a lucky survivor of another civil war—the one now raging in Wisconsin.

The scene has changed quickly during these last few days: 20,000 on Wednesday afternoon (there were 10,000 the previous day), 25,000 on Thursday. Many with union insignia, including no few giant Teamsters and the more middle-class (and more white), small town and suburban folks, middle-aged teachers and their families, with plenty of kids in tow. Not that there is a competition to be noted.

Actually, a little competition did occur earlier: on Tuesday, high schoolers from the tough East High had marched over together; Wednesday, it was West High, including the children of professors. More of them wearing the signature U-W red outfits. Like students of practically all levels and locations, they carried “We Love Our Teachers” signs worded one way or another. It was enough to choke up any old teacher, like this writer. Today (Friday), union men and women from out of state are expected to hear AFL-CIO President Richard Trumka speak on the square.

This, of course, about the hated Gov. Scott Walker, poised and with the votes to push through a union-busting bit of legislation, but also referencing the University of Wisconsin sports teams, never far out of the public eye. Next favorite might be those hundreds of high-school students shouting “UNION POWER” over and over again. And also to be noted: "THIS IS WHAT DEMOCRACY LOOKS LIKE."

Among the support statements causing the loudest cheers:

Packers’ Superbowl champion players, themselves proud unionists (nothing from coach or management, their conservative views presumably in line with the late Vince Lombardi)

The support statement from the archibishop of Milwaukee, trumping the local Bishop Robert Morlino, an Opus Dei devotee and political thug.

Among the best (home made) signs:

"I WENT TO IRAQ AND CAME HOME TO EGYPT"

And one wrapped around the back of a pet dog:

“We’re Not Going to Take It,” Twisted Sister

Not all was sweetness and light, of course. Now and then a corporate suit would step out of the door of one of the banks around the Square. They had done much to bring Scott Walker into office and badly wanted to see Walker’s plan go through. On a lighter note, and during a lull, I dropped by my insurance agent on the Square to check on a few details and he affably reminded me that he was practically the only non-Republican that he had ever met among his industry colleagues.

There were further disappointments and shortcomings, of course. Not much was heard from the small towns where the Republican vote had been heaviest (and Russ Feingold signs rare). UW-Madison President Biddy Martin, in an ongoing love fest with Walker, meanwhile urged university officials not to oppose her plan to divide this campus from the less-prestigious state system, so as to insulate it from budget losses and to advance the program of privatization begun under previous president Donna Shalala (herself best remembered for bringing into her administration former strikebreakers from Madison’s famed newspaper strike of the late1970s).

On another down note, Obama’s lukewarm message mirrored the disappointment in his presidency that has permeated Wisconsin since his 2008 victory here.

But all in all, good spirit remains, heartened by a Democratic walkout that left the state senate without cloture, state senators walking out into the crowd wearing orange t-shirts they had assumed in the morning, bearing the slogan, “Fighting For Working Families” and...disappearing from the governor and police alike (they promise to stay missing until he agrees to negotiate….have they crossed the border to a foreign land, such as Minnesota? Actually, Ilinois, from which so many thousands escape to Wisconsin each summer).

Finally, Democrats showed some backbone and perhaps offered an example at large.

Even the visible socialists (International Socialist Organization, known unkindly in their earlier, smaller membership years as “the invisibles”) seemed increasingly to Get With the Program, although stuck with selling a pretty clunky issue of the Socialist Worker and, at least at first, leading chants from labor’s yesteryears rather than the funnier ones from the crowd and fellow students. Then they looked, listened and got better.