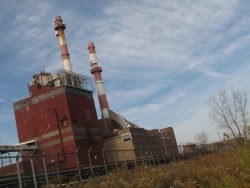 The State Line power plant in northwest Indiana is closing rather than being renovated to meet new pollution control requirements.   (Photo by Kari Lydersen)

I recently blogged about the Blue Green Alliance’s report showing how increased regulation of toxic chemicals, under the Toxic Substances Control Act, could create rather than kill jobs.

With the focus on “green jobs” and the growing awareness of the impacts of climate change and other environmental issues, it seems labor leaders and regular workers are increasingly refusing to buy industry scare tactics about government regulation killing jobs.

But this week, the International Brotherhood of Electrical Workers union indicated that scare tactics still work, as union leaders acknowledged they have joined with one of the nation's largest coal-fired power companies to lobby against proposed rules that would force coal plants to control emissions of toxic compounds including mercury, dioxins and lead.

On May 16 the Obama administration withdrew the rules, another major concession to the power industry announced several days after the president spoke in favor of increased oil and natural gas exploration.

The union argued the rules would decimate up to 50,000 union jobs in the power, railroad, utility and mining industries. The union joined the American Electric Power Co. in lobbying Congress for an extra five or six years to install pollution control equipment or shut down archaic coal-fired power plants; and union leaders helped draft a bill that would delay the start date for pollution control technology that otherwise would have to be installed within three to four years.

The Institute of Clean Air Companies, a trade group representing makers of pollution control equipment, in a letter to Congress said jobs were actually created by the Clean Air Interstate Rule of 2005 and the limits on sulfur dioxide emissions that went into effect in 1998, despite industry outcry that these limits would kill jobs. The institute said that just phase one of the 2005 clean air rule has already created 20,000 jobs.

A study by the Political Economy Research Institute and the group Ceres concluded the now-scuttled power plant rules along with two other air quality rules expected to take effect this year could create 1.5 million jobs over five years.

The end product will be an upgraded, cleaner American industry, along with good paying jobs and better health for the nation’s most vulnerable citizens.

The findings were, according to the foreword by Ceres president Mindy Lubber:

Especially good news for the many states, such as Ohio, Michigan, Pennsylvania, Virginia and Missouri, that are most dependent on traditional fossil fuel energy and most worried about traditional industrial jobs losses.

On its website the American Electric Power Co. touts its commitment to the Clean Air Act and pollution reduction, but says it needs more time to comply with requirements. Critics say the power industry has known for years that stricter rules were in the pipeline, and that the industry has proven time and time again that it will only take action to reduce emissions when forced to with strict deadlines.

On a local level, IBEW members similarly railed against environmental regulations that would protect public health in Chicago last month, as members were bussed into a city council hearing on whether the city’s two archaic coal-burning power plants should slash emissions that contribute to climate change and harm public health. The workers, employed by Midwest Generation, booed and applauded on cue even though few of them actually worked at the Chicago plants in question or lived in the city.

Environmental and clean energy groups have long argued that there are more jobs to be created in renewable energy like wind and solar or in modern so-called “clean coal” plants than to be retained through older coal-burning power plants, which employ relatively few people for maintenance and daily operation.

It seems fairly obvious that more jobs would be created by research and development into clean energy, construction of new wind farms and solar panel installations, and the opening of factories that make their components; not to mention the fabrication and installation of new pollution control equipment on aging coal plants.

Unions representing coal miners are understandably loathe to see any decrease in the demand for coal, but the reality is modern mining employs relatively few miners compared to past days, and most new mines are non-union.

In her foreword to the Ceres/ PERI report, Lubber wrote:

America’s status as one of history’s great economic powerhouses has long depended on our willingness and ability to reinvest and innovate when changing times tell us it’s time to retool. We’ve seen throughout our history that clean technology investments – whether to clean our rivers, improve our air quality or compete in the emerging low-carbon global economy – have long-term benefits that far outweigh the upfront costs.