Reviving the Strike: Lessons from the Pittston Struggle 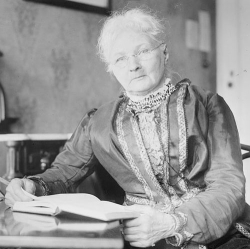 Daughters of Mother Jones, a woman's support group named after the famous labor activist pictured above, were instrumental in the success of the Pittston Strike.   (Photo via U.S. Library of Congress)

During the 1950s, American workers went on strike an average of 350 times each year. In the past decade, the average number of strikes each year fell to 20. In his new book Reviving the Strike: How Working People Can Regain Power and Transform America, veteran union negotiator and Working In These Times Contributor Joe Burns argues that grinding industries to a halt is the last, best hope for workers and their unions. Visit this site each Monday in June for exclusive excerpts from the book. Previous excerpts are here and here. —Working In These Times Editor Jeremy Gantz

For the labor movement to have any chance at reigniting the spark that was present back in the first part of the twentieth century, it must again develop into a fighting, grassroots force, capable of confronting corporate power. While many contemporary trade unionists continue to be stuck in a mindset that favors compromise and compliance over resistance and militancy, several labor conflicts of the last twenty-five years stand out for the tenacity of the union members involved, the level of rank-and-file activism, and the willingness to confront the system of labor control.

In four cases in particular—mineworkers at Pittston Coal, the “Charleston Five” long shore workers, factory workers at A.E. Staley and meatpackers at Hormel—employees faced an aggressive management determined to gut labor contracts and break the union. Unlike most trade unionists over the last three decades, however, these workers chose to take a stand, pushing the boundaries of labor law in the realization that simply playing by the rules of the game established under the system of labor control was a losing proposition.

More recently, in 2008, workers at Republic Windows in Chicago inspired the nation when they responded to the closing of their plant with a bold tactic rarely used since the 1930s, a plant occupation. Trade unionists attempting to revive the strike must learn from these struggles if the labor movement is to have a future in this country as a force for worker rights.

If there was one labor/management conflict over the past quarter century that was infused with the spirit and militancy of the traditional labor movement, it was the battle the United Mineworkers of America waged in 1989 against Pittston Coal, based in southern Virginia. The stakes of this battle were high for the UMWA. In industry after industry, aggressive corporations had demolished pattern agreements during the 1980s, and Pittston appeared determined to do the same thing in the mining industry, refusing to sign on to the standard contract covering mine workers.

The UMWA immediately knew that Pittston’s aggressive stance was a cause for concern, as the union had gone through a similar battle several years earlier with A.T Massey Coal in West Virginia after that company had also refused to sign on to the national contract, and instead insisted on negotiating with each mine separately. The ensuing strike was complicated and messy, involving injunctions against the union and attempts by the company to permanently replace the striking workers. In the end, the union was saved from likely defeat only when Massey was found guilty of unfair labor practices by the NRLB, prompting a compromise settlement to the strike.

In the aftermath, the message to both employers and unions was that if a company were belligerent enough, it could impose its will on its employees, even in a union stronghold like West Virginia. From the Massey strike, the UMWA learned that a fundamentally different and more militant strategy would be required in future labor disputes.

By fighting a militant battle that at times went far outside the bounds of labor law, the mineworkers at Pittston were able to avoid the fate that befell millions of trade unionists in the 1980s and 1990s. Lead by Richard Trumka, before he went on to become president of the AFL-CIO, the Pittston struggle would ultimately show how a committed and unified international union with a militant membership and workers willing to disregard the restrictions of the system of labor control could fight back against a union busting company.

The Pittston strike went through several phases. During the initial phase, the UMWA, in a change from longstanding tradition, continued working even without a contract. This reflected the recognition by the union that tactical flexibility was required if they were going to have any chance at success.

While the workers remained on the job, the UMWA engaged in a typical corporate campaign, attempting to put public pressure on Pittston Coal from a variety of angles. After a year of waging this campaign, it became apparent that the union was not generating enough pressure to force Pittston Coal to settle. On the contrary, the company was now threatening to impose a contract, and, to back up that threat, it began to hire scabs. With the corporate campaign unable to force the company to back down, the union authorized a strike in 1989. In a wise move, the UMWA declared that the strike was over unfair labor practices, which, if upheld by the NLRB and the courts, would penalize Pittston Coal for hiring permanent replacement workers.

Once the strike began, the union engaged in legal picketing. However, Pittston went to court and obtained injunctions limiting the ability of the union to picket. If the UMWA had played by the typical script of the 1980s, it would have obeyed the judge, kept up a symbolic picket or two, and hoped that the unfair labor practice charges would eventually stick. Then, if they were lucky, the union members may have gone back to work with a concessionary settlement.

Instead, the UMWA opened up a new chapter in the struggle, characterized by non-violent civil disobedience. On April 18, 1989, the daughters of Mother Jones, a woman’s support group named after the revered mineworker organizer from the turn of the last century, conducted a thirty-hour sit-in in the lobby of Pittston’s headquarters in Lebanon, Virginia. At the same time, mineworkers and supporters began blockading roads leading into the plants. Thousands of strikers and supporters were arrested in these acts of civil disobedience, but the point had been made that the workers would not back down easily.

Pittston Coal then went back into court to try to get the union tactics enjoined. Not surprisingly, state and federal judges agreed with the company, imposing millions of dollars in fines on the union, and briefly jailing the strike leaders for contempt. In addition, ignoring the conduct of Pittston and its union-busting security force, Vance Security, (union members complained that Vance was instigating vandalism to make the union look bad, harassing union supporters, and even pointing rifles at striking workers), the judges instead bitterly denounced the mineworkers.

In response to the injunctions, the UMWA responded with strategic flexibility, backing off on certain tactics while opening up new fronts. In June, in response to the contempt citations for their larger civil disobedience actions, the mineworkers switched to smaller actions using convoys of vehicles to block roads leading into the mines.

It is important to note that at each stage of the struggle, the UMWA created a culture of solidarity among its members. For example, strikers adopted camouflage as their official clothing, which helped create group cohesion and fostered an identity of a militant unit of guerilla fighters up against a corporate behemoth. Additionally, with everyone wearing the same clothing, it was harder for Vance Security and the police to single out specific strikers. On nearby land, the strikers also opened Camp Solidarity, which housed thousands of supporters during the strike.

On September 17, 1989, the union upped the stakes when 98 miners and a member of the clergy dressed in camouflage entered the Pittston Coal treatment plant. They approached the security guards and informed them they were peacefully taking over the plant. Like the sit-down strikers of the 1930s, the miners were protected by thousands of strikers outside the plant. Although the sit-down ended several days later, it was becoming clear that this struggle was going to be different then other union/management conflicts of the era.

The strike then entered into what can best be described as a period of rank-and-file lawlessness, with strikers and their supporters disabling cars using jackrocks, which are nails welded together so one side always faces up. As Richard Bribane explains in his book about the Pittston conflict, "A Strike Like No Other:"

The lawbreaking also included the anonymous vandalism of Pittston, Vance APT, and private vehicles; rock throwing at vehicles belonging to company, guards, Pittston supervisors, and replacement workers; rocks thrown at and hitting the skid of a hovering state police helicopter; the extensive scattering of jackrocks, loose nails, plastic pipes studded with nails, and other devices to puncture hundreds of vehicle tires.

In an attempt to spread the conflict, individuals wearing masks so they could not be identified began setting up picket lines at other mines in the area. This expanded the strike and put pressure on other mine owners and the government to intervene. While these actions were not officially sanctioned by the UMWA (and strikers alleged that some of vandalism was actually committed by Vance Security to tarnish the union), union officials did not condemn these tactics.

After nearly a year of struggle, the strike finally ended on February 20, 1990. Unlike other failed strikes of the 1980s and 1990s, the mineworkers had successfully resisted the concessions that management had been trying to impose upon them. In the end, they kept their fully employer paid health care, maintained their retirement benefits, and even secured a wage increase. The Pittston miners had showed how, with membership mobilization and a refusal to play by rules that favored management, a union could win a strike in the modern era.

From REVIVING THE STRIKE: How Working People Can Regain Power and Transform America by Joe Burns. Copyright (c) 2011 by Joe Burns. Reprinted with permission of Ig Publishing, Inc.