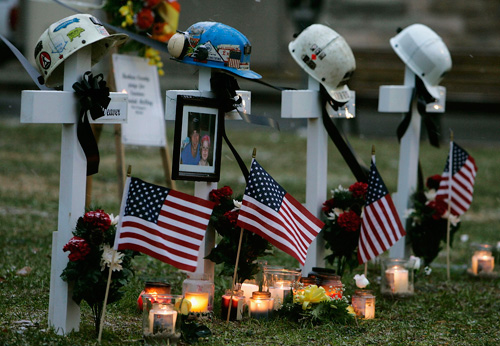 Mining unions have long advocated for more safety protections in the extremely dangerous occupation, and the United Mineworkers of America was instrumental in passing the 1969 Mine Health and Safety Act. Recent high-profile coal mining accidents, including the one at Upper Big Branch mine in April 2011, have been in non-union mines.

Yet according to a recent study by Stanford law professor Alison D. Morantz, previous studies have found no strong correlation between unionization and improved safety in mines—in fact, some have indicated union mines were more dangerous.

Dubious, Morantz set out to do her own work. Analyzing 15 years of data for underground bituminous mines with what she calls a more comprehensive data analysis approach and updated data, she finds significant safety benefits to unionization:

I find that unionization predicts a substantial and significant decline in traumatic mining injuries and fatalities, the two measures that I argue are the least prone to reporting bias. These disparities are especially pronounced among larger mines. My best estimates imply that overall, unionization predicts about a 17-33% drop in traumatic injuries and about a 33-72% drop in fatalities.

Morantz studied data from underground bituminous mines from 1993 to 2008, a period when unionization rates fell sharply—from 21 percent to 9 percent in these mines—yet the safety protections of unionization appeared to increase significantly. Workers at union mines are also more likely to receive workers compensation benefits.

In one curious finding, her work like past studies showed total injuries—including minor ones—were higher in unions mines. That could be because union workers are more likely to report injuries, theoretically leading safety issues to be addressed before traumatic accidents or fatalities happen. The study says:

Non-union miners may fail to report legitimate injuries due to a fear of reprisal from their employers. On the other hand, some unions may encourage, or at least facilitate, the reporting of fraudulent or exaggerated claims … Even in the absence of outright employer intimidation or employee fraud, institutional norms may differ regarding what “counts” as a compensable occupational injury.

Morantz controlled scrupulously for various variables, and questioned why her results differed from prior literature. She noted that several past studies only looked at unionization as a sideline without doing adequately detailed analysis to understand complicated factors.

A 1978 study of West Virginia and Kentucky mines that did focus specifically on unionization and safety  found less safe conditions in union mines, though Morantz noted critiques of their methodology. Of that study, she wrote:

They hypothesize that the union job-bidding system, and/or union miners’ postulated lower job motivation and productivity, could explain these results.

Morantz notes that mining unions in the 1970s may have been hampered in their safety efforts by extremely contentious relationships with mine owners – there were 414 strikes in bituminous coal mines in 1978 alone.

Her study did have something in common with past research in finding improved safety at larger mines. She wrote:

Unions at large and small facilities may differ in their capacity to exercise their “walkaround” rights during MSHA inspections; to form powerful health and safety committees; to independently conduct inspections; and to enforce open-door policies among safety and health personnel.

Aside from potential analytical inadequacies in past studies, Morantz hypothesizes that in the last two decades unions have become much more effective at promoting safety than in the 1970s when most previous studies were done. Unions apparently made safety more of a priority in recent decades, she wrote, particularly since Richard Trumka was elected to head the UMWA in 1982.

She notes that surface mines (strip mines and mountaintop removal operations) are much less likely than underground mines to be unionized. While workers in these mines don’t suffer the same risks of explosion or black lung disease that underground miners do, accident rates are still high. Overall rates of injuries have fallen for both union and non-union mines over past decades, though the rates of traumatic injuries have remained relatively constant, except for a modest decline in the rates of traumatic injuries at union mines in the last decade.

The miners killed in the January 2006 Sago disaster in West Virginia were non-union, and a later investigation by the United Mineworkers of America found problems union President Cecil Roberts said would have been detected and addressed earlier with a union.

It said the company’s substandard mine seals, the mine’s ventilation system, the lack of adequate oxygen devices inside mine shafts, no safety chambers, no two-way communications, no tracking devices, and no onsite, experienced mine rescue teams all played roles in the tragedy.