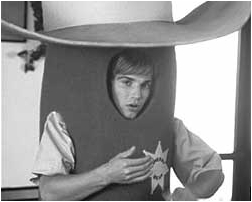 BY James Parker
Share TweetReddit0 EmailPrint
I was duped into seeing Grind. Duped! I heard that it featured Bam Margera, pro skater and one of the Jackass crew, and went along in hopes of some Jackass-style entertainment: panting idiotism at play, wild skaters rising and horribly laughing like sparks of anarchy. What I got was a low-end road-trip buddy movie gross-out teen romance comedy mounted incompetently on a slow-moving skateboard, with a first-time director and virgin lead actors—an authentic cinematic waste product. My viewing of Grind—or Rind, as the marquee outside my local cineplex has it—was duly attended by various symptoms of deadness and abandonment (two other people in the audience; overhead lights left on, prison-like; here and there a broken seat lumpily shrouded in black plastic).

Nonetheless I enjoyed myself. There are few things as true to their own nature as the authentic waste product, and Grind smells richly and sincerely of failure. This flick will make no money: It is its destiny to lose money. By the simplest laws, by biological fiat, it must be so: From time to time there must be a cleaning-out. The knackered plotlines, the dead formulae, the impotent jokes—all things expired, exhausted, rejected and un-nutritive—must meet and make a compact in the darkness, away from the light of the mind, and be got rid of.

Honey-blonde Eric (Mike Vogel) wants to be a pro skater. His ambition is chaste—he wakes up every morning under an action-shot of Tony Alva (a real skater) and dreams of meeting the great Jimmy Wilson (not a real skater)—he has consecrated himself to his sport. He wants to get sponsored and have skateboards named after him and leave his job at Chili ’n’ Such. He feels he has the talent (we have to take his word for this)—all he needs is the exposure. So he makes diffident overtures to passing pros, limply offering them a videotape, his personal showreel. One of these pros is—yes!—Bam Margera. We remember Bam from the Jackass series and movie as a watery-eyed simpleton thrashing his meager body with loony skate-stunts or attacking his father in the night with a toilet plunger—avid, Oedipal, unsettling.

But in Grind, in this low company, he is changed, changed utterly; he has Byronic glamour and self-possession; his shirts are mauve and he flourishes long, contemptuous fingers at the “haggard-ass chicks” who offend him. Lamprey-pale under clotted black locks, he parts the nodding bouncers—“He’s with me,” says Bam. But Bam is finally no help, so Eric must take matters into his own hands. He must go on the road with his three skate-buddies as the unsponsored Super Duper skating team, and do bootleg sessions at professional events in the hope of being spotted. His buddies are purely typed: a wiry collegiate nerd, a smooth-talking classic-rock loverboy (a knock-off of the great Wooderson in Dazed and Confused), and a terrible bulbous id-figure called Matt (Vince Vieluf), farting and guffawing, whose province is “toilet humor”—he literally stands in a toilet, laughing at himself.

None of this would be too terrible, were it not that Grind is so very, very poorly made. The dialogue is not bad. “We’re all sharing one heartbeat like a herd of great elk!” is a nice line, and writer Ralph Sall has a bit of way with the skater’s dopey jargoning—“I totally didn’t see you for who you were,” murmurs the hero to his girl. But to look at? Almost every frame sags with unbalance, like a hastily-packed bag of groceries. The editing is straightforwardly, even honorably, atrocious, as if its atrocity were a point of principle: Certain images are so abruptly spliced as to suggest dislocations of a dream sequence. Where am I? What just happened? At a scene in a club there seems to be a problem with the sound—is someone sitting on the speaker?

Granted, a skateboard movie brings with it certain technical considerations. The filming of stand-ins, for instance, of the skaters who perform the tricks your actors cannot, must be a difficult business. At least, director Casey La Scala makes it look difficult. Grind’s crucial skateboard antics are revealed to us in bungled glimpses, as La Scala’s stuntmen whizz by with their heads cropped out-of-shot, or in demented silhouette, or with faces averted under stiff, mad wigs. The effect is sinister—they look like flying transvestite burglars.

I might daintily tweezer out a couple of moments that are as we critics like to say “not without merit”: Tom Green’s brief turn as a fried skater-DJ is a deeply-buried jewel of a performance, of the sort that one only finds in waste product, and Bobcat Goldthwait stands winningly at the rim of a motel swimming pool, belly out, wearing tiny shorts, squinting in infantile bafflement and making sexual slap-slap noises with the heels of his hands. Grind is to be seen in a mood of passionate cynicism, or not at all.