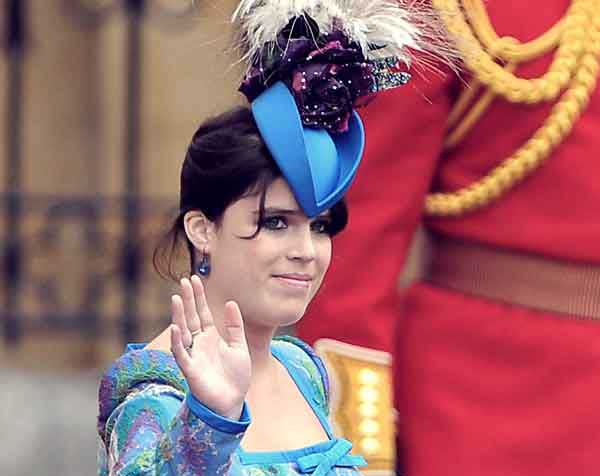 Princess Eugenie of York, 21 and sixth in line to the throne, dons her finest for the royal wedding. (Photo by Pascal Le Segretain/Getty Images)

Here in the U.K., we're nearly all ambivalent about the strange institution we're saddled with, and the dysfunctional family at its center.

The Queen of England (as I think I’m allowed to call her) had a busy May. She went to Ireland, a triumphant visit and the first time an English monarch has been there for 100 years. Colm T–ib’n, the novelist, voiced a general satisfaction with this new friendliness, which may also serve to promote the interests of an Ireland mired in debt and difficulty. This year, 100,000 Irish men and women are expected to emigrate. T–ib’n regards the queen as “dutiful and serious,” which she is. Meanwhile, we’ve been drowning in words like “historic” and “symbolic” and that other awful favorite, “iconic.” Journalists flocked to Dublin, and many more policemen. A bomb left in a bus on the outskirts of the city was defused the night before the queen arrived, so the streets were abruptly emptied of people, and the sounds made by a small crowd of protestors 400 meters away were successfully muffled.

The queen can usually be counted on to say nothing surprising or inflammatory, though the speech she gave in Dublin (rumored to contain offerings from a distinguished Irish writer) acknowledged a history of suffering and wrongdoing on both sides. Her husband, the Duke of Edinburgh, looked as if he wouldn’t mind saying a thing or two, given half a chance. But he wasn’t, and is patiently awaiting his 90th birthday. Two days later they were back in London welcoming Barack and Michelle Obama. Think of the effort. Changing the bedding in time, dusting the palace, getting organic things in for breakfast. Just working out the seating for the banquet apparently took seven hours. I hope the duke gave her a hand. A friend of mine met the queen many years ago and was impressed by her gentle cognizance–just this side of schadenfreude–of the pickle the United States had got itself into in Vietnam. He thought that despite her sometimes grim demeanor she had a sense of humor.

And she’d already managed that wedding. There were several “Fuck the Royal Wedding” parties on April 29, as well as a lot of the other sort. I was asked to one of the first kind and was embarrassed when my heart sank at the thought of missing it all on television. My host had to cancel his party for quite unroyalist reasons, so I spent a happy morning watching–without my menfolk–the carriages and clothes and hats and bishops, and hearing who’d been asked and who hadn’t. Tony Blair and Gordon Brown weren’t there: a punishment, some say, for outlawing fox hunting. Sarah Ferguson wasn’t there either. Her daughters Beatrice and Eugenie made up for it in outlandish style. One wag, referring to Princess Eugenie, observed, “God help us, five dodgy vol-au-vents and she’s Queen.” A survey established that less than half the population of the United Kingdom watched the wedding on television or on the street.

Here in the U.K., we’re all, or nearly all, ambivalent about this strange institution we’re saddled with and about the recognizably and perhaps forgivably dysfunctional family at its center. I wish I knew quite why I should want to watch these strange people at their play and in their hats and uniforms doing what they do. I don’t know them. They spend their days doing things I’ve never done, just as I spend mine doing things they’ve probably never done. I’m not keen on titles or sycophancy or servants or hats or blood sports, let alone dull military music of the late 19th century, nor, indeed, on Godly injunctions to love, bear fruit, obey and so on. I was once at a party to which Princess Margaret had been asked, and was told that if I encountered her I should curtsy at once and on no account leave the party until she had. These seemed impossible orders (I was a foot taller than she was, for one thing) and I ducked both, avoiding the curtsy and slinking off before midnight.

I don’t want to meet them. I just like wondering about them sometimes, as you might about Jane Austen’s Elizabeth Bennet or Leo Tolstoy’s Natasha Rostov. Perhaps they long to escape it all, live like the rest of us, or just wander off as Tsar Alexander I (1777-1825) is supposed to have done. I can’t imagine a life where one was always on show, there to be admired, perhaps, but also to be excoriated. I am curious, however, as millions of people seem to be, as to how these people do it.