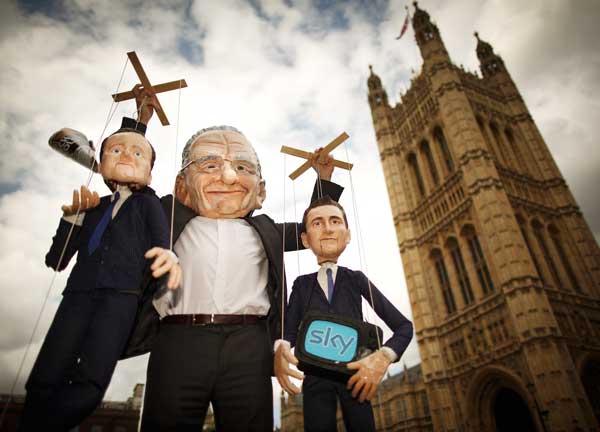 The master puppeteer has had some fun with British Members of Parliament. (Photo by Peter Macdiarmid/Getty Images)

Amorality in the U.K.

While the U.K. press has wallowed in the belief that the public is appalled by the privacy invasions of vulnerable people, many of us have assumed for some time that such things went on.

LONDON—We’ve been high on Murdoch media revelations here since early July, when the Guardian reported that the now-defunct News of the World hacked into the voicemail of a murdered 13-year-old girl. But while the U.K. press has, by and large, wallowed in the belief that the public is appalled by the privacy invasions of vulnerable people and celebrities (see Chris Lehmann’s recent article for all the scandalous details), many of us have assumed for some time that such things went on. These phone hackers, after all, were paid huge sums by their employers. I believe most people in the U.K. are more angered by intimidated politicians bootlicking Murdoch and his mafia, by the growing evidence of police corruption and their involvement in criminal journalistic activities–and especially by their cover up.

We have had more than a decade of seriously dodgy public life, from the government lying about WMDs in Iraq and its encouragement of the banks’ unregulated and risky dealings to the abuse of expense accounts by Members of Parliament (MPs). In a swipe at how little MPs are paid, Rupert Murdoch brought that last scandal up while testifying before a parliamentary committee in July. MPs should be paid $1 million each year, he said, so there’ll be no more talk of expenses.

Gordon Brown has been more or less silent since he ceased to be prime minister just over a year ago, but in mid-July he was a roaring Job in the House of Commons, blaming his most senior civil servant for advising him not to investigate Murdoch just before the general election. He didn’t explain why he took advice he disapproved of.

Asked recently whether he reads the Guardian newspaper, the Duke of Edinburgh replied, “No fear” (slang for “of course not”). We Brits are partisan and snobbish about our newspapers. I’d have the Duke down as a Telegraph man, whereas I’m all too obviously, I’m afraid, a Guardian woman, who has seldom read the tabloid News of the World. (Meanwhile, we apparently aren’t very good at protecting public TV; Murdoch’s rather successful attempts to clip the wings of the BBC have been resented for a long time by many who regard that institution as virtually sacrosanct.)

An 80-year-old woman I met recently remembered how her mother primly admitted that of course she didn’t read the News of the World for the dirt. “But,” she insisted, “you have to know about these things.” And wouldn’t that newspaper have relished the sheer rush and explosion of news about what led to its own demise, and our expectation that there is much more to come? We wake daily to new resignations, apologies, volte-faces. We discuss each speech for hidden meanings, accusations, hints about what we may still be told.

There’s a temptation to wonder whether the world was always as corrupt as it has seemed during the years of this new century. Perhaps it is that dirty deeds were once done more decorously. A permanent theater of exposure, of public inquiries and commissions into the lies of bankers, politicians and newspaper owners has certainly not encouraged trust in the powerful.

There are those among both the revealers and the revealed who claim to welcome the furor as a healing clean-up exercise, that we’ll learn from it and see that “it never happens again.” Ed Miliband, who has wilted as leader of the Labour Party, is now St. George, well into his stride, as he dissociates himself from the Blair/Brown sycophancies and hails the prospect of a dismantled Murdoch empire. That now looks likely enough to occasion an expression of pity for Rupert, an ailing old fox wondering whether he’ll be hunted down in the United States. He assured the parliamentary committee that it was “the most humble day of my life,” and he had his wife to thank for the swift deflection of a shaving-cream pie attack by a comedian. Being led away by police, the prankster reportedly informed the mogul that he is “a naughty billionaire.”

This story has been slightly updated for web publication.