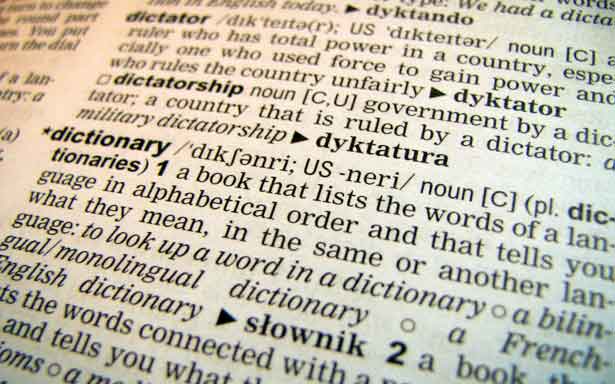 Dictionaries may be useful, but they can't keep up with language's evolution.

The English Language Ain’t That Bad

My father possessed strong views about linguistic matters, but I've prided myself on encouraging verbal laissez-faire among the young.

The quarterly journal I edit recently published a pair of scholarly articles on how English has changed over the centuries and how teachers might make use of these changes. My editorial for that issue of Changing English declared that “the English language has a long history” and “has thrived on change and has resisted the fixed, the conventional and the anodyne with a wonderfully sturdy capacity to renew itself.”

I grew up with a father possessed of strong views about linguistic matters, which he did not keep to himself. But I’ve prided myself on encouraging verbal laissez-faire in the young. When I taught English years ago, I would often be asked whether it was all right to use “language,” which meant “bad language.” “Go ahead,” I’d say, “so long as there’s some point to it.”

But, in truth, I’m squeamish when it comes to some recent novelties. Can’t you see what the problem is, I want to ask, with “unacceptable” and “bottom line” and “at the end of the day”? Why has “mouth-watering” become “eye-watering”?

In England, objections to other people’s language tend to start from class, educational and then regional differences, and could be said to travel in more than one direction. “Posh” language, “la-di-da” speech that sounds too like written language, is mocked, just as dropped aitches (‘aint’ is the most obvious one) and confusions about “I” and “me” may be. In her marvelous book, Verbal Hygiene, Deborah Cameron, the Oxford linguist, writes about an upper-class woman emerging from a spell in prison to insist that the worst thing about it was other prisoners “mangling the English language.” As Cameron writes: “She wanted her audience to believe that she had borne without complaint the loss of her liberty, the humiliation of being labeled a common criminal, the lack of privacy and of luxury, the separation from loved ones; but that having to hear the other women’s glottal stops and split infinitives … had driven her to distraction.”

Even my father would not have gone as far as that, despite his tortured dismay at what things had come to.

I don’t think that my sudden explosions of linguistic disapproval are provoked by class or education. I am learning to accept that “hopefully” and “disinterested” mean something different now and that their old meanings may be beyond rescue. (Even if disinterested’s replacements–“unbiased,” “unprejudiced,” “impartial,” for instance–can’t quite stand in for it.)

What I mind more are those formulaic phrases drummed up by politicians and flaunted by journalists as ways of deflecting questions, reassuring us when we shouldn’t be reassured and cutting off arguments. Some are meant to suggest conviction, which is apparently always a good thing, even when it’s obviously misplaced. We’ve had prime ministers recently “passionately believing” things, and entirely sure that something is “the right thing to do.” These weasel words bypass the expectation that we might be told exactly why we have gone to war, why the National Health Service will be even better once it has been privatized, why bankers must be indulged and everyone else must take it on the chin, and so on.

New phrases for “reforms” have inexplicably become essential. Perfectly workable institutions are described as “not fit for purpose.” We are told to ignore what has gone wrong, forget who caused the trouble, “draw a line under it” and “move on.” Perhaps contemporary political jargon is no more obfuscating than it ever was. Perhaps language changes too fast for us, so we stick to the clichés and formulae of our younger days.

The curious thing is that the inventions of the young, the abbreviations, the new meanings for “hot,” “cool,” “chill,” “dope,” “buff,” “fit,” “lame,” seem alive and promising in comparison, derived from their own quite different experience of literacy and communication. I’ve heard, for instance, that those texting and tweeting revolutionaries in Cairo’s Tahrir Square and other parts of the Middle East have developed ways of writing colloquial, spoken forms of Arabic that not only express their new meanings but, unlike classical written Arabic, allow them to represent their linguistic differences from one another. I shall remember that next time I find myself wincing at some unbearable neologism.