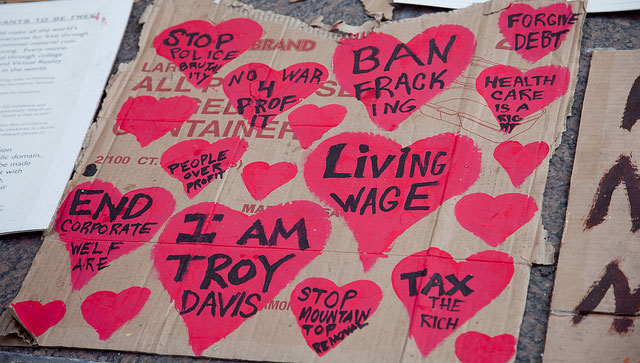 One of many signs placed on the ground at Zucotti Park, NYC, by Occupy Wall Street activists. (Photo by Lindsay Beyerstein.)

The occupation of Zuccotti Park is an experiment in direct democracy.

America’s political classes would do well to listen to the grievances of those involved with Occupy Wall Street, for they undoubtedly represent a set of anxieties shared by a great deal of the population.

You wouldn’t know it from the news headlines in the United States, but for the past ten days hundreds of activists have been protesting 300 metres from the heart of Wall Street. On September 17th, activists converged in the heart of New York’s financial district, intent on occupying Wall Street. They were rebuffed by the police from that goal, and have instead began occupying the nearby Zuccotti Park, now renamed Liberty Plaza. The movement, called Occupy Wall Street, was sparked by the Canadian group Adbusters, and has captured the imagination of many on the Left hopeful for signs of an American version of the Arab Spring.

Yet much of the media have dismissed the Occupy Wall Street protests as out-of-touch hippies. In the New York Times, Ginia Bellaconte sneered at one protester “with a marked likeness to Joni Mitchell and a seemingly even stronger wish to burrow through the space-time continuum and hunker down in 1968.” She noted the protesters’ lack of a clear unifying demand, stating that “the group was clamoring for nothing in particular to happen right away.”

But this misunderstands the nature of the protest—the protest appears to be, in many ways, the right to a functioning democracy. With the nihilistic GOP-created debt ceiling crisis, the possible inability of the postal service to pay its bills, and another looming shutdown over a stand-off about disaster recovery funds, it is clear that there are indeed serious problems with the established American political process.

GlobalComment writer Anna Lekas Miller, on the scene in New York, told Tehran’s PressTV that Occupy Wall Street marks a disaffection from the American political system, a sense that it is impossible to create change within the two-party system:

I think there was a time that you could—speaking of FDR (President Roosevelt)—but right now you can’t because there has been a corporate takeover of politics.

You have something called ALEC—the American Legislative Exchange Council—where corporations literally will pay huge sums of money to get together with politicians, draft model legislation that is, then put across the US through state legislation, which is easier to pass than federal legislation.

In 2010, the Supreme Court ruled in the Citizens United case that there is no limit on the amount of money corporations can spend on political campaigns. With the legal doctrine of corporate personhood, corporations with deep pockets have a far greater voice than ordinary citizens–as the political moves of the far-right Koch brothers in Wisconsin and elsewhere have shown. (See the October 2011 In These Times cover story by Joel Bleifuss, "Corporations Are Not People,” for more on the history of corporate personhood and the movements working to dismantle it.)

At the same time, as has been highlighted by the direct action group US Uncut, many corporations do not pay taxes at all. In 2010, the nation’s largest corporation General Electric, for instance, was paid a 3.2 billion benefit, incredibly making a profit from their taxes. Despite corporate personhood, corporations are far from responsible citizens of the country they do business in. No wonder protesters are chanting “pay your share” on Wall Street.

It is unsurprising therefore that some activists would seek to create an alternative to a corporate dominated democracy. Occupy Wall Street have been holding two “people’s assemblies” a day and intermittent marches, bypassing the media by providing their own livestream video and website, and spreading information by social media networks like Twitter. Nathan Schneider, editor of Waging Nonviolence, told Democracy Now! that “the core demand I think right now seems to be the right to organise, to have a political conversation in a public space. To show Wall Street, so to speak, what democracy looks like.”

The Occupy Wall Street movement has something in common with the Greek aganaktismenoi protest movements’ recent experiments in direct democracy. In July Costa Douzinas reported that in Syntagma Square in Athens,

Thousands of people come together daily in Syntagma to discuss the next steps. The parallels with the classical Athenian agora, which met a few hundred metres away, are striking. Aspiring speakers are given a number and called to the platform if that number is drawn, a reminder that many office-holders in classical Athens were selected by lots. The speakers stick to strict two-minute slots to allow as many as possible to contribute. The assembly is efficiently run without the usual heckling of public speaking. The topics range from organisational matters to new types of resistance and international solidarity, to alternatives to the catastrophically unjust measures. No issue is beyond proposal and disputation. In well-organised weekly debates, invited economists, lawyers and political philosophers present alternatives for tackling the crisis.

Despite this laudable methodology, and with a far greater attendance than that of Occupy Wall Street, the protesters in Syntagma have failed to create substantive change to the struggling Hellenic Republic.

It remains to be seen whether the new direct democracy will result in meaningful political change in the United States. The skeptical media coverage is correct on that score—without concrete political demands, it is difficult to imagine that happening right now.

But America’s political classes would do well to listen to the grievances of those involved with Occupy Wall Street, for they undoubtedly represent a set of anxieties shared by a great deal of the population. The corporate take-over of the American political process has not gone unnoticed, neither has the disparity between continued Wall Street profits and the cuts to the welfare state. As unemployment continues at high numbers, resentment surely stirs among those whose lives are slowly being drained at the expense of the corporate state.

The NYPD certainly seems to see Occupy Wall Street as a threat, arresting over 80 people over the weekend. Videos uploaded to Youtube show officers apparently pepper spraying protesters, punching and dragging protesters. Alison Kilkenny at The Nation points out that this comes in the greater context of a suppression of Left wing activism in the United States, stating that “we know for a fact that the F.B.I. monitors activism groups, and this practice reached a frenzied level during the Bush administration years. These intimidation practices continue under President Obama in the form of raids.”

For all its militant-sounding rhetoric of occupation, Occupy Wall Street is unlikely to create revolutions—it is instead a utopian experiment at re-imagining the foundations of the democratic process. However, if the economic situation does not improve, and Republicans achieve the significant cuts to vital social programs like Medicare, Medicaid, Social Security and food stamps that they have been pushing for, the United States will nevertheless indeed be on the brink of violence. A populace without jobs or social services is an angry, desperate one.

And if that happens, we should look to London for what happens when public resentment has no political voice. The UK riots that kicked off in Tottenham were preceded by an unsuccessful mass movement against the Cameron government’s austerity measures, but were themselves an anti-political, violent rampage of disaffection. It is hard not to wonder if the same will occur in the United States sooner or later, if the interests of the greater public continue to be sidelined for those of corporations.

Emily Manuel is editor-in-chief of GlobalComment.com, a web magazine featuring writers from all over the world. An Australian, she lives in Baton Rouge, La., and blogs for Tiger Beatdown.