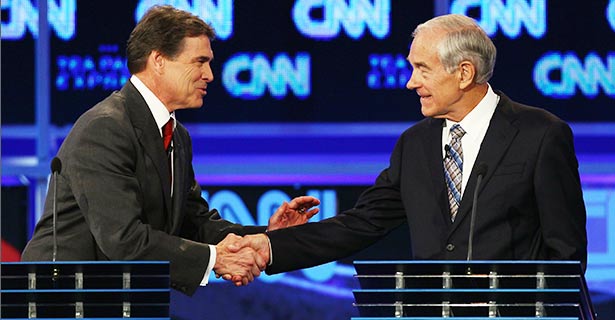 Why are some Americans so comfortable letting fellow citizens die?

Some features of our republic’s political id are best left unseen. One such unlovely sight erupted into view in September during the monumentally inept CNN/Tea Party Express debate, when host Wolf Blitzer sought to test the limits of the GOP field’s free-market fundamentalism in healthcare policy. Quizzing the libertarian insurgent in the field, Texas Rep. Ron Paul, Blitzer asked how our society should deal with a hypothetical 30-year-old man who decides to forgo health coverage, but lapses unexpectedly into a coma and requires critical care to save his life.

Out came the slogans. “That’s what freedom is all about – taking your own risks,” Paul replied in full Randian throttle. “This whole idea that you have to prepare and take care of everybody – ” at which point Blitzer broke in to ask, “Congressman, are you saying that society should just let him die?”

Paul, a medical doctor, then proceeded to walk back the implications of his pro-freedom broadside, arguing for churches to step in as private charities supplying emergency healthcare. But the fired-up Tea Party hecklers were having none of it; audience members cheered Paul’s rhapsodic defense of potentially lethal freedom.

The moment justly earned sober derision from the pundit class, and like many cable-fueled lurches beyond the guardrails of responsible debate, it was mostly forgotten. But the underlying premises that fed this ghastly outburst deserve closer consideration.

In truth, no political persuasion is consistent or principled when it comes to the thorny ethical dilemmas having to do with the ends of life. The two signature policy issues in this realm, abortion and capital punishment, typically get contorted out of all coherent shape for the sake of accommodating overriding political agendas. Even an individualist purist such as Paul, for example, doesn’t concede that personal freedom should legally extend to the voluntary termination of a pregnancy. And while Paul goes out of his way to try to depict abortion as a state-sanctioned assault on the integrity of the fetus, it’s hard to disregard the fact that the odds of a pro-choice Republican winning election in Texas today are somewhere south of nonexistent.

Indeed, in that same CNN debate, Texas Gov. Rick Perry defended the idea of mandating that state schools administer the human papillomavirus vaccine to sixth-grade girls on the grounds that he was passionately committed to preserving life in all situations – even though at the previous GOP debate, he earned his own awkwardly exuberant round of applause when the moderator mentioned his record of approving 234 executions in Texas.

To complicate matters further, the vision of the technocratic liberal state that provokes putative life-preserving outbursts on the right is also deeply incoherent. On the one hand, Sarah Palin’s infamous Facebook swipe at Obamacare “death panels” hinged on a robotically depersonalized notion of state-administered callousness right out of Brave New World. On the other, Michael Dukakis’ roundly assailed response to a cynical and manipulative question in CNN’s 1988 presidential debate, about executing a hypothetical criminal who might have taken his wife’s life, bespoke a fusty, procedural adherence to the letter of the law that fails to acknowledge the wronged victim’s very human lust for revenge. In other words, liberals are either grimly Stalinist agents of mass extermination or else milksop bureaucrats, perversely devoted to safeguarding the rights of barbarian assailants wiping out their own families.

But then again, the whole point in such exercises is for the liberal worldview to adhere to any script its enemies assign it – so long as it is villainous. After all, the same force that prevents any consistent moral reasoning to take root in our political culture also propelled CNN to join forces with the Tea Party movement in craven and desperate (and, yes, successful) pursuit of audience share: that is, the bedrock conviction that the market is the ultimate arbiter of all our fates.

As that gaggle of Tea Party hecklers reminded America on that dismal September evening, the preservation of life counts for nothing next to the pure and infallible prerogative we assign to the market’s masters.