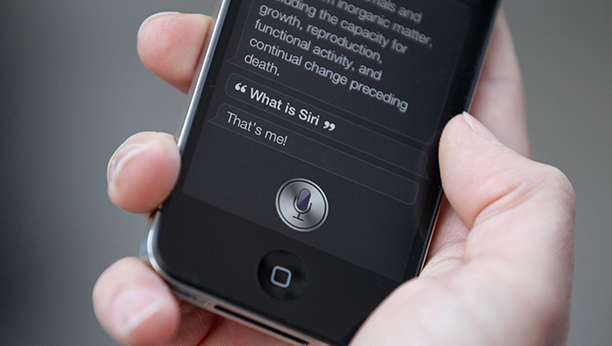 Siri and the High-Tech Gender Gap

The bad habits of the iPhone 4’s voice are a reminder: America’s tech developers are overwhelmingly male.

Last week, tech and feminist blogs erupted with a startling story: Siri, the iPhone 4 app that responds to voice queries with pre-programmed or search-engine-based replies, refused to direct its users to abortion clinics. Not only that: Apple’s Siri seems programmed to respond to sexual or sex-related questions almost invariably as if the user were a certain kind of cisgender man.

Many people don’t believe this is sexist. After all, many of Siri’s answers are generated by searching public databases like Yelp or Google; there’s often little intentionality in her answers. But looking up “blow job” on Yelp, according to blogger and journalist Amanda Marcotte, directs you to hair salons; Google “abortion clinic” in New York, and the page fills up with, well, abortion clinics. It seemed clear that something had been forgotten or omitted during Siri’s development–that is, the fact that women (or, for that matter, recent rape victims and people in need of abortions, no matter what their gender) might eventually use Siri. And this was especially strange, given the fact that so many women are doing important work in the fields of social media and technology.

“It’s not that a group of straight privileged (probably white) dudes sat around and said, ‘I know! Let’s make an app that will make it hard for women to find ABORTIONS,’” social media and tech activist Deanna Zandt said in an e-mail. “What happens is that a group of homogenous developers goes into a product situation with serious blinders on.”

The presumption that Siri’s programmers would most likely be men is not just grounded in our ideas about programming or “nerd culture”; it’s based on numbers.

“Did you know that in 1985, something like 35 percent of graduates with computer science degrees were women?” Zandt asked me. “And now it’s dropped to something like 18 percent.”

That might be a high estimate; if one looks at graduates from engineering schools only, the portion of female computer-science majors drops to 10.5 percent. In 2010, according to Bureau of Labor Statistics, women comprised 22 percent of computer programmers, and 20.9 percent of computer software developers, a number which is even lower than women’s representation in IT fields generally. In open source software, women comprise a mere 1.5 percent of developers.

In response, tech developers and schools are doing crucial outreach to women; Zandt mentioned Girl Develop It, a program designed to get more young women into the field. Kat Bradley, a 23-year-old software developer I spoke to, mentioned having been the beneficiary of mentoring and “several affirmative action type programs.”

And yet, women are undeniably using communications technology, and are doing so in remarkably innovative ways, with measurable real-world impact. If one looks at the headlines about women and social media–or heck, even just the headlines about women and Twitter –this much is plain. The week Siri-Gate broke, blogger Xeni Jardin of Boing Boing, herself one of the foremost tech bloggers in the field, live-tweeted both her mammogram and her positive breast cancer diagnosis. Journalist Mona Eltahawy tweeted from the protests in Cairo until the moment she was arrested–and when she was released, she tweeted the news that Cairo police had brutally beaten and sexually assaulted her. The Egyptian revolution itself, of course, owes more than a little to social media; the originator of the #jan25 hashtag, which protesters used to communicate with each other, organize and share urgent developments, was Alya El-Hosseiny, a female college student.

And all those women owe something to Dana Contreras–“Engineering Manager, Integration”–of Twitter.

“Twitter democratizes communication,” Contreras told me. “It gives a voice to people who might not otherwise be heard. That’s a powerful tool for women. Many of us aren’t used to having our voices heard, and now we have this amazing platform where we can organize, advocate, and speak our minds to the whole world… In the long term, that’s going to have a profound legitimizing effect on women’s experiences.”

But it might not be so easy. Nancy Schwartzman of The Line Campaign says her tireless – and technologically adept–work to raise awareness of gendered violence, sexual assault and consent includes “transmedia” storytelling, including film, blogging, social media, and even an iPhone app. This, she says, has not really been recognized by the tech field at large (although her iPhone app was recently recognized by the White House).

“If my transmedia campaign were about Pirates of the Caribbean and included all of these elements (film, video, blog, active social media accounts, flickr, dedicated community, and iPhone Application) it would be celebrated as an immersive marketing achievement, and I’d be commissioned for thousands of dollars to replicate it,” Schwartzman told me. “But a transmedia platform for young women that doesn’t sell them things? Well, that could almost look like a hobby.”

This was the refrain I heard from many women working in technology and social media: Tech had in many ways revolutionized their ability to reach people, and to create change. But they still had to struggle to be recognized as people finding innovative and crucial uses for the technology. Which brings us back to Siri, the endlessly helpful computerized secretary who can figure out anything, except for the fact you’re a woman. We can talk about gender representation within the field of tech; we can talk about mentoring women and girls, and recognizing their achievements. All of this will be crucial to keeping the technology field from losing women’s talent and contributions, and to ensuring that one of the most important industries of our era remains diverse.

But perhaps the most useful thing for computer programmers looking to avoid Siri-like missteps in their own software would be to look around the next time they leave their cubicle or office, and notice how many women are checking their iPhones.