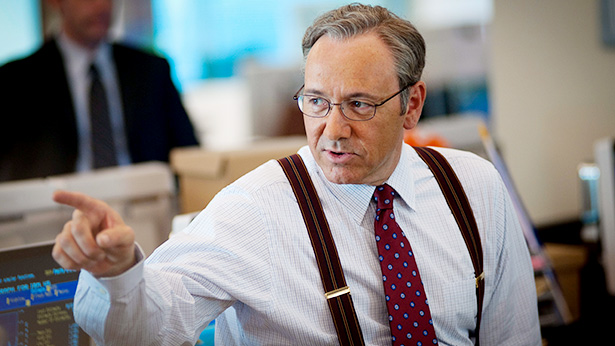 In Margin Call, as in HBO's Too Big to Fail, the truth takes a Hollywood Holiday. (Photo courtesy of Roadside Attractions)

On the big and small screens, the entertainment industry fails to explain why the U.S. economy collapsed.

The central action in Margin Call was meant to echo the downfall of Lehman Brothers, itself an abject retreat into Tinseltown fantasy since Lehman was the outlier bank in the great mortgage conflagration.

As protesters continue to provoke fresh real-life confrontations with our financial oligarchy, the American culture industry has followed its own instinctive path, forging heroic narratives about the nation’s financial woes that gravitate into a Neverland of angst-ridden comeuppance and consensus.

This fall’s Serious Hollywood Statement on the 2008 crisis, Margin Call, deployed an armada of scowling method actors to erect a mythical tale of a frenzied market dump of toxic debt. The central action in the film was meant to echo the downfall of Lehman Brothers–itself an abject retreat into Tinseltown fantasy since Lehman was the outlier bank in the great mortgage conflagration–the one investment shop that regulators did not treat as too big to fail.

And this, evidently, is why Margin Call is so afraid to conclude anything about anything–even as it tries to lay out the backdrop to the great financial crime of our century. The film’s final incoherent gesture belongs to Kevin Spacey–whose wounded sense of pride in his vocation resolves ludicrously into elaborate devotions over a dead family pet. Unable to bring this plot to rest on any human-based catharsis or approximation of justice, the movie’s screenwriters reached for the manipulative tear-jerking gambit known in Hollywood as “shooting the puppy.”

Last spring, HBO aired a faux-Homeric account of the global mortgage collapse with Too Big To Fail, a fable about the wholesome protective urges of federal regulators based on the fanciful book of the same name by New York Times financial reporter Andrew Ross Sorkin.

In one particularly anguished-yet-bumbling set piece, William Hurt–who plays former Bush Treasury Secretary and onetime Goldman Sachs CEO Hank Paulson as an implausibly conflicted guardian of the public weal–sums up the absence of significant federal oversight over the gargantuan housing bubble with the pained admission: “Nobody wanted it.” Viewers waited in vain for a character more soundly acquainted with the truth to burst in and paraphrase Jesse Jackson: “You are somebody, Mr. Paulson.”

As Moe Tkacik notes in The Paris Review, Paulson did all he could to prolong the regulatory lapses of his predecessors. She writes, in proper dumbfoundment, “The movie concludes by solemnly crediting Paulson, Geithner and Bernanke for averting a second Great Depression.”

Consider as well this news item that surfaced around the time of Margin Call’s release: The SEC’s management elected to ignore its own HR counsel, and gave nugatory disciplinary measures to seven SEC workers who’d bungled the Bernie Madoff case.

This sloth-like study in discipline came, as Washington Post reporter David S. Hilzenrath dryly noted, the same week that “a federal judge excoriated the SEC for letting firms such as Citigroup settle fraud charges without admitting or denying wrongdoing.”

Another SEC inspector general’s report from 2010 chronicled the jaw-dropping agency conflicts that attended the botched investigation of R. Allen Stanford, who, after Madoff, ran the biggest Ponzi fund in U.S. history. Spencer Barasch, who headed up the Fort Worth, Texas, SEC shop that had jurisdiction over Stanford’s fund, called off an investigation when he was advised nothing shady was afoot in the Stanford fund–by Wayne Secore, Stanford’s own attorney. Barasch now claims he has no recollection of that conversation.

After Barasch left the SEC in 2005 to launch a practice in white-collar criminal defense work, he sought to represent none other than R. Allen Stanford. In 2009, when ethics officials with the SEC balked at Barasch’s repeated pitches to represent Stanford, the former regulator provided an admirably candid account of his motivation: “Every lawyer in Texas and beyond is going to get rich on this case. OK? And I hated being left on the sidelines.”

There you have it: A generation’s worth of moribund federal oversight in the financial sector is neatly summed up as a bald plea for dirty cash. No wonder Hollywood would elect instead to fabricate regulatory heroes and sentimental pet reveries from whole cloth: The dead dog known as the SEC hasn’t been hunting for a very long time.