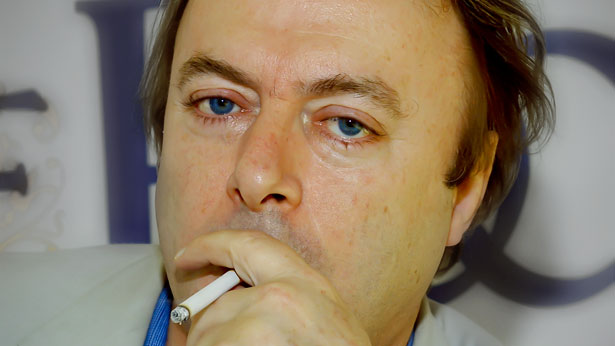 The fawning homages triggered by the prolific polemicist’s death missed the true tragedy of his later career.

Hitchens' ever-shifting rationale for the Iraq war was a textbook study in the situational evasion of unpleasant truths that is the protective coloration of the practiced D.C. pundit.

The impulse to memorialize says as much about the survivors as the departed—and so the confessional frenzy of establishment journalists to mark the passing of Christopher Hitchens, who died of cancer in December, bears some discomfiting scrutiny. Within hours of the news of Hitchens’ death, the online world lit up with fond, nostalgic appreciations—all bearing testimony to the largeness of the man’s intellect and alcoholic stamina, his fiercely iconoclastic spirit and his comradely conviviality.

All of which was true. Like many Washington journalists, I was friendly with Hitchens. Despite our disagreements, he was a charming and unfailingly gracious soul. The graceless world of Washington journalism is diminished enormously with his passing.

This doesn’t explain, however, the obsessive onrush of Hitchens remembrances that D.C. media hands produced in the wake of his death—nor the curious uniformity of their panegyrics. The typical Hitchens homage described a boozy, marathon social gathering and a rueful evocation of the now-vanished golden time that had produced such an outsized, contrarian character.

Among other things, the cottage industry in Hitchens-iana pointed up a wish fulfillment fantasy for Washington’s retinue of pundits for hire and political gossips: Here, it said in essence, was a colorful, impassioned giant in our midst—a latter-day Samuel Johnson. Let our city and our profession bask in his reflected glory.

The trouble is that such beguiling fancies omit a universe or two of causation. It was not that Hitchens’ life was a joyous, Falstaff-style incarnation of the vocation awaiting a brilliant Washington writer. Regretfully, I’d suggest instead that the tragedy of Hitchens’ later career was not that he defined the Washington spirit, but rather he had grown captive to it. Hitchens’ dead-end support for the dishonest and deadly U.S. invasion of Iraq is the most obvious case in point. His ever-shifting rationale for the war—from the imminence of Saddam Hussein’s WMD arsenal to the shameful neglect of the Kurds to the desperately urgent confrontation with “Islamofascism”—was a textbook study in the situational evasion of unpleasant truths that is the protective coloration of the practiced D.C. pundit.

One encounter with Hitchens during the early aughts seemed to signal that this shift was under way. During the run-up to the invasion of Iraq, Hitchens published his own defining appreciation of the outsized contrarian who bore the deepest imprint on his own career: Why Orwell Matters. I was invited to a gathering of the city’s journalists to discuss the book—hosted by BMW in a luxe downtown conference room.

As Hitchens wound down his book talk and the floor opened for questions, I asked what he thought Orwell, the arch critic of the political abuse of language, would make of the locution “preventive war”—then, of course, the mantra of the neocon crowd urging on the toppling of the Saddam Hussein regime. “I think ‘preventive war’ is telling it like it is,” he announced. “And I think Orwell would recognize that.”

I should have offered some kind of counter-parry, but I just couldn’t. Something about the whole scene—the sad corporate conference space, the arid mood of self-congratulation—plunged me into despair. There were certainly other, far more shameless moral and intellectual lapses that came hard upon the Bush administration’s experiment in preventive warfare, but this moment stayed with me. And while I continued to remain cordial with Hitchens, and to admire a good deal of his genuinely brilliant published work, I couldn’t help but think that his “contrarianism”—that vastly overrated, putative Washington virtue—was harming his writing. The book he regarded as his proudest achievement—the atheist polemic God Is Not Great—too often read to me like debate-club score-settling.

I write this in sorrow, not anger; I have fond memories of Hitchens that speak volumes about his devotion to his friends, his fraternal spirit, his restless intellect and his love of family. But I can’t shake the idea that the journalistic establishment that has wept so conspicuously over Hitchens’ loss contributed in no small way to the dying of his light.