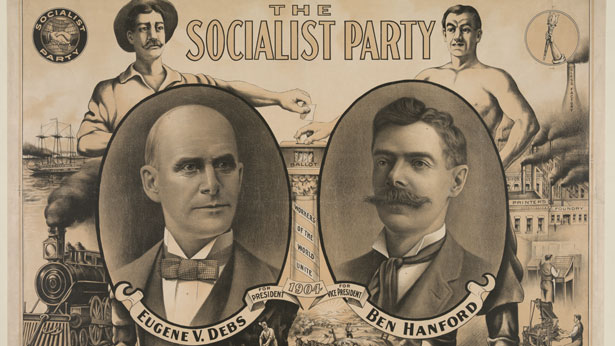 A campaign poster for the Socialist Party ticket for president, 1904.

Why America Needs the Left

The fight for true equality since 1776.

The struggle over what equality means is at the core of U.S. history. Without the Left, liberalism becomes spineless and vapid; without liberalism, the Left becomes sectarian and marginal.

From the beginning of the American republic, most of the country’s thinkers and politicians have argued that our nation neither had nor needed a Left.

Historians of the so-called liberal consensus school argue that the United States has simply always enjoyed agreement on such matters as private property, individualism, popular sovereignty and natural rights. Others claim that the country never developed the leftist working class or peasantry seen in other nations, a claim often termed American exceptionalism. Still others say that the country doesn’t need a Left because it already believes in, or has even achieved, such goals as democracy and equality – a view held by Cold War liberals and neoconservatives.

But these are all false and misleading ways to understand America. The country has always needed, and typically has had, a powerful, independent, radical Left. While this Left has been marginalized (as it is today) and scapegoated (during periods of national emergency), the Left plays an indispensable role during the country’s periods of long-term identity crisis.

The United States has gone through three such crises: the slavery crisis culminating in the Civil War; the Great Depression precipitated by the rise of large-scale corporate capitalism, culminating in the New Deal; and the present crisis of “affluence” and global power, which began in the 1960s. Each crisis has generated a Left – first the abolitionists, then the socialists, and finally the New Left – and together, these movements constitute a tradition.

At the core of each of these Lefts is a challenge to the liberal understanding of equality – the formal equality of all citizens before the law. In the first case, the abolitionists, the issue was racial equality. In the second case, the socialists and communists, the issue was social equality, the insistence that democracy requires a minimum level of security in regard to basic necessities. In the third case, the New Left, the issue was equal participation in civil society, the public sphere, the family and personal life.

But the difference runs deeper still. Behind the Left’s commitment to equality is a passion for emancipation from entrenched forms of oppression. Criticizing forms of domination that liberals tolerate or ignore, the Left stands not only for equality, but also for an enhanced concept of freedom.

When Marx described all of history as the history of class struggle, he gave us the idea of emancipation as a continuous struggle, a project with a deep past and an extended future. In this way, he countered the notion – central to the liberal tradition – that we are already free, or that we live in “free societies.” Further, Marx is the only thinker who has provided a clear and lucid theory of capitalism, a social system organized through the division of capital and labor.

Such a system is distinct from a market or exchange society, as described, for example, in Adam Smith’s Wealth of Nations, or in the works of contemporary liberal economists such as Joseph Stiglitz or Paul Krugman. Such a theory of capitalism lies behind the second term we need to clarify, “crisis.”

Marx insisted that capitalism is intrinsically crisis-prone. The American Left inherited the idea of a crisis from Marx, not just the kind of “economic crisis” that characterized the Great Depression and that afflicts the country today, but also broader crises reflecting Marx’s influence on modern historiography, such as “the crisis of the Middle Ages,” “the general crisis of the seventeenth century” or “the crisis of the modern state.”

A crisis is not simply a calamity. It is a turning point during which decisions are made about society’s future direction. Crises have narrative structures, as in the Greek tragedies, where the subject arrives at a decisive moment and must directly confront his or her fate. It is during periods of crisis that the Left’s active involvement becomes indispensable to the nation.

To understand why, we must distinguish between “normal” periods and crises in American history. During normal periods the country tends to get along with such ideas as individualism, pluralism and private property, and with calls for “pragmatism,” “bipartisanship” and passing beyond “obsolete” Left/Right conflicts. In crises, by contrast, many Americans strive to form a new or revised agreement on values, not a mere compromise.

Crises occur because of epochal transformations in the deep structure of American capitalism. Still, as such they are not merely “economic” crises. Rather, they are tectonic shifts during which Americans re-evaluate their assumptions, values and direction.

During these periods the nation has to look inward and summon up its unconscious and inherited powers, not just rely on its everyday assumptions. And when the nation does look inward, it needs the deep conception of equality that the Left provides.

The three crises we are discussing – slavery, corporate capitalism and hyper-globalization – constitute a counter-narrative to the one that begins with Independence.

Each crisis is associated with a particular stage in the history of capitalism: primitive accumulation in the form of slavery and President Andrew Jackson’s “Indian Removal”; large-scale corporate accumulation leading to the New Deal; and, in the case of the New Left, the shift from manufacturing-based Keynesianism to financial-industry dominance, which began in the 1960s. The shift from each stage to the next was not socioeconomic alone. Each shift, rather, brought a crisis of authority, identity and governing purpose that could not be resolved by reference to the political thought of the Revolution or to the American Constitution.

Understanding American history as a series of three successive crises gives us a new conception of the nation. The actual founding of the United States should be seen in its commitment to equality and justice, not simply to political independence. Each crisis involved a refounding of the country, a transformation of its identity and of its conception of legitimate order, one that placed equality at its center. In each case the Left supplied the indispensable idea of equality that spoke to the country’s identity. In each refounding, moreover, the Left’s role was quite specific.

Without the Left, the meaning of each reform would be ambiguous. Consider the abolition of slavery. As David Brion Davis writes in Inhuman Bondage: The Rise and Fall of Slavery in the New World, the “sense of self-worth created by dutiful work” that replaced slavery could have become either “a way of disguising exploitation” or a spur to redeeming the “equality [of] people of subordinate status.” The abolitionists, the first American Left, secured the latter meaning. Similarly, the powerful mechanisms of the New Deal could have been used either to help rescue Wall Street from its continuing disastrous errors, or to advance the condition of industrial workers, immigrants and Southern blacks. To the extent that the New Deal did the latter, it was thanks to the efforts of the socialists – understood broadly to include a great range of American reformers, including Communists. Finally, the 1960s could have produced either a worldwide democratic transformation centered on an expanded ideal of equality or a meritocratic, sexually liberated, consumption-oriented world of gated communities, mercenary armies and exquisite cafés. The New Left sought to establish the first outcome; to the extent that it failed, the long-term meaning of the episode remains to be seen.

In each of these crises, the Left did not create the call for equality. That call arose, rather, from social movements – that of labor, African Americans and women – sparked by the large-scale shifts in the structure of American capitalism. The Left contributed its part by placing the ideal of equality at the center of the country’s collective memory.

We have been reminded in recent years of how important collective memory is to politics. The Tea Party movement, for example, argues that activist governments contradict the founding fathers’ sacred writ. Originalists insist that the Constitution contains eternal truths. The Left and most liberals, by contrast, argue that the nation’s identity is an ongoing narrative, constantly redefined, but moving in the direction of greater equality.

Thus a crucial moment for the first American Left occurred when Lincoln insisted that the assertion in the Declaration of Independence that “all men are created equal” was “of no practical use in effecting our separation from Great Britain … it was placed in the Declaration not for that, but for future use,” by which Lincoln meant the emancipation of the slaves. Likewise, Eleanor Roosevelt understood the nation’s identity as an ongoing project when she arranged for black soprano Marian Anderson, denied access to the Daughters of the American Revolution Constitution Hall, to sing on the steps of the Lincoln Memorial. The memorial, she grasped, had been put there for “future use.” In his speech to the 1963 March for Jobs and Freedom, Martin Luther King Jr. observed that the Negro after emancipation had been given a “promissory note,” and that the note had come due. Barack Obama ran for President in 2008 as a “community organizer,” implicitly drawing on recollections of the civil rights struggle. In each case, the Left connected the present to an ongoing quest for equality, seeking to re-found the country on an egalitarian basis. Far from being irrelevant, then, the Left has been central to the country’s effort to establish a coherent history.

When we have seen a Right that has genuine intellectual force and charisma – as we got in the United States after the quasi-defeat of the New Left in the early 1970s when the ideals of racial and sexual equality survived but the broader idea of a Left went into hiatus – it necessarily dressed itself up in the leftist vernacular of protest, discontent, minority voice and exclusion. But any attempt to exclude the Left, and to form a coalition between liberals and the Right, cannot resolve the country’s crisis. Only a revitalized Left, which further deepens America’s egalitarian commitments, can move it in a progressive direction.

Eli Zaretsky, a professor of history at the New School for Social Research in New York City, writes about 20th-century cultural history, capitalism and the history of the family. His latest book, Why America Needs a Left: A Historical Argument, was published in 2012.