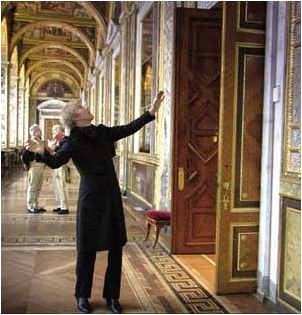 Inside the Russian Ark: Cinema will survive as surely as the Hermitage.

So it looks like the movies made it. Made it through the “death of irony” we heard so much about last year; made it through the countless other obituaries issued by fashionably black pundits, dating as far back as the introduction of sound. They have survived congressional grumblings during election years, the big-screen debuts of both Madonna and Britney Spears, and appear to be holding up nicely against the skittering encroachments of the digerati—some of whom have even been invited to join the club.

And judging from the numbers posted by multiplexes and sold-out festival screenings alike, we seem to want them more than ever, perhaps even despite themselves. (I’ve learned never to argue with a Jedi master in a year when his Holiness dislodges another episode from the Ranch.) Amazingly, the spirit of film seems ever-willing; it’s a straw man’s argument to build a case for cinema’s irrelevancy out of audience apathy or—as tempting as it might be for us panners—the failure of highly paid storytellers. As always, we live in a time of hackwork and great mastery, both at home and abroad. Significant new waves are just now cresting in countries like Iran and Japan, while our own éminence grise, Martin Scorsese, toils to complete (and defend from studio trimming) his most moneyed and ambitious film to date, Gangs of New York. Again, business as usual.

What is at stake is the nature of the conduit: Whether to successfully bring a film to its audience or the audience to a film—that is the question. Anemic systems of distribution, often baldly prohibitive to foreign diversity, should give cause for alarm, as should the dearth of plain-spoken yet passionate advocacy for adventurous work, from media sources that could afford to be more courageous. Both elements are essential to the survival of a vibrant cinema; both require patient cultivation and the sober consideration of all parties vested in seeing that future guaranteed.

Such is the core essence of this special film issue of In These Times, a magazine committed to the critical examination of systemic failures and grassroots solutions. Cinema is a worthy subject for such analysis; the pursuit of culture, an invaluable human right, deserves the same vigorous discussion as matters of statecraft and global abuse. In the pages that follow, we have assembled the opinions of several of our cultural correspondents, reporting on—and in one case, from—the front lines of cinema’s most promising activity, from underrepresented regions on the map to more theoretical battlegrounds of subject and genre. All of these writers share in the dream of cinema’s greater enrichment; all offer different proposals toward that end.

A quiet phenomenon happened in America this year, one that merits both attention and pause. A modest independent picture opened in April to an initial critical response that could safely be described as lukewarm. But that didn’t stop its distributors from knuckling down, carefully growing the film from city to city, listening to word of mouth, tending to interest. In six month’s time, they had done more than break even; they actually had a hit—a big, fat, Greek hit. At $170 million and counting, My Big Fat Greek Wedding is, with the possible exception of The Blair Witch Project (which technically had some studio assistance with its promotion), the most commercially successful independent film of all time.

Which is really saying something, because the movie pretty much bores the pants off people, particularly those young, ticket-buying males so coveted by the studios. The producers simply went around them to a different demographic—parents (and grandparents)—and it worked. The point here is not the blandification of tastes (though Wedding does go down as smoothly and innocuously as mac-and-cheese, not souvlaki as you might imagine), nor is it the obsolescence of film criticism. After all, a certain kind of criticism was employed: an unpretentious vouching of merits from friend to friend, from publicist to small theater booking agent. Such application makes you wonder if they might not have easily been selling cough drops or a foreign film, even one just as potentially boring to teen-age boys.

Which brings me to the other phenomenon of 2002, the unspooling of a movie as artistically accomplished and thematically profound as any in years, maybe in a decade. From the point of view of sheer craft, the film has no equal: It’s composed, thrillingly, of a single uninterrupted shot, winding its way around hundreds of performers and dozens of rooms. It has the eerie pull of a ghost story, narrated by a disembodied voice from the future who may be mourning his own death as well as the demise of his homeland. It practically chokes with beauty, decay and a sense of nostalgia so ultimately moving, it has brought festival audiences to their feet in rapture.

But will Russian Ark ever gross $170 million? Not likely; one must concede the brute appeal of lovers in bloom and flaming plates of cheese. And only wishful thinkers could possibly demand the instantaneous nationwide saturation that so many other movies receive as a matter of course. (One can’t coherently trumpet a film for its subtle complexities and also expect it to cry out its enticements to the casual viewer.) But isn’t it high time the connoisseurs of art cinema took a page out of Wedding’s playbook? Regarding Russian Ark, there are czarist history buffs to mobilize, art history departments to target (it’s shot in the Hermitage). And would it hurt the bowled-over critics to take a step back from their sophisticated references to consider the pivotal role they might be playing if they only pitched a review to intelligent readers with no background in cinema or Russian studies at all?

Movies like Russian Ark will always be a hard sell; so are many of the films to be discussed in the essays that follow. But palpable enthusiasm is the first step, communication of that excitement the second. We already have so many other obstacles to overcome, as sadly demonstrated by the recent inability of Iranian director Abbas Kiarostami to obtain a visa in time to attend the American premiere of his latest film, 10. It’s important to note this was not a denial of his application (as was widely misreported), nor an outright condemnation of Kiarostami’s work. (That comes after the war begins.) It was, at root, a failure to communicate the importance of this humanitarian artist to a body that could have exempted him from strict new screening procedures, but chose not to.

Perhaps no amount of skillful reasoning could have swayed our gatekeepers from their ignorance. But as Kiarostami himself suggested in his dignified statement to the press, the embarrassment is also his, and by extension our own. We must try harder to convince, go further to embrace the cultural visions of the world. Kiarostami’s films will survive the waylaying of a visa, the “death of irony,” even the deaths of thousands. But none will survive the death of hope essential to all cineastes—the hope that pools whenever the theater darkens, and of which we have a duty to convey when the lights come back up.