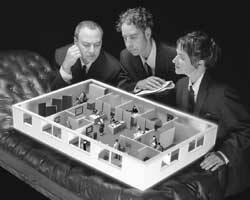 ShareTweetCopy LinkEmailPrint
Published in
October 27, 2003
The typical complaint goes something like this: Why open a huge, gleaming multiplex if three of those screens are going to be devoted to a single “prestige” picture—Seabiscuit, say —and the rest to wannabe contenders of even lesser ambition? Happy exceptions aside, I fully sympathize. New waves of cinema have come and gone, from countries we should be learning more about (at least before we start bombing them), but rarely have we heard those foreign voices on the vast majority of American movie screens. In this regard, film festivals are an oasis—providing an uncommon field of choice apart from the harsh calculations of the marketplace.

The Toronto International Film Festival, a showcase for 254 new features over a 10-day period, is arguably the most significant and rewarding in the world. Unlike the ultra-exclusive Cannes, open only to industry people and the press, Toronto can be attended by the public—and it is, in droves. And while Sundance has become a feeding frenzy for Indie products that are slicker and less spirited by the year, Toronto boasts a global breadth and vitality that shows no sign of sagging.

Documentaries, especially, suffer in a theatrical distribution system that is ever mindful of the bottom line. But it was difficult to underrate the superb slate at Toronto, cohering in a fiercely political and decidedly leftist vein. The Corporation, an audience favorite, is a landmark two-and-a-half hour excoriation of the titular subject. Co-directors Mark Achbar and Jennifer Abbott, whose skills have improved considerably since their well-intentioned but undeniably dull take on Manufacturing Consent, propose a witty thesis (taken from an extensive study by Joel Bakan): If corporations can legally claim the rights and protections of a person—a status successfully extracted from laws intended for freed slaves—then they can be psychoanalyzed as people. Their prognosis, wittily embellished by cheeky corporate training films from the ’50s as well as harrowing footage of oil spills and birth defects, is total pathological psychosis. Building its indictment carefully, with well-chosen interviews from In These Times contributors Naomi Klein, Howard Zinn and others, The Corporation may leave you in a rage.

In the wake of such a definitive blow, other offerings on the subject of globalization seemed breezier, though their potshots were no less welcome. Hilariously, The Yes Men follows a subversive group of well-organized activists posing as guest speakers from the World Trade Organization infiltrating unsuspecting conferences and televised roundtables. Unimaginably, solemn presentations are made by the bogus execs on the merits of re-legalizing slavery in which the audience nods uncertainly. Game Over: Kasparov and the Machine, about the controversy surrounding the chess champion’s infamous loss to IBM’s Deep Blue, suffers for its tidy reduction of the conflict to man-vs.-monolith romanticism; it does, however, work surprisingly well as a paranoid thriller, complete with screeching tires and telephoto lenses peeking out of the slate-gray windows of office buildings.

Political history was well-served by several Toronto docs probing into the recent and distant past, most notably Rithy Panh’s groundbreaking S21: The Khmer Rouge Killing Machine. Through the chillingly blank participation of a handful of prison guards, eerily re-enacting their daily routines in the echoing corridors of one of Cambodia’s most notorious death camps, Pahn arrives at a coolly devastating picture of a regime that claimed more than 2 million lives. “I never saw them as human beings,” says one guard. The Revolution Will Not Be Televised has the delirious payoff of an expertly calibrated action movie—as does its subject, the weekend-long Venezuelan coup that briefly threw the nation into political chaos before the popularly elected Chávez was returned to power. Gifted with uncanny fortune that documentarians can only pray for (the camera crew was trapped inside the presidential palace as it fell under siege), the film packs an enormous amount of information in a riveting 74 minutes, including a sharp analysis of the media manipulation that brought angry citizens to the brink of class warfare. (The instigating Bush White House is not spared.)

Easily the documentary event of the festival was Errol Morris’ mesmerizing portrait of former U.S. Defense Secretary Robert S. McNamara, The Fog of War. (Underlining his film’s parallels to current events in a seething Q&A after the show, Morris sarcastically spat, “We’re doing a great job!”) For all the intelligence and hindsight McNamara brings to the historical record—the film admirably accommodates his phone conversation with Kennedy advocating the swift removal of troops in Vietnam and his own admissions of misreading the threat of Communist China under LBJ—the 87-year-old remains a mystery, unable (or unwilling) to articulate the palpable sense of guilt surrounding him. Morris refuses to push his subject to the answers he wants to hear, taking his cue from the 11 “lessons” McNamara offers as a narrative strand (e.g. “Empathize with your enemy”). Eventually, the lessons recede as mere equivocations, leaving behind the efficiency expert, trapped by hawks and doves alike, still running the numbers on his moment in time.

Speaking of slippery people, Stephen Glass, the fabricating scoop-hound who nearly sank the New Republic’s credibility with a string of phony articles and sources, has inspired a great docudrama, Shattered Glass, a bona fide journo-thriller in the vein of All the President’s Men. What Billy Ray’s confident debut lacks in situational dramatics (how thrilling can the passive-aggressive tantrums of publisher Marty Peretz really be?), it more than makes up for in the central performance of young Hayden Christensen, hiding cagily behind horn-rimmed glasses in boring columns of text. (The office receptionist gets the best line in the movie, a one-word riposte that cuts right to the magazine’s chief deficiency, one that might have prevented the whole scandal: “Pictures.”)

The keen observations of intimately contained dramas landed on surer ground. Case in point: two fine character studies, Sofia Coppola’s hotly anticipated Lost In Translation, and Dallas 362, a frighteningly assured first film by 27-year old Scott Caan (yes, son of James). Both movies boast more than their directors’ ability to trace a lineage to The Godfather: a careful ear for unassuming dialogue and equally expressive silences, career-topping performances by two comic masters (Bill Murray and Jeff Goldblum, respectively), and a choking sense of dislocation. Translation, already in theaters, was met with a sigh of relief, its pretty images of Tokyo and oddball intergenerational friendship coalescing into something unexpectedly moving (validating that Coppola hadn’t merely been lucky with The Virgin Suicides). But Dallas 362 sparked that rarer thrill of prodigious discovery. In many ways the superior film, it ambitiously makes whole a broken home of headstrong Los Angeles transplants, a mother and son from Texas, while reveling in some of the punchiest trash-talk to grace a film in years.

Mystifyingly, Dallas 362 left Toronto without a distributor, making the egalitarian value of such a festival painfully apparent. (If the audience’s rollicking response was any indication, this should soon be corrected.)

Much the same could be said of another pair of movies, both from Danish provocateur Lars von Trier. Dogville, his three-hour slice of anti-Americana and a follow- up to Dancer in the Dark, is all but assured a domestic release. It stars Nicole Kidman (in the role of the dog, for those familiar with von Trier’s arty brand of misogyny), and presents its Depression-era morality play on an arid stage set marked with imaginary walls and shrubs. Dogville’s tongue-clucking point—and von Trier makes it broadly—is the hypocrisy of the Good Samaritan, but a less clinical film could have done so more powerfully.

But von Trier’s antic documentary The Five Obstructions, which still lacks a distributor but is far more deserving, comically reveals the Dogmatist at his torturous worst while tapping into appealing depths of insecurity he’s never allowed himself. What begins as an intellectual’s game—von Trier proposing to his friend and fellow filmmaker, J
Joshua Rothkopf has been cov­er­ing cin­e­ma for In These Times since 1999. His work has appeared in The Vil­lage Voice, The Chica­go Read­er, Isth­mus and City Pages, among oth­er publications.
Have thoughts or reactions to this or any other piece that you'd like to share? Send us a note with the Letter to the Editor form.
More articles by Joshua Rothkopf
Culture
9/11 at the Movies
Culture
Smash and Grab
Culture
Kiss the Girls, Make Them Cry
Similar articles
Culture
Your White Neighbor’s “Black Lives Matter” Yard Sign Is Not Enough
Being anti-racist means making places safe for Black people to inhabit. Without that, BLM yard signs are just performative allyship.
Shayla Lawson
Culture
Want Better Sex? Try Socialism.
In "Why Women Have Better Sex Under Socialism," Kristen R. Ghodsee argues that economic independence for women not only helps all of society—it improves heterosexual relationships too.
Jane Miller
Culture
Barbara Ehrenreich Calls BS on the Immortality Industry
In her new book, Natural Causes, the author reminds us that we can't cheat death -- although we can die trying.
Jane Miller
Subscribe to our free newsletter
Fearless journalism that speaks truth to power
Limited Time: