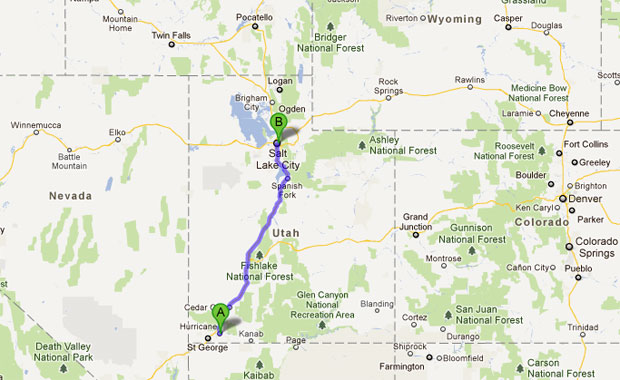 It's a roughly 600-mile roundtrip from Hurricane, Utah, to Salt Lake City—the only place in the state abortions are available. A new 72-hour waiting period for the procedure will likely mean more driving for women who want one.

The state’s new mandatory 72-hour waiting period for an abortion is condescending, costly and just as insidious as other restrictions.

As in the case of South Dakota, the extended waiting period will predominately hurt poor patients, who cannot afford to take three-day or four-day weekends, and rural patients, who will have to travel extensively to get these abortions.

Last week, the Utah state legislature passed a bill that requires any person seeking an abortion to undergo a “waiting period” of 72 hours between getting a consultation from an abortion provider and having the procedure itself. The measure triples the standard 24-hour waiting period. Ironically, it took only 53 seconds for legislators to debate whether or not to force women to spend such a long time making an important decision.

And yet, despite the clear anti-choice motivation for the mandated waiting periods–among other things, they clearly call to mind the waiting periods for firearms; see, abortion equals murder!–they’ve failed to spark the wide-scale outrage or attention given to more visceral forms of patient harassment, such as forced transvaginal ultrasounds.

I was alerted to the Utah bill by several activists, who wanted to make the issue more widely understood. One of them was Jessica Luther, a Texas-based activist and social media consultant for RH Reality Check.

“I do think waiting period laws get less play than ultrasound laws,” Luther wrote me, “because they seem, on the surface, more innocuous. Many people probably imagine that these laws make the situation slightly inconvenient for the patient but fail to recognize how it actually impacts people, especially lower-income rural women. Waiting period laws demand that someone take off extra time from work, double transportation and/or child care costs. If someone is traveling from out of town it may add expense of hotel and food while waiting the mandatory amount of time. In addition, these laws imply that people who seek an abortion have not yet spent time thinking through their decision, which is condescending and untrue.”

And although the Utah bill would result in the longest waiting period in the nation, if put into practice it wouldn’t be unprecedented. Last year, the South Dakota legislature passed a bill extending its waiting period to 72 hours. That bill has been blocked by a court order, which found that the waiting period would violate “undue burden” laws.

And what exactly constitutes an “undue burden”? Kelsey Collier-Wallace, of South Dakota Access for Every Woman, explains:

“The thing that most people don’t understand about the situation in South Dakota (including many of our own legislators) is that it’s already virtually impossible to decide to have an abortion here and obtain one within the next 72 hours,” she said. “Planned Parenthood … flies doctors in from out of state, usually only once a week,” to its only clinic in the state that provides abortions, in Sioux Falls.

Accordingly, she says, “[it’s] not unusual for women from South Dakota to go to Colorado, Montana, Nebraska, Minnesota, North Dakota or Iowa–depending on where they are in the state, those clinics might be closer and easier to access. An actual 72-hour waiting period would probably cause most women to get their abortions out of state… the already limited access in would probably push a lot of women past 14 weeks (which is as late as the Sioux Falls clinic will terminate). So the effect would be a de facto ban in South Dakota.”

Of course, the clear hope is that women will take advantage of that 72-hour waiting period to decide against abortions. In the states that require pre-abortion consultations, the materials and information provided to the patient during the consultation can vary widely. For example, in 10 states, a patient is informed that she cannot be coerced into having an abortion. But in 11 states, she is given information on “the ability of the fetus to feel pain.” In several states, patients are given information on the “psychological” risks of abortion; those only include only negative information. (Those psychological risks, by the way, have recently been debunked).

Utah is one of the states in which a patient does not have the right to refuse written information. In fact, its requirements for abortion consultations are more draconian, across the board, than even South Dakota’s. Its consultations require two trips to the provider. The patient must be given a written description of all common abortion procedures, she must be given a written description of fetal development throughout a pregnancy, she must be verbally informed of a fetus’ abilities to feel pain, she must be verbally informed that she has access to ultrasound services, and she must also be given information on the “psychological” risks of abortion. That information will include only negative or detrimental effects. And now, a 72-hour waiting period has been added.

As in the case of South Dakota, the extended waiting period will predominately hurt poor patients, who cannot afford to take three-day or four-day weekends, and rural patients, who will have to travel extensively to get these abortions. In Utah, an abortion is only available in Salt Lake City. The ACLU is already protesting the extension as an undue burden.

But then, as Luther notes, any waiting period is probably too much. Although waiting periods may seem less sensational or visceral than transvaginal ultrasounds or attacks on birth control, they are just as invasive: They invade people’s right to make decisions, their time, their bank accounts, among other things. People who’ve made up their minds for abortion–or against it–rarely change their minds in less than a week. After all, when it came time to pass the bill, the Utah legislature didn’t even need one full minute.