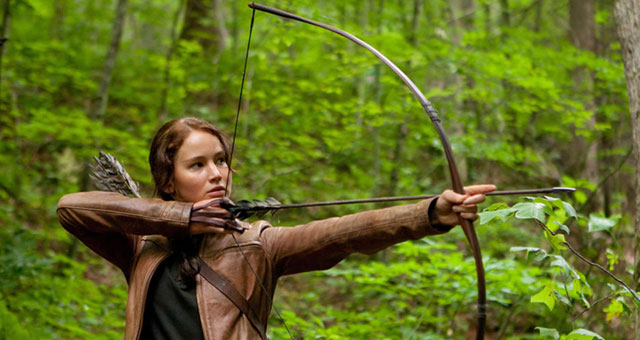 Katniss: Heroine of the Great Recession

The Hunger Games is about overcoming poverty in a starkly unequal world. Sound familiar?

The Hunger Games are essentially the world's worst job interview, and Katniss is the definitive heroine of the Great Recession.

It’s not hard to see metaphors in The Hunger Games. Since its film adaptation was released earlier last month, people who’ve seen it have done little else. The premise of Suzanne Collins’ young adults book series is simple: A televised, state-sponsored fight to the death between 24 randomly selected teens, where survival depends not just on your willingness to bludgeon people to death, but on whether the audience likes your character, and how cute your outfits are. But it’s rich enough that viewers can construct any number of interpretations.

But I’d argue that the reason The Hunger Games is so popular–even, or especially, among adults–is more obvious. Katniss is broke, desperate, and forced to ingratiate herself to strangers and work herself to the point of collapse, in order to eliminate the competition for a position she literally needs in order to survive. The Hunger Games are essentially the world’s worst job interview, and Katniss is the definitive heroine of the Great Recession.

Of course, the series is explicitly about poverty. Collins’ futuristic dystopia, Panem, is divided between a gleaming, Jetsonian paradise called the Capitol, and the outlying Districts, where people work to produce resources for the Capitol, and starve to death in the process. Winning the Games doesn’t just mean survival; it means getting food and shelter, provided by the state, for life. Poverty makes one more likely to play the Games: Families can enter their children’s names in the lottery additional times in exchange for grain and oil. But poverty also makes one less likely to win: Most survivors are wealthy children who’ve been trained in elite academies. Draw your own job-hunt parallels. Here’s some help: The wealthy, destined-to-win children are referred to as “Careers.”

But, in kinder times, this would just be grim sci-fi. Collins lucked out: The first book in the series was published in September 2008, just as the recession hit. Suddenly, the sort of deprivation she’d portrayed was on everyone’s mind. Consider: As a child, Katniss is saved from starvation by the sight of a dandelion in her schoolyard, which reminds her that she can forage for food. And here’s a line from a 2011 piece about long-term unemployment: “My family is eating stir-fried dandelions out of yards to keep from starving.”

Katniss herself is the series’ greatest achievement. She has the grim tunnel vision of someone whose life is defined by lack. She’s unsentimental (in the book’s opening paragraphs, she regrets not drowning the family cat: “the last thing I needed was another mouth to feed”), aloof, and so starkly practical that she’s almost devoid of an aesthetic sense. “I rank music somewhere between hair ribbons and rainbows in terms of usefulness,” she says, at one point. “At least a rainbow gives you a tip about the weather.” She doesn’t entertain useless principles, either. When fellow contestant Peeta frets that gutting tweens on live TV might damage his soul, she responds: “No offense, but who cares, Peeta?”

It’s this sort of thing which prompted io9 to declare that “Katniss is pretty awful.” But her unsparing, bottom-line focus is familiar to anyone who’s survived considerable economic strain. Katniss’s constricted hopes reminded me of the long-term unemployed who said they had given up friends, sex, or leaving the house (“gas costs too much”) in order to get by, or the college-educated “career waiters” in Nona Willis Aronowitz’s “Minimum Rage.”

The film has toned this down. The movie flirts with class politics; Katniss’s home district is shot to recall Dorothea Lange photos from the Great Depression, and some cast members have made glancing reference to “the 99 percent” in interviews. (Which is ironic; despite her hatred of Capitol-ism, Katniss dislikes Panem’s revolutionary movement as much as anything else.) But it softens the blow. Katniss’s contempt for the Capitol citizens is barely mentioned. Instead of wishing she’d drowned the cat, she jokes about it. That brutal “who cares” to Peeta is gone; “I can’t really afford to think like that,” she says instead, then mentions her love for her sister.

But Katniss is a great and relatable character precisely because she’s so cold. Her alarming callousness demonstrates what life without pleasure or security does to people. We don’t love Katniss because she’s conventionally lovable. We love her because she’s a survivor. Few of us could match her toughness. But in a moment when toughness and resourcefulness are called for, we’ve turned to her to show us what we may have to become.