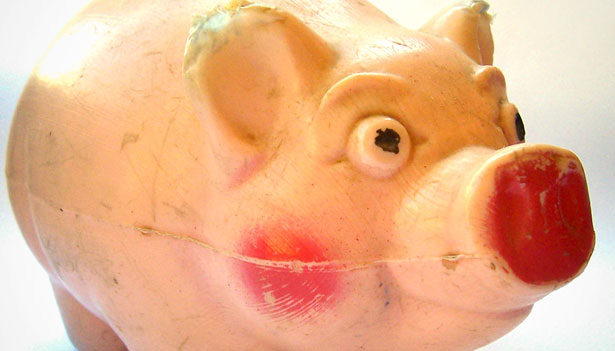 The very public resignation of a Goldman Sachs executive exposes what most already knew: The firm is morally bankrupt.

America has finally learned just what it takes to wound the vanity of Goldman Sachs: attack its vaunted leadership culture.

For a surreal week or so in March, the financial world was abuzz with an anguished op-ed published in the New York Times by Greg Smith, a former Goldman executive director in London. Explaining his resignation from his derivatives desk, Smith catalogued how the firm’s traders casually deride their own clients, calling them “muppets” (i.e., stick-figure proxies fronting for the firm’s high-margin trades) and “elephants” (i.e., big game to be bagged for maximum returns). “It makes me ill how callously people talk about ripping their clients off,” Smith announced. “Leadership used to be about ideas, setting an example and doing the right thing. Today, if you make enough money for the firm (and are not currently an ax murderer) you will be promoted into a position of influence.”

The reaction on Wall Street was swift and devastating. The day after Smith’s cri de coeur appeared, Goldman shares lost 3.4 percent of their value–some $2.2 billion, according to a Bloomberg report on Smith’s “searing essay.”

The loss was all the more remarkable in light of the firm’s recent track record. Even after the SEC exacted the largest-ever settlement in history over Goldman’s unscrupulous Abacus Fund, which short-sold the firm’s own mortgage-backed securities on the downslope of the housing bumble; even after Rolling Stone political scribe Matt Taibbi made the term “vampire squid” synonymous with Goldman’s signature pump-and-dump business model, Goldman continued to book historic profits, leading all other comers in fees from equity offerings and takeovers in 2011.

So why should the plaints of a junior derivatives manager create such shock waves? In part, press reports suggested that it was a matter of bad timing: Smith’s resignation letter appeared just as Goldman and other investment titans were going to see their dominant business and compensation models shift significantly under the implementation of the so-called Volcker rule, which aims to separate investment and commercial banking now done under the same financial roof.

Still, such pre-regulatory jitters weren’t spooking Goldman ahead of Smith’s jeremiad. In February, the firm announced in an investors’ newsletter that “from a financial markets perspective, the environment looks quite friendly. ”

No, one has to surmise that what prompted Goldman’s Wall Street peers at last to repay a measure of the firm’s own contempt was the sheer indelicacy of it all. It’s one thing, after all, to dishonestly shill your investment products to the public at large. As Taibbi has demonstrated, that’s been the Goldman way. But it’s something else entirely to acknowledge that the members of your own client base are the same breed of rubes who typically get stuck with the tab as your bad transactions migrate downstream into the public coffers. It bears reminding, after all, that the main run of Goldman clients aren’t the well-meaning financial innocents that Smith makes them out to be: They are, rather, members of the same cartelized investment class, brandishing portfolios that typically run to 9 figures or more.

One such self-aware Goldman client told The New York Times he was unfazed by Smith’s report that the firm traded against the interests of its own clients: “Come on, that is what they do, and they’re good traders, so I do business with them” he said, sounding for all the world like a less-profane version of Matt Taibbi. (By rights, no one should have known this better than Smith himself, who bragged in his op-ed of representing Middle Eastern derivatives clients – i.e., the corrupt scions of wheezing regional monarchies – to the tune of a trillion dollars or so.)

It turns out, in other words, that “muppets” is a comparatively benign term for such financial actors. The part that stings is the open acknowledgment that your own firm’s trading corps is out to make a killing on its own terminally on-the-make clientele. A more genteel and mannered trading desk makes a point of keeping such reflections to itself. And conversely, to trumpet those notions out in the open is what passes for a sick leadership culture on Wall Street these days.