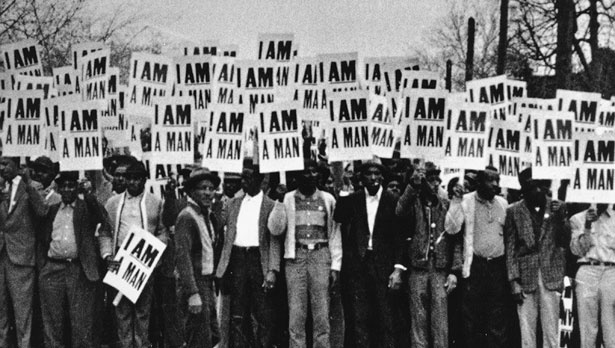 Sanitation workers assemble at the Clayborn Temple in Memphis, Tenn., on March 28, 1968.

A Civil Solution to Labor’s Problems

The key to reviving U.S. workers’ fortunes may be as simple as amending the Civil Rights Act.

The book's title communicates the problem—the surprising reality that individual American workers do not have a protected civil right to organize.

By the summer of 2009, seven months after the election of Barack Obama and what looked like a filibuster-proof Democratic Senate, labor’s campaign to enact the Employee Free Choice Act (EFCA) had run out of juice. Senators who had co-sponsored the legislation only two years earlier were nowhere to be found when conditions finally seemed to be in place for its passage. As the economy plunged, the administration and erstwhile allies – pounded by the stimulus battle and the gathering storm over healthcare reform – bobbed and weaved to avoid putting serious skin into a fight everyone could plainly see was unwinnable.

The three years following EFCA’s demise were just as discouraging for America’s beleaguered unions. It’s time to reframe how we might think about, communicate and devise a strategy for enacting labor law reform. In Why Labor Organizing Should Be a Civil Right: Rebuilding a Middle-Class Democracy by Enhancing Worker Voice (The Century Foundation Press), Richard D. Kahlenberg – the author of the Albert Shanker biography Tough Liberal – and labor and employment discrimination attorney Moshe Z. Marvit do just that.

The injustice EFCA set out to eliminate was the failure of current labor law to protect workers seeking to organize against employer domination and abuse. Workers are routinely subjected to intimidation, threats, captive meetings, interminable administrative delays, coercive one-on-one hectoring by supervisors, demotions, forced transfers and all manner of retaliation including dismissal. Employers, as a matter of standard operating procedure, absorb the law’s miniscule fines for illegal intimidation or retaliation as part of their overhead for quashing organizing drives. Many organizers, as a matter of credibility and conscience, no longer distribute Your Rights Under the Law palm cards to workers, knowing that the penalties for coercive or retaliatory violations under the National Labor Relations Act are virtually unenforceable and serve no deterrent value.

This was why card check – a process that avoids the risks and retaliation of an employer-dominated election campaign by giving workers the right to unionize once a majority have signed union authorization cards – was the solution advanced as EFCA’s centerpiece. But to those unfamiliar with what goes on during a real-life organizing effort, card check appeared to be a solution without a problem. Worse, it was not hard to portray labor’s solution as the triumph of “the union” over the right to a secret ballot.

The virtue of Kahlenberg and Marvit’s thesis is in its intuitive simplicity and practicality. The book’s title communicates the problem – the surprising reality that individual American workers do not have a protected civil right to organize – even as it posits the solution. In terms of politics and message, this approach draws upon the shared cultural values of individualism, freedom of association and collective self-help that bind us as Americans.

While the body of U.S. civil rights law is based on eliminating or redressing discrimination against protected groups, actual remedies are sought and won on the basis of discriminatory actions taken against individuals. The 1% in this country have long understood that the way to effectively strip the collective power of the majority is through the language of individual rights – “right to work” as a euphemism for gutting collective bargaining, “right to a secret ballot” as a subterfuge for denying majority voice.

The authors propose amending the Civil Rights Act to bar discrimination on the basis of exercising the right to unionize, just as employers are currently prohibited from discriminating against employees on the basis of race, gender, religion, marital status, physical ability and – in some jurisdictions – sexual orientation. They write, “The statute would effectively shift the basic right of an employee to join or organize a union from what has long been conceived of as a collective right to an individual right.”

As such, wronged workers would have recourse to remedies unavailable under current labor law. They would have the right to sue in federal court for compensatory and punitive damages. They would have the right to discovery and a jury trial. They would have the right to seek recovery of attorney’s fees and court costs. Kahlenberg and Marvit cite data to show that in 2009 the National Labor Relations Board took an average of 483 days to decide a wrongful termination case, and its average back-pay award was $5,149. Confronted with the prospects of being required to submit to discovery, trial by jury and liability for unpredictable financial judgments, employers would have to consider long and hard the potential risks and costs incurred for each and every individual violation of an employee’s civil rights during an organizing campaign.

Not all employer abuses would be eliminated under a civil rights construct. Bosses would continue to lie and conspire to divide workers. They would game administrative procedures to force delays and cool momentum. But the worst violations – those that stop organizing efforts in their tracks – would at last be punishable by tough and meaningful remedies, and the right to organize would become less theoretical and a lot more real.