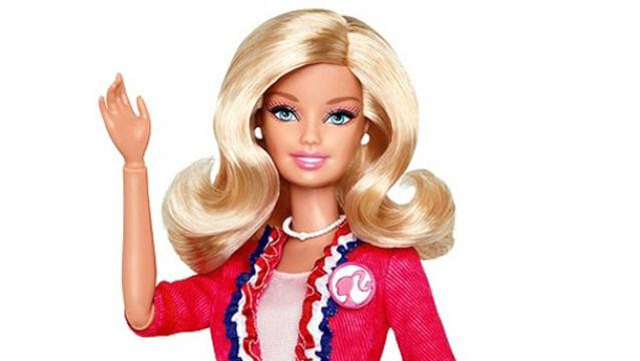 This Barbie is ready to lead the free world. (Image courtesy of Mattel)

Mattel’s vacuous icon is the perfect presidential candidate: she stands for nothing.

Barbie is throwing her "pink hat" into the ring, running a "glam-paign," and doing several other insultingly worded things that mean "running for president."

This year, Mattel is honoring the 2012 presidential race in the most meaningful possible way: by trying to sell you things. Namely, by trying to sell you the “I Can Be… President” Barbie. Barbie is, apparently, throwing her “pink hat” into the ring, running a “glam-paign,” and doing several other insultingly worded things that mean “running for president.” (Mattel seems unaware that actual seven-year-olds are not reading its press releases.)

The doll is supposedly dedicated to inspiring women to run for office, and has earned predictable eye rolls from feminists: “I don’t want [my daughter] to think that only someone who looks like a Barbie doll can be president,” says feminist writer Jessica Valenti. Julie Zeilinger is troubled by the fact that “a doll that embodies an antiquated and problematic idea of femininity is being held up as a model of women’s leadership.”

But here’s the thing: as far as female presidents go, Barbie is about the most realistic candidate we’ve got.

For example: Barbie has no stated class politics. As long as you are making at least $13.99 annually, you are fine by Barbie. (That is what you will need to afford candidate Barbie.) She’s apparently a member of the super rich–those Dream Houses don’t come easy–but, according to Mattel’s website, she also currently works about 17 jobs, from the elite “architect” to the lowly “pancake chef.” (Oh, the kids today, with their fanciful dreams of pancake-making.)

Barbie’s story is an American story. Barbie’s story is a story of pulling on her bootstraps. Barbie’s experience of pulling on her bootstraps is especially inspirational, given her difficulties with footwear in general, and especially boots, as anyone who has owned a Western Barbie can tell you. Do you know how hard it is to even GET those plastic cowboy boots onto Barbie, should you be reckless enough to take them off? It’s very hard!

Furthermore, Barbie has no stated position on reproductive rights. Granted, she could be stereotyped as a selfishly child-free career woman: “A pregnant Barbie would tarnish her ‘perfect’ figure and make her slightly too domestic,” quoth one fan site. “She must remain youthful, almost invincible.” (Strangely, this is exactly what I said to the Planned Parenthood folks the last time I asked for Plan B.) And then, there’s the problem of her friend Happy Family Midge, a pregnant doll who was pulled from Wal-Mart, due to the fact that her “Happy Family” didn’t come packaged with a husband. But they eventually stuck a cardboard cut-out of her husband into the box, and everything seemed to work out fine. (Strangely, this is exactly how Sarah Palin attempted to handle the whole Bristol situation.)

As for Barbie herself, her history would stand up to the strictest conservative standards. She’s never needed an abortion. Or used contraception. Or had illicit sex, or premarital sex, or sex. Barbie, it turns out, has the single most valuable quality a woman in politics can have: A complete lack of genitalia. Also, a literal inability to speak or think for herself.

Will Barbie be caught crying on the campaign trail, or risk coming across as angry? Unlikely! Her smile is literally painted onto her face! How does Barbie feel about the repeal of the equal pay law in Wisconsin? Does she worry about women being discriminated against on the job, or slotted into pink-collar positions? All of Barbie’s collars are pink! They are fabulous! Is Barbie married? Depends on whether you buy the bridal model! Does she support same-sex marriage? You can buy both Barbie and “Theresa” in bridal models, and go to town! Or not!

The “I Can Be… President Barbie” is promoted as the first Barbie ever able to stand on her own. But in fact, she doesn’t stand for anything. In the history of presidential Barbies, which goes back to 1992, Mattel lists their practical achievements as follows: “Barbie’s pink place in the presidential spotlight has helped shape the look of women in politics.” (So that’s where Callista Gingrich came from.) The goals of this iteration are vague: It will, hopefully, “inspire girls to be leaders–be it in their schools, classrooms, or communities.”

What kind of leaders? Mattel doesn’t say. The Palin reference is not incidental: The last time a woman was tapped for a national leadership position based largely on her decorative qualities, it was a disaster, one which may have actually damaged women’s chances of being taken seriously.

Barbie doesn’t stand to do that much damage. But if we want to inspire political leadership among girls, we have to stop throwing them mass-marketable platitudes about undefined “leadership” and “women in politics.” We’d do better to educate them on the politics of being girls.