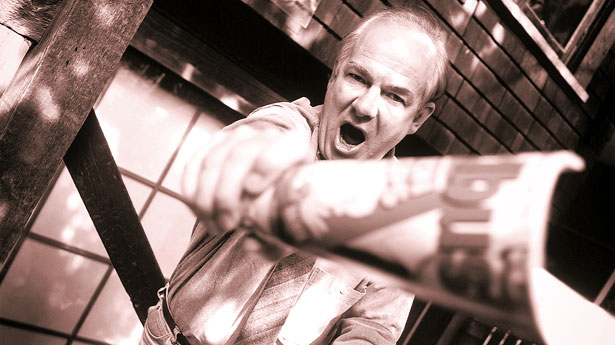 Adbusters’ Kalle Lasn on Occupy and a resurgent Left.

A power struggle is going on in the movement, between the old vertical type of a Left and a new young Left that isn't so enamored with the old wolf pack mentality.

Last July, Adbusters sent out this invitation addressed to those “ready for a Tahrir moment”: “On Sept. 17, flood into lower Manhattan, set up tents, kitchens, peaceful barricades and occupy Wall Street.” And thus, the Vancouver-based nonprofit magazine published by self-described “culture jammers and creatives working to change the way information flows, the way corporations wield power and the way meaning is produced in our society” sparked a movement.

Estonian-born documentary filmmaker Kalle Lasn co-founded Adbusters in 1989. Lasn, 70-years-young (“old,” as in “old Left,” is an adjective he eschews), draws his inspiration from the Situationists, avant-garde European revolutionaries who believed corporate capitalism perverted the human spirit. The Situationists reached their zenith in 1968 Paris and disbanded in 1972, but their efforts to affirm what it means to be free live on in Adbusters.

In These Times spoke with Lasn in March to see what “the man behind the curtain” had to say for himself and the movement he helped ignite.

What challenges does the Occupy movement face?

It is a replay of what happened in 1968 when an insurrection in the Latin Quarter of Paris exploded onto campuses and cities around the world. For a few brief moments it looked like the first global revolution. Occupy is round two of 1968. Young people around the world have this sinking feeling that the next 30, 40 or 50 years of their lives will be one big black hole of ecological and political and financial and personal crisis. And if you are facing that sort of prospect you realize that unless you stand up and fight for a different kind of future, you don’t have a future. Unlike 1968, it is going to have legs.

We on the Left have become an ineffective, whiny, complaining, finger-pointing kind of movement that hasn’t had a new out-of-the-box idea for a couple of generations. Everything we’ve tried, including the Battle of Seattle and all sorts of anti-globalization movements, has fizzled out.

A power struggle is going on in the movement, between the old vertical type of a Left and a new young Left that has social media at its finger tips and isn’t so enamored with the old wolf pack mentality but is ready to do things in a much more horizontal way without leaders – sometimes even without demands. The question is: In this tussle between the old Left and the new Left, who will win? And if temporarily the old Left triumphs then we’re in for a hard year this year and possibly even next, but bit by bit this movement does herald a new Left. This movement has made the Left cool again.

How does one build counter-hegemonic power and get beyond “crowd sourcing,” which is really what the Occupy general assemblies are?

In the next few years there will be what I call a “meme war” – a war of really big ideas within economics. Will we be able to pull off a paradigm shift from neoclassical economics to this new ecological or bionomic or psychonomic discipline that is bubbling underneath the surface? Will we be able to change our current dysfunctional marketplace into one in which the price of every product tells the ecological truth? Will we be able to impose Robin Hood taxes and dismantle this global casino with more than $1 trillion a day flushing around the system in derivatives and credit default swaps and other financial instruments?

If we on the Left try to figure out what these meta memes are and start fighting for them, then we will get somewhere. If we fall back on the old ways of doing things, then capitalism is going to swallow us whole.

Where does power over the distribution of societal resources fit into this equation? How is the Occupy movement going to redistribute wealth from the 1% to the 99%?

Quite frankly, the question you ask betrays the fact that you are quoting the old Left. The way to fix the problem may not actually be a straightforward approach of passing some laws and taking some money from the 1% and giving it to the 99%. Maybe we have to have a more sophisticated approach where we don’t play out this kind of class warfare idea. The change has to be deeper. If we can finally ram through this Robin Hood tax, which a lot of people are for in Europe, and make it very high, not just a .01% but a 1% tax on all financial transactions, then that will be a deep-down transformation of casino capitalism, and all of a sudden the Robin Hood tax would collect trillions of dollars every year and then we the people of the world could start arguing over how to spend that money.

Isn’t the legislative process needed to enact or “ram through” redistributive policies like the Robin Hood tax?

Once you do that, you’re accepting the status quo. Maybe the real job is to launch a third political party in America that is initiated on the Internet, gets million of signatures, and then has a convention. Maybe the task of changing the political landscape of America with a third party is a way smarter move than what the Tea Party did with the Republicans, and what so many people are saying we should do with the Democrats. The trick for the political Left is to think deeper. Instead of thinking, “Hey, let’s pass a law that legislates the Robin Hood tax,” let’s change the political landscape.

Take, for example, the idea we launched last year. In the general assemblies we have a microcosm of a democratic process that’s magical and beautiful. It works and this is a metaphor for how America should work.

Eventually, I agree, we will have to pass laws and do all that stuff you are talking about, but there is a lot of deep-down rabble-rousing that needs to happen before we get to that point.

Rep. Barney Frank (D-Mass.) has said: “Simply being in a public place and voicing your opinion in and of itself doesn’t do anything politically. … I don’t know what the voting behavior of all these people is but I’m a little unhappy when people who don’t vote, who didn’t vote last time, blame me for the consequences of not voting.” Is this an argument for the Occupy movement to enter the electoral system?

It reminds me of an old adage: If you’re a carpenter, you see everything as a nail and a hammer. Barney Frank has done some good things with legislation. But he is blind, as are so many other Americans, including the Tea Partiers and most of the people in Congress and most of the people on the Left, as to how change ultimately happens. Change finds its bed within a culture with big ideas that resonate with people. There has to be a sort of mystery and magic to the whole thing and so far the Occupy movement has been very good at operating on that deeper level. Somewhere along the line we will have to pass laws and we will need Barney Franks. But there are a lot of meta memes that we have to conjure up, and a lot of strategy that we have to perfect, and there are millions more young people that we have to inspire and recruit into our movement before we simplify the whole process into a cut-and-dry passing of a law.

The Occupy movement has been committed to developing actions and strategies through consensus. How do the “tactical briefings” issued by Adbusters fit into that process?

This tussle over what we should do next is something we should all get involved in. When we put out that call [in the January 25 “Tactical Briefing #25”] for 50,000 people to descend on Chicago [on May 1, ahead of the NATO summit], people in Chicago said, “You haven’t been talking to us. How dare you do this. You haven’t been part of our meetings.” I say, “To hell with them.” We want to put out a tactical briefing, and you can take it or leave it.

Adbusters’ mission statement says that you want to change “the way meaning is produced.” What does that mean?

At the moment, meaning is produced by a commercialized mass media that is mixing communications with commercialism and mind-fucking us all and not giving us the information we need to make wise decisions about the future. The political Left has been pretty lousy at creating that kind of deep-down meaning, of having narratives that inspire young people. The future is a meme war and the winners will be the people who know how to create the meaning.