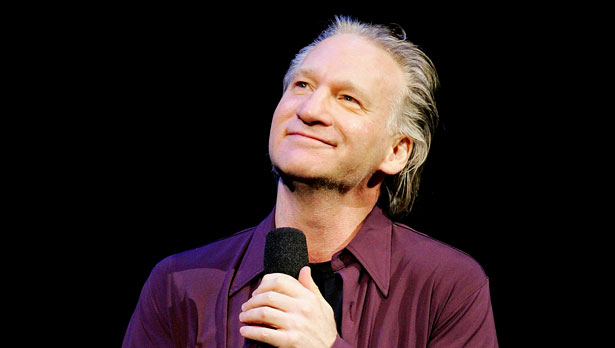 What’s the Matter with Bill Maher?

The HBO comedian’s brand of funny reeks of classist snobbery.

The computer-generated image showed a young white woman wearing a T-shirt with a Confederate flag and the words 'Kiss Me I'm Yer Sister.' Behind her was an old car in a trash-strewn field.

When Newt Gingrich sneered at New York City “elites” who “ride the subway,” Bill Maher took the GOP presidential candidate to task. On the February 10 edition of his HBO show, Real Time, Maher said, “When it comes to dividing America, it’s Republicans who in recent years have carved out [our] nation into two distinct territories: There’s the heartland, and then there’s the rest of the country.”

[California Governor] Jerry Brown doesn’t stand under the Hollywood sign and say, ‘Now I don’t know if this will play in Texas, or down on the farms, where they have no values and fuck chickens. But you here in Hollywood are the real Americans.’ It never happens!

But while elected liberals generally avoid deriding Middle America, prominent unelected liberals have no such compunction. Consider these statements from June 2011, prompted by news that New Jersey Governor Chris Christie had declined to say whether or not he believed in evolution.

Hollywood liberal: “It’s OK if this shit happens in Kansas and Alabama, but don’t fuck with the smart states.”

Those remarks didn’t take place in a cartoon on a Tea Party website. They occurred on Real Time. The Hollywood liberal was Maher himself, while the New York Times stereotype was that newspaper’s media columnist David Carr.

Among coastal liberal elites, ridiculing Middle Americans is a frequent pastime – unfortunately not as frequent as wondering why so many Middle Americans despise liberals. (A question that, if addressed, might go a long way toward answering a second: What’s the matter with Kansas?)

Conservatives seized on these comments and struck a populist pose. At National Review, Denis Boyles wrote, “All that New Yorkers know about Kansas is what they read in the pages of the Times.” Boyles claimed that Carr mocked Kansans because of Republicans’ 2010 electoral success in that state. “The literate Left has a new reason to hate Midwesterners.”

Carr apologized for his “low, sloping foreheads” comment. In a Twitter post, the columnist pointed out that he is a Midwesterner himself (he grew up in the Minneapolis suburb of Hopkins) and added, “I apologize for saying something so, so dumb.”

I asked Carr about his remarks and he explained he was “trying to suggest that Bill Maher, and people like him, saw people from the middle of the country that way,” but that “it came out wrong. I choked,” he said. “I was trying to make the opposite point.” As for the furious response he received, Carr stated, “I deserved whatever I got.”

What’s noteworthy is the disconnect between Carr’s forays into elitist wisecracking and his Middle-America background (as well as most of his writing). That contradiction suggests a culture among the East Coast intelligentsia in which elitist jibes are commonplace, even among those who were not of the Eastern Establishment born.

Bill Maher, for his part, is not contrite. On the March 9 edition of Real Time, he aired video of interviews shot in Mississippi by documentarian Alexandra Pelosi. All the interview subjects were white men who appeared to be working class. Some were very poor. Most were overtly racist, including the man who called President Obama a “half-breed.”

Pelosi said that “the reason why we did Mississippi was because they were voting against their own interests.” But by implying that racism is confined to working-class whites (and apparently just the men), Pelosi put herself at odds with hundreds of years of U.S. history.

On the following episode of Real Time, Maher and Pelosi tried to balance things out by showing a video she shot in New York City that featured interviews with African-American men outside a welfare office. Two of the men indicated that they didn’t want to work, and one said that he had fathered five children with four women.

The message of the two videos: Racism is the fault of poor white men, who nonetheless rightly believe black men are lazy, irresponsible welfare cheats. For posh racists, it was a win-win. Yet Pelosi evidently believes her second video solved the problems of the first. “We’re trying to show both sides,” Pelosi explained.

Maher later dealt with Pelosi’s omission of women from her Mississippi video. He proposed establishing a Southern version of St. Patrick’s Day called “St. Cracker’s Day.” The accompanying shot showed a computer-generated image of a young white woman wearing a T-shirt with a Confederate flag and the words “Kiss Me I’m Yer Sister.” Behind the woman was an old car in a trash-strewn field.

Consider another New York-Hollywood summit meeting: Janeane Garofalo’s April 2009 appearance on Keith Olbermann’s Countdown. With Olbermann sounding notes of agreement, Garofalo analyzed the Tea Party: “This is about hating a black man in the White House. This is racism, straight up. [The Tea Party] is nothing but a bunch of tea-bagging rednecks.”

“Rednecks” started as a slur against white farmers and laborers with sunburns on the backs of their necks from long days working outside. When Garofalo used “redneck” as a synonym for “racist,” she both disparaged country people and let upper- and middle-class racists off the hook. (A 2010 poll by CBS News and The New York Times revealed that the typical Tea Partier has a higher income than the average American and is more likely to be a college graduate.)

Garofalo’s Countdown episode was a gift to the corporate elite and their talking heads. On Fox News, evangelical-for-hire Cal Thomas sounded the keynote: “This is typical of elitism that we’ve seen. [Liberals] really hate the people who built and sustained America.” But not all conservatives were able to stay in populist character. National Review’s Jay Nordlinger offered this rebuttal: “I know, personally, many of the tea-partiers, and there’s not a tea-bagging redneck or racist in the bunch.” Nordlinger wanted to feign outrage on behalf of down-home white folks, but he couldn’t manage. His word choice may have been inept, but it highlighted the fact that many right-wingers have no love for working-class whites.

In November 2000, Matt Labash of The Weekly Standard likened a Florida protest calling for a full recount of the state’s presidential vote to a “dance of the low-sloping foreheads.” He then praised our nation’s founders for being “skeptical as they were of a dimwatt, venal electorate.” And in 2004, John Podhoretz of Commentary magazine blamed the Bush administration’s torture program on “white-trash ghouls” who enlisted in the military.

Right-wing “populism” is the absurdity of the age, but it couldn’t be so powerful without liberal help. In July 2011, Maher expressed disbelief at the extent of the GOP’s support. “I understand why the Republicans get 1 percent of the vote – the richest 1 percent,” Maher stated. “That other 49 percent, someone will have to explain to me.”

Well, Bill, did you hear the one about the two liberals, one from Hollywood and the other from The New York Times?

Chris Pepus is a writer for Razorcake. His work has also appeared in The Progressive, the Chicago Reader, American Theatre and the Progressive Populist.