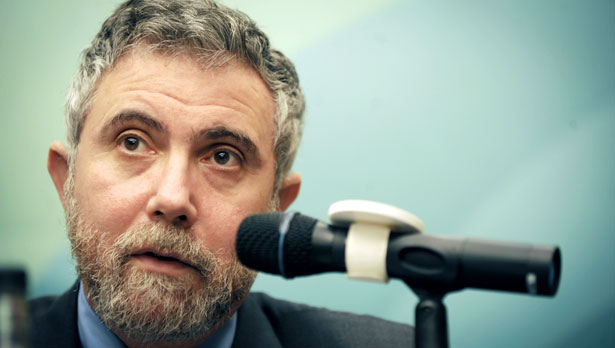 Paul Krugman is tired of trying to reason with some people. (Mike Clarke/AFP/Getty Images)

An interview with Paul Krugman.

Paul Krugman—Princeton economics professor, New York Times columnist and Nobel Prize winner—spent most of his life as a political agnostic. That changed in 2000. With the election of George W. Bush, Krugman became a hero to many as one of the lonely mainstream voices speaking out in real-time against the insanity of invading Iraq. His alienation from Beltway conventional wisdom has only increased since then. As Chris Hayes puts it, Krugman is now an “insurrectionist,” a man who “has come to believe there is something very wrong with the people running the country.”

Krugman's politics have earned him enemies on the Right, of course, but he's also displeased some on the Left with his frank critiques of the Obama administration—in particular, the too-tiny stimulus plan initiated in the wake of the 2008 financial meltdown.

In his new book, the pugnaciously titled End This Depression Now!, he explains that to end the current economic crisis—both in America and Europe—government must increase spending and abandon austerity measures. Krugman spoke to In These Times about the global recession, the U.S. economy and the crisis in Europe.

Austerity seems to be the dominant mantra for both European governments and U.S. Republicans. Yet most of Europe is now in a recession and the U.S. unemployment rate continues to remain stubbornly high. So what do we do now?

Economically speaking, the answer is simple: Increase spending and boost consumption, because the fundamental problem at the root of this crisis is lack of demand. How to do it? Lend money to the local authorities, municipalities in trouble, and states with low liquidity levels so they can re-hire teachers, firemen and public employees, and put people back to work. Hypothetically, if the government were to allocate $300 billion to local entities, this would help generate about 1.3 million new jobs and the unemployment rate would fall to under 7 percent. Yet none of this is happening because at the political level the issue is much more difficult. Republicans stubbornly and ideologically oppose any increase in government spending. They control the House and will not allow a new stimulus package to pass. Just look at the 2009 stimulus bill. The Obama administration's $700 billion package was not nearly enough to get the economy back on its feet. In order to achieve tangible results the bill should have been much larger. The reality was that politically it was impossible because the president was forced to compromise with the Republicans and his advisors suggested that a large stimulus plan would probably backfire in terms of net election votes.

In Europe, Germany seems to be inflexible with its austerity plans. Some talk about the cultural heritage of being a Protestant country, a country where it is morally suspect to be in debt, a country where the word schuld means both “debt” and “guilt,” a country that will not compromise with its “zero inflation” target. Can Berlin and the German Chancellor Angela Merkel go on forever with this economic policy?

Angela Merkel is a stubborn politician, but obviously she is not stupid. She seems to have realized that inflexible austerity measures, including the automatic implementation of the so-called “fiscal compact,” are becoming increasingly unpopular in Europe as well as with the Obama administration, which is worried about a long-lasting European recession. The chancellor also seems to have understood that few other European countries will continue to tacitly agree with Germany.

Take into consideration what happened in Europe in the past months: In France, François Hollande, a socialist who made opposition to austerity a cornerstone of his campaign, is now at the élysée; in Greece, the most popular parties oppose the bailout in its present form; in Spain and Italy the respective prime ministers, Mariano Rajoy and Mario Monti, are starting to speak up against austerity measures. During the last informal meeting of the European Union in Brussels on May 23, Hollande opened up discussions on the Eurobonds again as a way to fund the member countries' deficits, and the issuance of project bonds to fund infrastructure seems to have finally won the tacit endorsement of Berlin. These last events can be considered a first miniscule – I repeat, miniscule – step in the right direction. Obviously it's not enough, and I am not convinced Europe will be able to solve this situation quickly.

Most investment banks have calculated that the probability of Greece leaving the Euro ranges from 20 to 50 percent, yet most Greek politicians—including the anti-bailout, radical Left Syriza party—along with all European leaders have said that they want Greece to remain a Euro country. Is it a bluff? What would happen to Greece if it actually had to leave the Euro?

I don't think it is a bluff. Of course Greek politicians and European politicians want Greece to remain in the Euro. If Athens defaulted and consequently exited the Eurozone it would be a disaster on many levels: political, psychological and obviously economical.

The real issue, despite the leaders' desire for Greece to continue to be in the Euro, is what Athens can actually do. I don't think it can save itself with its own efforts, not even if they really wanted to. If Greece were to exit the Euro, its economy would suffer for a first brief period. Yet after a couple of years, similar to the economic crisis of Argentina [which defaulted in 2001], Greece would rapidly recover and very possibly find growth again. The country's main sectors—tourism and shipping—do not necessarily depend on the Euro to thrive. A return to the drachma [Greece's pre-Euro currency] and the significant devaluation that would follow could help Greek industry gain competitiveness and get back on its feet.

What is the role of the European Central Bank (ECB) and the rest of Europe in the current crisis?

The ECB and its president, Mario Draghi, have done an excellent job at containing the crisis up to now. They found a way to lend money to banks without infringing the Bank's regulations. [ECB rules state the bank cannot lend directly to the member states.] This prevented the collapse of the banking system while allowing Europe to buy some time to find more structural solutions. The question is, what's going to happen now?

It depends on how events unfold and how European countries react if Greece were to go back to the drachma. The markets would undoubtedly try to test the system, selling Spanish and Italian government bonds to see if Germany is really willing to keep the euro alive. If Spanish and Italian borrowing costs should rise above 7 percent, it could be the end of the euro.

Lately the theory of de-growth—the idea that we should reduce our focus on productivity and consumption—has become popular among the Left. The French economist and philosopher Serge Latouche has written, “Present assumptions about economics, development, and the place of human beings in the natural order must be reevaluated. … Nature can no longer be viewed only as a commodity; it must be seen as a partner and model in all human enterprise.” Do you think that these positions are viable?

I believe the definition of growth used by such theorists is too rigid and excludes a lot of possibilities. I don't see how the proposals of economists like Latouche would be a viable solution to today's problems. If, for instance, growth fell to “zero” tomorrow, we would still have problems of climate change, pollution and excessive depletion of the world's resources. The main question is how to achieve growth, because there can be good growth and bad growth. What needs to be debated and talked about is the idea of a sustainable growth, one that focuses on renewable energy and less invasive production systems. You can sympathize with the basic ideas of such theories, but the applicability of them is questionable.

You use the word “depression” in the title of your book. Why?

I am absolutely convinced we are in the midst of a depression. In many respects the situation is similar to that of the 1930s: After 1929, first a recession hit, then a short period of slight economic growth followed, only to end up in another economic slump. If we look at the real unemployment figures today, they show that the long-term unemployed is closer to 4 million, numbers very close to the ones of the Great Depression. I think it's best to call things what they are in order to alert people to what's going on.