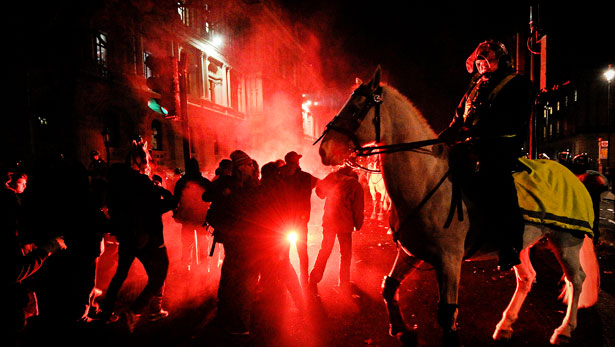 The Scourge of Meritocracy

An elite based on merit could be more impenetrable than one based on nepotism.

“Social mobility” has become a rallying cry in the U.K.—and a useful distraction. Nick Clegg, the Liberal Democrat leader and the coalition government’s deputy prime minister, says it’s the government’s “central social preoccupation.” They have even imported someone from Tony Blair’s government to make helpful suggestions on the subject. None of them are in favour of radical change or legislation. They just want the professions—law, medicine, banking, and so on—to open their doors more invitingly to people from “disadvantaged backgrounds.” Schools and teachers are blamed, as they always are, for failing to spot and encourage talent, and universities are adjured to accept as students those who have been recipients of “free school meals” (a euphemism for “poor”), provided their grades are up to scratch.

“Meritocracy” is back in fashion. The word was invented by my friend Michael Young in his 1958 book, The Rise of the Meritocracy 1870-2033. Michael died in 2002, so he wasn’t quite turning in his grave when he wrote in a 2001 essay for The Guardian about the egregious misreadings to which his book had been subjected; particularly by Tony Blair and New Labour, for whom “meritocracy” was taken to be an unproblematically desirable social ambition—a use of the term which effectively turned its original meaning on its head.

Michael’s book is a sometimes difficult mixture of history, satire and prophecy. It features a crusty narrator, a sociologist writing in the wake of a rioting Britain in 2033, who offers stern Swiftian warnings against the rule of meritocrats. Lamenting Blair’s enthusiasm for the idea, Michael wrote in The Guardian: “It is good sense to appoint individual people to jobs on their merit. It is the opposite when those who are judged to have merit of a particular kind harden into a new social class without room in it for others.” These meritocrats  “of a particular kind,” Michael thought, were likely to be smug in their belief that they are right—and convinced that  their own social mobility, and its particular impetus and trajectory, is the best (if not the only) form for everyone else, particularly their own children. Such an elite, he predicted, could become more impenetrable for outsiders than a social order based on nepotism. Relying on the largesse of the newly privileged may be riskier even than primogeniture as a mechanism for altering the status quo.

The strength of Michael’s argument lies in his vision of what would happen to a society, politics, the professions, the civil service and, above all, to education, if merit, as measured by grades and exam results, were the grounds and the guiding principle of social mobility. It would not only cream off the academically most successful members of the working class, leaving a rump sub-class with no leaders of their own. It would reduce education to something like a system for sorting sheep from goats, a marketplace for assessment and certification, with no obligation toward, or interest in, educating the whole population—especially those who were not expected to move up in the world. Such a system relies on mass failure and on the deleterious effects for most people of early competition.  As Michael’s narrator brutally announces, “Widespread recognition of merit as the arbiter may condemn to helpless despair the many who have no merit.” In Michael’s 2033 dystopia, socialism has been killed off and trades unions emasculated—while education has become occupied solely with reproducing an elite.

The world Michael predicted is frighteningly familiar. We have a “national curriculum,” which all but private schools must follow and which in its narrowness seems calculated to turn off all but the most doggedly ambitious students.  Local authorities are relieved of their charge of schools, and of their accountability to the communities they serve.

To invoke social mobility in the midst of high youth unemployment—if there are no moves to reduce economic and class inequalities—empties the term of meaning. The scramble now at every level is between people who are equally qualified for the job. And those who can afford to stay out of the job market for a time—either in education, or in work for which they are not paid, as interns—will win out, as they are expected to.