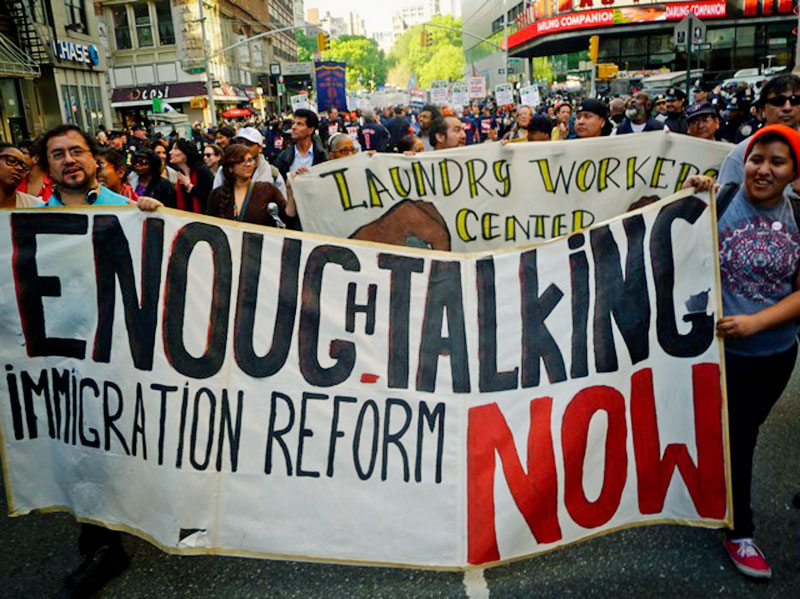 Members of the Immigrant Worker Justice working group march near Union Square on May 1. (Photo courtesy of Osama Khatlan.)

The Death and Life of Occupy

Some groups are redefining ‘occupation’ away from symbolic, utopian visions, toward concrete, local victories grounded in strong personal relationships that endure beyond the 24-hour news cycle.

Occupy Wall Street is dead, at least as far as the chattering classes are concerned. But for Mahoma López, a deli worker at the Hot & Crusty bagel cafe on Manhattan’s Upper East Side, it’s very much alive.

In late May, López and his coworkers won official recognition from the National Labor Relations Board to form a brand-new, independent union, the Hot & Crusty Workers Association. This virtually unprecedented victory in a hard-to-organize sector was accomplished in just a few months, on a shoestring budget. Along with leadership training from the innovative non-profit Laundry Workers’ Center, the campaign received crucial support from the Immigrant Worker Justice working group (IWJ) of Occupy Wall Street. IWJ stepped up pressure on the cafe chain through a series of actions targeting owner Mark Samson’s private equity firm, including showing up with a demand letter at his office and orchestrating a massive picket outside on May Day.

According to López, “Occupy Wall Street has definitely played a very important role in our campaign.”

But what does it mean to refer to Occupy Wall Street (OWS) as an entity nowadays?

New York’s OWS was never a monolith, but for several months it did exist as a distinct local organization, with centralized structures for fundraising and decision-making. In the past few months, OWS has begun to look more like a traditional social movement—a decentralized network of many smaller nodes of activists and sympathizers (some located within outside organizations) working both in collaboration with and parallel to each other. An “Occupy National Gathering” in Philadelphia on July 4 attempted to strengthen these networks, though some attendees reported frustration with the disorganization of the event.

Today in New York City, only two OWS working groups are still executing actions in systematic ways. The Environmental Justice group is mobilizing around the issue of hydrofracking in the state, while IWJ supports local workplace struggles like López’s and is planning direct actions centered on private detention centers and prisons.  In many parts of the country, notably Atlanta and Minneapolis, Occupy activists have turned their attention to the foreclosure crisis and are successfully defending and recuperating the foreclosed homes of working families. Some of these activists are cautiously optimistic that the energy of last fall will return. Others shrug their shoulders at the idea that the OWS label even matters anymore, preferring to focus on concrete next steps in specific campaigns.

The painful, unfinished process of transformation from “the most important thing in the world” (as Naomi Klein put it last October) to this current state of fragmentation and uncertainty has had a lot to do with money and media.

After the eviction from Zuccotti Park in November, the organizational structures that emerged—such as the General Assembly (GA) and Spokes Council (made up of representatives from OWS working groups)—used the consensus process to disburse the hundreds of thousands of dollars in donations accrued during the fall. They spent $30,000 to $50,000 per week from mid-November to early March providing hundreds of now-homeless Occupiers with food, housing (by paying utility costs at church shelters), Metrocards, medical supplies and printing services. But conflicts soon arose over whether and how to ensure that only active working-group members would receive these resources.

Some felt that OWS was transforming from an inspiring political force to a charity or a mini-welfare state. An uncomfortable split emerged wherein college-educated, middle-class OWS participants were more likely to take this view, while people from marginalized groups (such as the long-term homeless) were more likely to assert that OWS had an obligation to continue supporting former park residents.

Eventually the centralized organization of OWS fell apart. As the money ran out in early 2012, the structures that had been in place to dispense it dissolved. While general assemblies continued to meet in New York sporadically through the spring, attendance dwindled and decision-making more often took place at other meetings. At the time of this writing,  the GA no longer meets at all. No centralized body represents the OWS community.

Many stalwart OWS activists welcomed the end of the money as the dawn of a new phase for the movement. Among working groups that still met regularly in the spring, the protocols of direct democracy at meetings became more flexible. Groups began to finance projects in different ways—running crowd-sourced fundraising campaigns or creating worker-owned cooperatives. The OccuCopy collective, which prints posters, flyers and stickers “for Occupy Wall Street and the 99%,” is one such example.

But the donation stream hadn’t run completely dry. In late February, a group of wealthy philanthropists, including the founders of Ben & Jerry’s Ice Cream, created a 501(c)3 organization to disburse more than $300,000 to Occupiers through an online application process. Many within OWS shunned this windfall, while others thought it worth putting to good use.

“It’s interesting to me,” says Diego Ibañez, an IWJ organizer and Finance Committee member, “that a bunch of old rich white guys come and say, ‘Hey here’s a bunch of money,’ and a bunch of young white anarchists say, ‘No, we don’t want your money.’ In that exchange, [the] voices of immigrants, any marginalized people or people of color, were completely left out. So I said, ‘Fuck it. I don’t care if the movement is against this at all.’ ”

With that sentiment, he convinced the IWJ group to apply (successfully) for funds to purchase translation equipment that is now being used to facilitate the participation of Spanish speakers like López in the working group’s meetings.

For the large-scale day of action on May 1, many diverse groups came together to execute dozens of pickets throughout Midtown, a “Free University” in Madison Square Park and a massive solidarity march that filled Broadway with around 30,000 people. Despite internal—and external—criticism of the unworkable calls for a general strike, May Day left many at OWS feeling optimistic.

But May Day’s aftermath also highlighted the difficulty, more than half a year into the movement, of sustaining media attention. While viral images of women being kettled and pepper-sprayed grew the ranks of OWS last fall, an internal debate has sprung up over whether courting the media is still a worthy goal.

“The purpose behind an action should not be to receive media attention,” says Phil Arnone, a Industrial Workers of the World member and co-founder of IWJ. “The mainstream media in the U.S. is run by and for the 1%, so it doesn’t make much sense to rely on them to honestly share our story. The purpose behind actions [is] twofold: to organize our constituents, and to send a message to the power-holders who have decision-making power.”

According to this reasoning, the audience of a broad action like May Day would not be “the general public” but the members of the various participating groups, as well as Mayor Bloomberg and other local power brokers.

In place of headline-grabbing evictions, the alliances between labor, political and community organizations that have traditionally been the lifeblood of the Left have reemerged around Occupy. Groups like IWJ are redefining “occupation” away from symbolic, utopian visions, toward concrete, local victories grounded in strong personal relationships that endure beyond the 24-hour news cycle.

With a longer view comes a wider geographical lens. Far from lamenting the flight of media attention from Zuccotti Park to Montreal or Mexico City or the U.S. presidential race, many in OWS-born groups such as IWJ see themselves as part of a global movement, one that connects longstanding community organizing to the formidable crowds that filled squares and streets around the world in 2011.

For activists like Arnone and Ibañez, organizing is a full-time vocation that may involve the Occupy “brand” but doesn’t depend on it. For workers like López , who is an indefatigable organizer in his own right, Occupy Wall Street has become an unlikely social network that has helped transform his political consciousness. “We’re not the same people we used to be,” he says of himself and his co-workers at Hot & Crusty. “Our eyes aren’t closed anymore.”