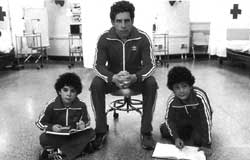 What are you looking at?

High drama, long-winded sagas, maybe even a little violence: Soon many of us will be returning home to family. What’s that you say? Yours deserves a three-hour movie too? I thought so, but until the camera team touches down on the front lawn, we’ll have to make do with other extraordinary clans: twirling von Trapps, blood-and-sauce-spattered Corleones—or at least those tough-loving Sopranos.

The Royal Tenenbaums is about a family of lapsed geniuses no less, three child prodigies uncomfortably reuniting with estranged parents and lovers at their New York townhouse, the rose-wallpapered site of so much former glory. If it sounds bittersweet, it is, but like the best family albums, Tenenbaums is split wide with open-heartedness, and equally generous with its triumphs and failures.

Is there a gentler chronicler of youthful ambition than Wes Anderson? With Rushmore, he gave uncommon voice to the smallest of objects, a boarding-school scrapbook of medals and awards, of kite-flying and elaborate stage plays of Serpico. Anderson tends to turn his frame into a proscenium, onto which march tiny performers and title cards. The effect would come off as precious were it not for a loving sense of preservation, even stronger in Tenenbaums: a closet stocked floor-to-ceiling with well-worn board games, a tiny helmet for a pet hawk that reads “Mordecai.”

Anderson often crams it all into sprinting assemblages that have become his signature—exhilarating “accomplishment sequences” like Max Fisher’s torrent of extracurricular activities in Rushmore. These make even more sense here, cataloging the long-treasured snapshots of a genealogy of over-achievers: Margot (Gwyneth Paltrow), a grant-winning playwright at age 15; Chas (Ben Stiller), a financial whiz-kid of “preternatural” gifts; Richie (Luke Wilson), a precocious tennis pro once known internationally as “The Baumer.”

The kids are all grown up now, retreated into their private neuroses: Chas has lost his wife to a plane crash and monitors his two young sons, Ari and Uzi, with a drill sergeant’s intensity. (The three of them, all clad in primary red Adidas tracksuits for the sake of quick spotting, make for a bizarre nucleus themselves.) Margot languishes in six-hour baths and an inert marriage, while Richie, after choking spectacularly on the court, roams the sea on passenger freighters. Anderson seasons these unresolved tensions with the unexpected return of Royal (Gene Hackman), the pater familias.

A disbarred lawyer freshly evicted from his hotel residence, Royal, who abandoned the family when his children were small, strains under his own life’s shortcomings. One can’t conceive of another actor inhabiting the tricky role—equal parts bluff, bluster and shame—much less nailing it as Hackman does, in the fulfillment of his masterful career. It’s no stretch to imagine how he and his archeologist wife, played by Angelica Huston, could have produced such a whip-smart bunch. Royal’s sensibility can take relief in being called a sonofabitch and not an asshole; he can ponder the consequences of his own betrayal of responsibility while treating his grandsons to a whirlwind adventure of shoplifting, waterballooning strangers and piggybacking on garbage trucks.

Tenenbaums doesn’t explore issues of rejection and class as rigorously as Salinger or even Rushmore did; this time we’re on the inside with the family. (There’s still some room for discomfited guests, notably Danny Glover as a dignified suitor to Huston; Bill Murray, bearded and morose as Margot’s husband; and the superb Owen Wilson as the cowboy-next-door, grown up into a wild, wanna-be Tenenbaum.) But something similar to expulsion, a faintly tragic loss of identity, divides the confident wunderkind Chas selecting ties off his motorized rack from the grown-up version, who demonstrates his toy to unimpressed kids. Precociousness only lasts so long; family is forever. In the beautiful moments when Anderson judiciously reveals maturity to his splintered tribe—like Margot striding in slow-motion, a secret grin on her face, toward her baby brother waiting at the depot while Nico coos “These Days” on the soundtrack—the future looks bright if only for being less dysfunctional.

Anderson’s stalled eccentrics might remind you of Hollywood’s own ambitious phase—of Five Easy Pieces or Harold and Maude—also interrupted prematurely. What followed in its stead, all wizards and maidens and glowing swords, will surely be reworked as long as there are accountants and teen-age boys. This is not to call the first installment of The Lord of the Rings a mercenary undertaking; if anything, it’s been fleshed out with a fair degree of warmth and even a joke about dwarf-tossing.

The visionary responsible (all trilogies, it seems, spring from such stock) is Peter Jackson, a New Zealander who quietly turned out one of the bona-fide masterpieces of the past decade, Heavenly Creatures, a true story about two schoolgirls who committed murder to protect their budding affair. Jackson infused their plotting with elaborate fantasy sequences of unicorns and magic castles, little pink explosions of their private escapes. The Fellowship of the Ring, as you may have heard, is not about schoolgirls, but bringing it off must have required a comparable psychic obsession. And we’re lucky to have on the job a filmmaker acquainted with real human beings.

The gleaming Ring itself is the ultimate source of power in all of fog-shrouded Middle-earth, contested over for centuries by mortals, hobbits, elves, orcs, the Gollum—OK, wake up. Actually, Jackson and his team have achieved something close to miraculous navigating the text’s density, making it clear and compelling with a minimum of pruning. $300 million helps too, but the human grace notes are key: Ian McKellan makes a towering (if slightly self-amused) Gandalf, and Elijah Wood’s Frodo Baggins is an uncertain quester.

Jackson is working from obvious passion; he knows the most special of effects are expected of him but deploys his technology smartly. Certain life-size actors have been shrunk or heightened by trick sets and computers (McKellan’s head hovers dangerously close to the chandeliers of a hobbit’s cozy abode), and only the subtlest tweakings are made to New Zealand’s already ravishing glens. Fellowship leaves you vaguely exhausted but far less than one might have guessed; it’s a tribute to Jackson’s faith that you exit musing not on the money but the spell of Tolkien’s quaint variety of deep thoughts, once so beloved by the counterculture: “To bear a ring of power is to be alone.” (A note of concern to Jackson, the lonely bearer: Before next winter, you may want to rethink that second book’s title, The Two Towers.)

Would it really be Christmas without a remake? The first Ocean’s Eleven was basically an excuse for the Rat Pack to do its well-marinated shtick on camera, and in a place where they could all properly spend a per diem—Vegas. (Did the crew just meet them out there?) The plot, like a maraschino cherry, still feels thrown in at the last minute: a multi-casino heist of hubristic bluster, promising eight-figure payoffs for all 11 hoods. Go ahead and do the math if you like; my considerable pleasure came from savoring the cocktail, which now gets its punch not from aged spirits but the skill of the bartender.

As we live and breathe, Steven Soderbergh is making the best kid-stuff for adults since Howard Hawks put Cary Grant in a sombrero. It’s no small achievement. Too few directors come to the realization that speed can actually relax an ensemble: George Clooney and Brad Pitt riff magnificently on the Frank and Deano roles respectively, and with even better chemistry. As for the 11, though it’s hard to choose, highest adulation must be offered up to Elliot Gould’s gauche financier, whose hairy chest has room for a golden chai, a star of David, and what looks like a miniature Ark of the Covenant.

A piece of nonsense? Fine, if you must insist, but a perfect piece—one with room for a foldable Chinese contortionist, remote-controlled cars and Julia Roberts, not to mention the still-witty stroke of having all those candy-colored streetlights suddenly go black after the Grease Man cuts the power. Or, to translate into High Roller-ese: “Dat is da sexiest thing I ever seen.”