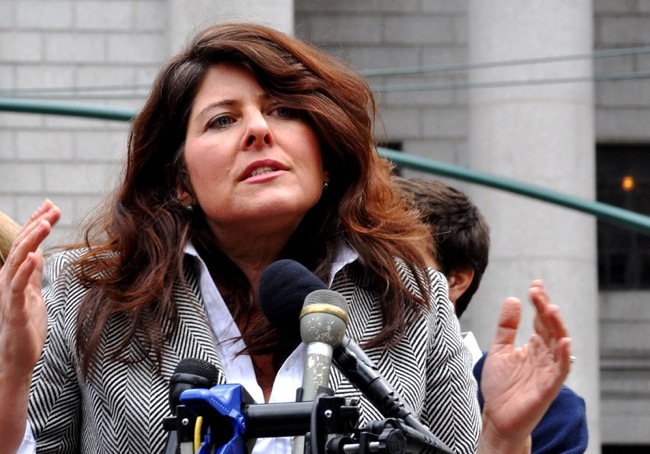 Why the Uproar Over Naomi Wolf’s Vagina?

The book isn't rabidly offensive. Silly, essentialist, willfully ignorant of the existence of trans people: Sure. But for the most part, Wolf believes that sex is nice, being mean to women is bad, and your partner should try to hold your hand and make eye contact.

Naomi Wolf's new book is almost too boring to review. Despite all the coverage, and the mini-controversy it's drummed up, Vagina: A New Biography has few thrills to offer outside of the look you get from a Barnes & Noble employee when you buy the thing. The only real story of Vagina is its role in Wolf's ongoing expulsion from feminism.

But let's cover the book first. Half of Vagina is comprised of sloppily recycled medical information that wouldn't surprise a sixth-grade health class. Wolf, for example, is stunned to learn that nerves–even the pelvic nerve! Where orgasms come from!–are connected to the brain. Speaking of the brain: Wolf is also amazed, at length, by the fact that there are chemicals up there, and that those chemicals can make you have feelings.

Which leads us directly into the other half of Vagina: the daring assertion that getting laid makes you happy. Not that you should ever use such coarse terms around Naomi, who is apparently so linguistically and metaphorically refined that when a friend used the word “cuntini” to describe vulva-shaped pasta (it's a long story) and served her some innuendo-laden salmon fillet, her “heart contracted” to such an extent that she “could not type a word of the book–not even research notes–for six months.” Wolf prefers florid, purple, highly euphemistic accounts of how unlocking the “Jade Gate,” via the “Goddess Array,” can lead to a “sense of deep emotional union, of postcoital creative euphoria, of joy with one's self and with one's lover, of confidence and volubility and the sense that all [is] well in some existential way.”

All of which means: Getting laid makes you happy. And yet it takes about 333 pages, in hardcover, for Wolf to spit that out. To be fair, Wolf also advances the breathtakingly original hypothesis that being happy can sometimes get you laid, as set forth in this experiment on page 34: “If you have a lover or husband who is willing… wait for a moment until he or she has said something really reassuring and admiring of you as a woman; then let him or her touch your nipple.” The nipple, Wolf argues, will be more responsive than it would be if your lover had, say, just uttered the word “cuntini.”

Aside from the general impression that it would be a real chore to engage in dirty talk with Naomi Wolf (she's a big Anais Nin fan; at one point, we're instructed to read Nin while “pay[ing] attention to your vaginal pulse”) nothing's new here. The science is straight from Cosmo; the idea that sex is pleasurable is not exactly groundbreaking.

And yet the book isn't rabidly offensive. Silly, essentialist, willfully ignorant of the existence of trans people: Sure. But for the most part, Wolf believes that sex is nice, being mean to women is bad, and your partner should try to hold your hand and make eye contact. None of that is interesting, but none of it is inflammatory. Which makes it odd that the book itself is getting so much negative attention.

The reason for this is most likely on page 154: “When I sought in 2011 to tease out, in the rape accusations against Julian Assange, what happened after the woman's sexual consent on one level as well as her alleged lack of consent on another, I was attacked by feminists.”

This is entirely wrong. What Wolf did, in reality, was to minimize and wrongly report the allegations, just as she is doing here–in fact, there were two women; one says she struggled while Assange physically pinned her down until she let him penetrate her, and the other, Assange's own lawyers admit, was unconscious at the time of penetration–and to accuse the women in question of calling the “dating police” after some bad sex. Even if Wolf didn't know the real allegations in 2010 (not 2011) when she first said and wrote these things, she was wrong to become an Assange spokesperson while so completely uninformed. And she almost certainly knows the allegations now that they've been more widely circulated, due in part to those “feminists.” So it would appear Wolf is now obfuscating her own obfuscations.

Wolf's response to the Assange allegations was a disgrace, and her attempt to rewrite history only disgraces her further. Yet one wonders whether the rapid and total change in her reputation–many women confessed that, prior to those statements, they'd considered her a role model for writing The Beauty Myth, that they were “heartbroken” by her choices–was fully merited. The feminist response to Vagina has been mostly confined to laughter (which, well, guilty; in my defense, did you read the bit about reassuring your nipples?) and cruel put-downs. People were making fun of the book before it was even released, myself included. Wolf's actions on Assange definitely merited our anger. But Vagina doesn't merit much more than a shrug. It's hard not to think that the one is being transferred to the other.

Feminist history is full of examples, big and small, of women making valuable contributions, then being deemed entirely unworthy after being wrong about a particular issue. This is a logical fallacy called “poisoning the well;” if someone is wrong about one thing or bad in one way, they are therefore wrong about everything and bad in every way. Omar is a thief; I tell you that while he's describing a crime he witnessed, and therefore you doubt Omar. Until he gives a stirring speech about how he and I are part of the same dirty system, because I am describing a memorable scene from The Wire. Or, a more common example: Your marriage ended in a bitter divorce. Therefore your former spouse is a terrible person who is wrong about everything, even the topics on which s/he was charmingly well-informed while you were married. Naomi Wolf attacked two women for filing rape claims; therefore, she is not a real feminist and can't give advice about consensual sex.

To be blunt: This is just not how grown-ups think. And the increasingly Manichean slant of some contemporary feminists, in which one is either a perfect feminist who has never been wrong or a traitor who must be disgraced and expelled from the ranks, risks teaching us all to think less like like grown-ups. No-one is “a liar” or “a bad person.” People lie about some things, and are honest about others; people do bad things sometimes, and at other times they do good ones. This is the principle that allowed some feminists, myself included, to allow that Assange might be guilty, when other progressives were too much in love with WikiLeaks to admit that possibility. It should be the same principle that allows us not to make a punching bag out of Naomi Wolf.

Because if we don't refrain, we'll be faced with an even more hideous future: a month in which the most important news for feminists everywhere is Naomi Wolf's Vagina. And that is just too much for my nipples to take. They're very sensitive, you know. They need to be reassured.