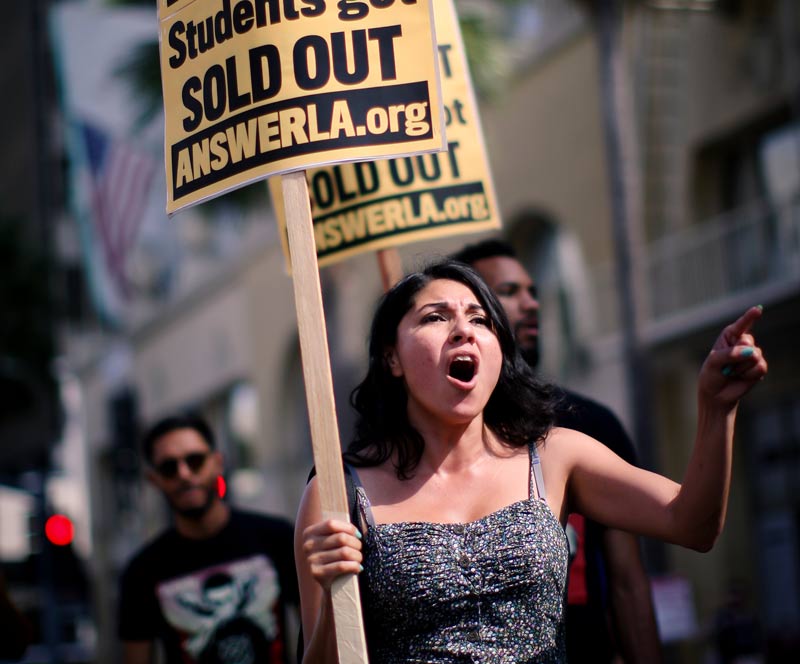 You Are Not A Loan

Is a debt strike the future of Occupy?

The individual quality of debt makes a collective response a big challenge. Unlike the factory, where worker encounter one another daily, debtors accumulate debt—and face the consequences of default—privately.

Though the Occupy camps have disbanded, many organizers believe they’ve found the next big tent under which the year-old movement can regroup: debt. At the one-year anniversary celebration of Occupy Wall Street, members of the group Strike Debt distributed 5,000 free copies of a “Debt Resistors’ Operations Manual.”

Debt, Occupiers argue, is a new way of understanding what sets the 99% apart from the 1%. With wages remain- ing stagnant as the cost of living has increased, workers increasingly finance their day-to-day lives on a deficit. An estimated 75 percent of households now carry some amount of debt. And the problem goes even deeper: Creditors ranging from seedy sub-prime lenders to the International Monetary Fund have the power to compel cities, states and entire nations to forgo basic necessities in order to fulfill their promissory notes.

Could this new offshoot of Occupy reignite the movement? In These Times organized a dialogue about the prospect of a modern-day debtors’ revolt—and how the creditors might fight back. Participating were Pam Brown, an organizer with Strike Debt; Jodi Dean, professor of political science at Hobart and William Smith Colleges; Mike Konczal, a fellow at the Roosevelt Institute; and Peter Rugh, an organizer with the Occupy Wall Street Environmental Solidarity working group.

Most Occupiers have been reluctant to organize the movement around any one overarching issue. What’s the potential benefit of focusing on debt?

Jodi: The issue of debt is typically embedded in the austerity agenda. Debt, whether our nearly unfathomable national debt or debilitating personal debt, supposedly signifies a will too weak to sacrifice present pleasures for future benefits. And in a country so punitive that weakness of any sort invites cruelty and condemnation, debt has given Republicans—and Democrats tripping over themselves in their race to the Right—an opportunity to inflict pain on “the 47 percent” by cutting much-needed benefits and services. So Strike Debt’s move to claim debt as a cause for the Left is a welcome change.

Pete: It would be a mistake to understand Occupy as a single-issue movement focused on debt. For example, OWS Environmental Solidarity is helping coordinate direct actions against fracking and other forms of extraction. But there is a symbiotic relationship between the exploitation of the planet and the exploitation of people, and debt is a useful lens for this. The question we ask by focusing on debt is “Who owes who?” We are all owed a future, but we aren’t going to get one if we accept that Wall Street is entitled to cash in on the investments it’s already made in wrecking the planet.

What are the challenges of organizing people as debtors—rather than as workers, women or others who have been the basis of mass movements?

Jodi: The individual quality of debt makes a collective response a big challenge. Unlike the factory, where worker encounter one another daily, debtors accumulate debt—and face the consequences of default—privately. That others are in the same boat may feel reassuring, but it doesn’t change one’s credit score. And because it’s often hard to figure out who actually owns a loan, it will be hard to organize and target debtors’ actions.

Pam: It’s true that debt is much harder to organize around than the collective grievances of the workplace. But that’s why, as the power of labor declines, figuring out how to build a debt resistance movement is so important.

During the Red Scare, federal support for increased home ownership was considered vital to the project of combating Soviet influence. While nothing longer than a five-year mortgage existed before the Great Depression, homeownership shot up once the government began insuring loans for home building and home buying. The 30-year mortgage was created, and it was an axiom of the time that a homeowner encumbered by years of mortgage debt was less likely to go on strike. So the acceleration of our indebtedness, and its erosion of collective action, was in many ways a response to the power of worker solidarity.

So what could a collective response to debt look like?

Mike: While the language of “striking debt” is important and provocative, there are a number of problems that a strike against paying debts to creditors would encounter.

In a factory strike, workers have leverage because the bosses and owners are losing money and want the factory to resume running. But creditors often want people to miss the first payment so they can charge fees and penalties, and third-party collection agencies get a windfall through defaults on student loans. This raises the question: If a debt strike takes the form of encouraging people to miss payments or default, how can it be effective in an industry that would likely cheer such a move?

There’s also the question of retribution. Your boss can’t work against your renting a house or getting a phone in a different city five years down the road because you went on strike, but your creditor can. So part of the project will be thinking of new ways of imagining a strike.

Pam: On the horizon is a Rolling Jubilee, where we will be purchasing defaulted debt and legally abolishing it. We are also in the process of building an international organization analogous to a union. In the same way factory strikes improved conditions, withdrawing from the debt system opens up space to reclaim our future.

Pete: The fact that Pam is proposing an “organization analogous to a union” without fear that her bicycle will get keyed shows how far Occupy has come from a vehement fear of codifying anything. But this effort may require organization to a greater extent than we’ve seen so far.

Is a campaign against debt in part an argument for a stronger welfare state?

Jodi: Debilitating medical and student debt are the result of a market approach to medicine and education. So if Strike Debt grows, we could see demands for free healthcare and free universities. Once people stop thinking of banks as entitled to interest and fees, then we may also decide as a society that public sector workers, pensions and basic infrastructures are more important than playing the bankers’ game.

Mike: Strike Debt could serve as the basis for a campaign to reestablish education, health, civic infrastructure and income maintenance as part of our basic commons, not to be auctioned off for the benefit of the few.

One challenge is that the government is also increasingly on the other side of these debts, and the same powers that make it a good provider of social insurance make it a vicious debt collector. The government can outwait even the most resistant of student loan debtors. There are more and more stories about senior citizens pushed into poverty or having their Social Security checks garnished to make student loan payments. Strikes work against factories because eventually the capital owners need the factory to start working again, but there’s no indication that this leverage exists with the debts governments stand behind. Factor in how law enforcement is increasingly acting as a front line of debt collection, and this is a poisonous combination.

Occupy has to this point resisted making demands. But could a broad demand for something like debt cancellation advance the movement at this stage?

Pam: Many of us believe that cancellation of some sort is inevitable; the question is who will have their debts canceled and who will not. But I don’t think we’ll see one demand, even as it relates to debt, coming out of Occupy.

Pete: One year into the movement, we need to sustain the bonds that have been forged between Occupiers working on different issues in different parts of the world. How do we do this without demands? We shouldn’t be afraid of raising “mini-demands” under the broad banner of Occupy, whether we are student debt resistors or environ- mental activists fighting nuclear power. Together, we are all demanding a more just and sustainable world.