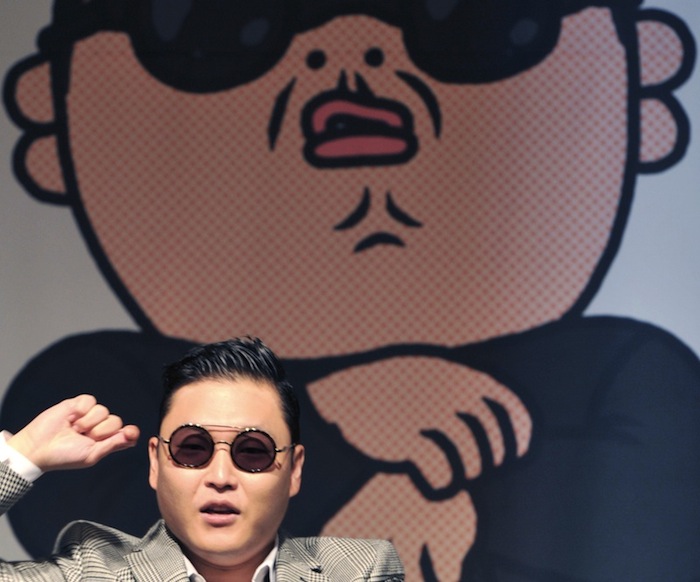 The Genius Behind Gangnam Style

A Korean rapper has gotten 430 million Youtube hits by flipping the script of globalization.

The Oppa Gangnam Style video also arrived at a moment when the East is integrating with the West at full speed, reiterating the idea that globalization is no longer a one-way love affair.

Anthropologists and linguists no doubt are having a field day trying to chronicle and dissect how, in the early autumn of 2012, “Gangnam Style” became an American idiomatic expression. It stands for something along the lines of a brash, flamboyant way of doing things, clownishness, or an act of in-your-face spoofing that is original, catchy and entertaining.

A recently set up Wikipedia page showcases “Gangnam Style” as the most watched Youtube video of the year. It has garnered 430 million hits and counting since July 15, and has spun off countless other videos.

Among the spin-offs: North Korea’s own version to spoof a South Korean presidential candidate, and the “Mitt Romney Style” spoof video.

And the genius behind the dance that mimics riding an invisible horse? Park Jae-sang, aka Psy (short for psycho), a rapper whose career galloped into global superstardom with the distinction of topping the iTunes charts in the United States, United Kingdom, Australia and 29 other countries. Psy’s video is also the most “liked” on Youtube, as well as the most-watched video in Korean entertainment history.

But something beyond Korean history has clearly occurred with the global sanctification of Psy. It’s the history of crossover itself, the phenomenon that has traditionally been treacherous and cruel, with so many talented entertainers from the Far East or elsewhere at the margins of the Commonwealth, falling off the tightrope on the way to global stardom.

To cross over, as far as the world of arts and entertainment is concerned, is to go from the margin to the center, from one set of culture to another, trying to succeed in the latter. But, as a rule, it demands the betrayal of the original, and it requires reinvention–something nearly impossible for those who are entrenched in their own language and cultural sensibilities.

Take the case of Hong Kong actors Chow Yun-fat and Jackie Chan, and the South Korean singer Rain (Bi in Korean). Rain, with his extraordinary dancing skills and his teenage heartthrob status, is known all over Asia as its own Michael Jackson. But Rain met with drought in North America, where he starred in two movies that flopped, and his bid for global stardom quickly failed. Chow Yun-fat, voted by the L.A. Times as “the coolest actor” in the world in the mid-90s, too, failed in Hollywood, in part because that very Hong Kong coolness turned lukewarm in Hollywood movies, and the hard-boiled image that made him famous in the East came off as stilted in the West. Bombed at the box office with his action movies, Chow ended up playing a stereotypical, hideous character in Pirates of the Caribbean: At World’s End. His role was deemed so offensive that it was cut in the version shown in China.

Jackie Chan, the most successful of them all, is worthy of note for his repeated attempts over three decades as an action star in Hollywood. When he finally made it big he was, alas, already steeped in middleage.

Then came Psy, whose crossover moment seems to suggest a major shift in the history of the entertainment world itself. For one thing, it turns the old rules upside down: that crossing over requires giving up the original way of doing things, that the odds are stacked against those who try, and that it takes years of toiling and perseverance, even for the super sexy, cool and talented. Or, at the very least, you have to leave your home country to do so.

Well, not anymore, not if you do it Gangnam Style. The first thing for cultural critics to take note is the speed with which a cultural event can transmit these global days: Psy bursts like a supernova from regional to world stage in a few weeks time, and he didn’t even need to leave Seoul. The second thing to take note of is equally important, if not more so: His video, performed in Korean, is downloaded largely by people who don’t understand one word of the language.

Psy, mindful of this, told NPR recently: “If I have a chance, I want my music lyrics to be Korean… The world's most famous and popular language is music. So if we have some sort of solution, like, with this kind of dancing and this kind of music video so that I can use Korean, if possible, then it's really huge history for my country.”

In other words, since he didn’t try to crossover, but the phenomenon nevertheless crossed him, why not continue to do what he does best? It is the kind of thinking that may very well revolutionize the margin in its relationship to the center.

Let’s look at it another way: All major recording stars from England and North America do not worry about crossovers to the rest of the known world. There’s an undeniable centrality to the West. From The Beatles to Beyoncé to Lady Gaga, Western stars are idolized the world over, their songs memorized, even if their adoring fans don’t understand English. Broadcasting from the center, one has no need for translation. Whatever is good for the West is deemed good enough for the rest of the world.

Such is the shape of the powers and unwritten rule taught subliminally long ago–going from West to East, as well as elsewhere, since the European conquest of the known world 500 years ago has always been a passage of relative ease. It does not demand transformation or self-reinvention from a Westerner. It is catered to.

The reverse, however, has always been a difficult path, an enormous undertaking. An American moving to Vietnam to work and live, for instance, need not speak Vietnamese to thrive; his language is coveted; his status assumed superior. On the other hand, a Vietnamese who hopes to make it big in the United States needs to master the English language at the very least.

The significance of Gangnam Style video is extraordinary in that it refutes that assumption: It assumes a centrality all on its own. It sets its own terms, has its own rhythm, and it dwells in its own particularities.

Yet, its rise to universality is no fluke. Its success occurs when the world is shifting in radical ways, at a time when individuals, empowered by the information technology, can change world history. Witness the video that vilified the Prophet Mohammed co-created by an Egyptian Coptic Christian living in California a month ago that caused massive protests against the United States and undermined U.S. foreign soft policy in the Middle East; or the Tunisian produce seller whose self-immolation a year earlier was captured on cell phones and broadcasted online. It ignited the Arab Spring, leading to regime changes in several countries.

The Oppa Gangnam Style video also arrived at a moment when the East is integrating with the West at full speed, reiterating the idea that globalization is no longer a one-way love affair. It arrived at a time when yoga replaced aerobics, acupuncture and herbal treatment are alternative choices for treating chronic diseases, the world’s children are enthralled by Japanese anime and manga, and kung-fu becomes norm for action films.

That a South Korean video gained global stardom is also no fluke. South Korea, after all, actively supports its artists and totes its pop culture abroad as part of its foreign policy. It takes as much pride in its economic rise as it does in its cultural ascendancy. It even built a Hallyu–Korean Wave–museum at the Incheon Airport to celebrate its global stars and their achievements. It is a country that insists on its own centrality and its own growing contribution to the cultural matrix that defines modern Asia.

Indeed, in Asia there is an old dream of resistance. It was first a dream of 20th century Japan after the defeat of Russia in the Russo-Japanese war. It imagined the continent as one, a continuous land, its people interconnected. That idea was resuscitated by Prime Minister Lee Kuan Yew of Singapore a century later, during the rise of Asian economic powers in the post-Cold War era. While Lee spurred the phrase “Asian Values,” nearby Malaysia's leader, Dr. Mahathir Mohamad, came up with a similar “Look East” Policy.

But those ideas had been more or less top down, militaristic and largely ideological–a regional chauvinistic reaction to its colonial past, and a need to assert its newfound prowess against Western influences. What is happening now, a couple of generations later, however, is much more organic, and solidly on the cultural ground and, hardly anti-West.

Gangnam Style, after all, is a rap song. And its rise occurs at a time when ours has become a world in which traditions exist side-by-side for the borrowing and taking, and ultimately, the mixing. And it would seem that in a world where cultural integration and hybridization are the norm, all forms of art could become both at once intensely global and local.

Indeed, from religion to cuisine, from medicine to music, from dance to literature, from agricultural practices to filmmaking, all are available to the contemporary alchemists to reshape and re-imagine. The playing field is slowly being leveled.

So if America could make a movie called Kung Fu Panda and sell it to the Chinese and have it become a number one hit in China, then it follows that a Korean artist, too, can rise to the top of the music chart in America, riding an invisible horse and rapping in his own language–Gangnam Style, of course.