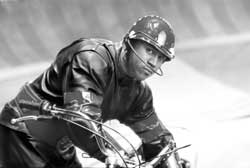 Don't call it a comeback.

BY Joshua Rothkopf
Share TweetReddit0 EmailPrint
Life, for all its mysteries and riches, was somehow found lacking. Here, then, is a remake of Rollerball, MGM having no other choice but to provide and, in so doing, maybe heal. I did not enjoy this motion picture. I was not healed. But somewhere a board meeting must be convening, of jubilant men convinced that an aching need has, by them, been filled. Not for cynical sports futurism (this version winks with right-around-the-corner nowness) or amplified violence—as you may have heard whispered, all gratuities have been digitally erased. At last: a Rollerball for babysitters.

Why should we be caught rubbernecking? Only because Rollerball is, conclusively, the Watergate of studio disasters, a coverup you won’t discover in theaters (hurry, you have but minutes) or on the balance sheet. The smoking gun lies in the 1975 original—pop it in. Do I hear a chuckle at that first line, a sports announcer welcoming us to Houston, “the Energy City”? Here they come now, in their football pads and skates. The team forms a line and removes its helmets. The crowd rises for the Corporate Anthem. There is silence, rectitude.

None of this makes the cut for the remake; you just might get weepy over the passing of ’70s sci-fi earnestness. Rollerball was the ripest: a future world of mighty conglomerates presided over by the executive class which, having done away with wars, nations and poverty, serenely administers a brutal outlet to the under-consumers. (Memo to tomorrow’s CEOs: This does not actually work.) Fully baked or not, Rollerball still commands any self-respecting anti-globalization slumber party. White-walled living quarters and permawaves—par for the genre—take on an aptness; dreams are murmured about wearing a gray suit and making decisions.

John McTiernan and his team of screenwriters have seen fit to chuck out this context, and the error is fatal, like doing Jaws without the shark. The game is now set in rampantly capitalist pockets of the former Soviet Union, with lucrative cable deals the goal of its ex-KGB entrepreneur, Petrovich (Jean Reno, all but twirling his mustache). Hasn’t he heard of the World Wrestling Federation? No matter, we have, and lacking the corporate stranglehold of the original, his “entertainment startup” has all the appeal of a bargain-basement Cirque du Soleil, worth about a second of channel-surfing.

The shift wreaks worse damage on what the Greeks, though not the inventors of rollerball, might have once termed the Central Drama. In the rapidly improving first version, Jonathan, the hero player, threatened the synergistic state with his growing celebrity. (James Caan, dimly unable to grasp the retirement forced on him, must have required director’s notes of the strongest proof.) But this new Jonathan has no discovery other than—wait a minute!—the game is rigged for maximum carnage. While actor Chris Klein cannot fairly be faulted for this, his agent should be flung in the penalty box for making his client’s pitch-perfect doofus in Election seem artless.

So on we go to Plan B, thrills and spills. McTiernan may not have a functioning script, but he can claim to have once made Die Hard, as well-tooled as the scrap heap ever gets. He has plenty to work with here: some pretty flesh, a good eye and the whirling, sadistic contest itself. Can’t these elements occasionally cohere into cinematic rock candy? Bad for you, sure, but irresistible on certain trips to the carnival? Hopes rise early on, when a gaggle of hyperactive TV commercials scurry by; tastebuds are whetted for, say, a sticky gob of Starship Troopers.

But now like a vengeful ghost, the corporate spirit of the original swoops down on McTiernan with a fierceness that seems oddly appropriate. (At least by Hollywood metaphysics.) Poor screen tests and noxious word of mouth led to a rethink on the part of the studio, forcing him to sanitize his picture to a PG-13. Thus McTiernan has the dubious honor of releasing a satire on extreme bloodlust that’s tamer than its 27-year-old inspiration. A collective grimace develops in the cast, responding to horrors rarely seen. Could they be reacting to their own predicament, trapped in hiccuping rhythms like Hot Wheels stuck on a similar figure-eight track?

Rollerball is an unbelievable bomb, but one of the most educational—revealing corporate desperation at its vulgar low. Before that gets interpreted as praise, allow me to reveal what would have been its secret weapon: breasts. The league is now co-ed (hubba hubba), but sneak into their discretely decent locker room and you’ll see there’s good money in computer-generated towels. After the game, it’s a romp over to the local strip club where the boys like to ogle some nice, uh, dresses. Even the cars have bras on.

Women were the plastic “rewards” in the original too; here they’re intended as morsels still in their wrappers. Clearly, today’s teens don’t even rate a dirty treat. And while Petrovich might be the resident baddie, thereby allowing Jonathan to wrest an absurd triumph from the moral muck, the film points its gloved finger outward to the real culprits: us, with our global ratings that spur them on. But if we’re so bad, can’t Rollerball at least let us earn it? This, finally, is the one thing both versions get wrong. Audiences would never be treated so discourteously by any smart company. Rebellion would be instantly packaged and resold to us. This movie is a defect broken in transit.