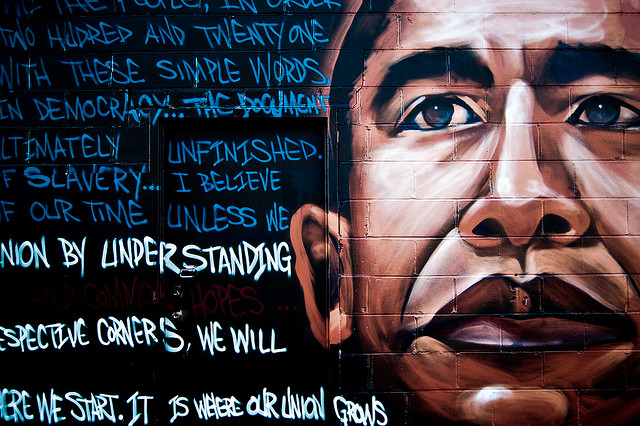 With Obama’s election, and again with his reelection, an internalized threshold for subjugated people was breached.

It was beyond Daniel Defoe's power of imagination to see how much Man Friday, Robinson Crusoe's native servant, could in time radically change Crusoe, and how the world of Crusoe's would be forever altered for having absorbed Friday. But on November 4, 2008, Friday spoke up loud and clear and eloquently, and declared himself an equal.

SAN FRANCISCO—As a refugee from Vietnam, a country colonized by the French and then fought over by the Americans and the Soviet Union, I see the Obama presidency as spelling the end of a 500-year-old colonial curse.

Decades ago, English still unruly on my tongue, I read a spinoff of Daniel Defoe's The Adventures of Robinson Crusoe, but I read it not as most of my American peers did. I saw myself, on one level or another, as Friday, his servant.

A British sailor participating in the slave trade, Crusoe was shipwrecked off the coast of Venezuela. He was alone for some years but managed with his guns to rescue a native prisoner who was about to be eaten by his captors. He named him Man Friday, taught him English and converted him to Christianity. He taught Friday to call him “master.”

James Joyce once noted that Defoe's sailor is the symbol of the imperial conquest, that “he is the true prototype of the British colonist. … The whole Anglo-Saxon spirit is in Crusoe: the manly independence, the unconscious cruelty, the persistence, the slow yet efficient intelligence, the sexual apathy, the calculating taciturnity.”

Likewise, all of those who have been colonized and oppressed in the age of European expansionism are embodied in Friday. Indentured and “saved” by Crusoe, Friday becomes, over the centuries, a political symbol of racial injustice, of victims of colonization and imperialist expansion, of slavery. Friday was African, Native American, Asian, Latin American. And Friday was all the children born from miscegenation.

After all, when he was christened, when he called Crusoe “master,” Friday essentially lost his autonomy and his past. When he was taught a new language, Friday lost his bearings and the articulation and the enchantment of his old tongue.

In the aftermath of the age of European conquest many went in search of identity—cultural, national, personal—but the legacy remained largely that of an inferiority complex, a kind of grievance trap nearly impossible for those previously subordinated by the west to escape.

The power structure is often stacked against them. Having been conquered and divided, in the aftermath, the previously colonized people are often ruled by distrust and disorganization. English is the global language of choice. From western style clothing to commerce to political dominance, history seems largely defined by the west. Species long known to natives are constantly “discovered” and given Latin and Greek names. Ancient settlements which had been inhabited for centuries have been destroyed, the ancient temples razed, and renamed with the names of Spaniard saints. Even the cosmos is crowded with Greek and Roman gods.

For a while, as a Vietnamese refugee to America, I grieved. Then I resigned myself to the idea that I was fated to live at the empire's outer edge, living in a world in which Friday's children were destined to play subservient roles and sidekicks. I knew this because I saw it on TV nightly. Friday became Tonto, Mammy, Pocahontas, Kato, and (play it again) Sam. I saw too, the complexity of my own Vietnamese past ignored or, worse yet, simplified and reduced to faceless figures in black pajamas and conical hats, to serve as props or to be gunned down by American GIs, the wielders of history.

Indeed, Defoe's narrative has become institutionalized and, in many ways, it continues to serve as the core premise of Western culture. Growing up in it as an outsider, the story I internalized was that the supremacy of Crusoe's children was unquestioned. It wasn't a conscious narrative, but it nevertheless became in time a cynicism, and a given—that no matter how well you perform and how smart you are, you are not to be in the center, in the place of real power.

Five hundred years after European conquest began, the glory of Crusoe continues to play out. The Swiss Robinson Family and Robinson Crusoe on Mars and dozens more movies were direct spinoffs, but its mythos also provides the backbone for tv shows like Star Trek, where the captain is white and his crew are ethnic and aliens, and contemporary films like Men in Black, Jerry McGuire, Pulp Fiction, and Lethal Weapon, just to name very few. In them the ethnic sidekicks help make the main character who he is, reinforcing his centrality.

The white man leads, the minority character follows—for such is the shape of the culture and the unwritten rule taught subliminally not so long ago, a fiction that practically everyone believed in as fact.

Who knows then when the story began to shift?

Perhaps the resistant narratives were always there all along, hidden in the blues sung by slaves toiling in the fields, existing in pockets in the various regions and with various peoples waiting to form a chorus, waiting for a right conductor to come along, for the right moment to form a new symphony.

It may very well have begun with Frederick Douglass. Lewis Hyde, in his seminal work, Trickster Makes This World, regards Douglass as a kind of trickster—like Hermes or Loki or Eshu—who learned to reallocate power, a “cunning go-between … thief of reapportionment who quit the periphery and moved to the center.” Born a slave in Maryland in 1818 to white father and black mother, Douglass learned the alphabet from his master's wife. He stole books. He learned how to read and write. He taught others. He became an abolitionist, editor, a suffragist, author, and the first African American nominated vice president in 1872 on the Equal Rights Party ticket with Victoria Woodhull, the first woman to run for President of the United States.

But what did Douglass actually steal? The language of the masters. Eloquence. He mastered it. He spoke up. He thereby crossed the color lines, the demarcations which he was not supposed to cross. He wrote autobiographies—Narrative of the Life of Frederick Douglass, an American Slave; My Bondage and My Freedom; and Life and Times of Frederick Douglass—and, according to Hyde, his stories challenged and broke “the rule of silence and contest the white world' fiction about slavery,” and his articulation in turn liberated him and others.

For this is the way the new power lies: Those who once dwelled at the margins of the Commonwealth have appropriated the language of their colonial masters and used it with great degree of articulation as they inch toward the center, crossing all kinds of demarcations, dispelling the old myth. If Crusoe contends that he still is the lead actor, Friday is far from being content to playing subservient and sidekick any longer.

That old superior-inferior fiction is further supplanted and eroded by the way history flows. Major cities have become highly diverse, and demographer point to the inevitable: by the year of 2050 whites will become a minority, just like the rest.

It was Defoe's conceit in his novel—published in 1719 and considered by many as the first novel written in English—that the “savage” can only be redeemed by assimilation into Crusoe's culture and religion. It was beyond his power of imagination, however, to see how much Friday, in time, could radically change Crusoe, and that the world of Crusoe's is forever altered for having absorbed Friday.

The old curse ends. Some internalized threshold for previously subjugated people is breached. A child of any race in America now has a fighting chance. Those dwelling at the margins can see a path toward the center, crossing all kinds of demarcations. He knows now it's within his powers to articulate and reshape his new world, regardless the color of his skin, and to have the audacity to play central character of the script of his own making.

This essay was excerpted and revised from the author's East Eats West: Writing in Two Hemispheres. It appeared in an earlier form on the site New America Media.