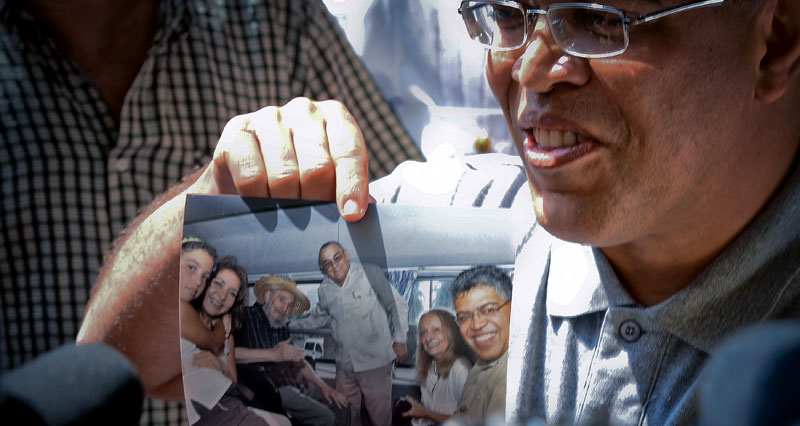 Disputing the October rumors of Fidel Castro's death, former Venezuelan Vice President Elías Jaua holds up a photo of himself with Castro in Havana.

Rumors of Fidel’s failing health are likely overplayed yet again.

But Fidel Castro has been on the verge of death a million times during my lifetime. Each rumor begins with the tiniest spark, then builds into a prairie fire.

Sometime in mid-October, media agencies all over the world began, once more, to anticipate Fidel Castro’s death and rework their standing obits. The provocation this time was a rumor begun by a Venezuelan doctor in Florida named José Marquina, who claimed firsthand knowledge of the situation. According to Marquina, an addled Castro suffered a stroke sometime in September or October and is currently convalescing at a lakeside home near Havana. Supposedly, he doesn’t recognize anyone—not his children, not his wife, not his brother Raúl, Cuba’s current head of state.

Few seemed to take note of the fact that Marquina is the same doctor who assured the world that Hugo Chávez was so sick he wouldn’t make it through the Venezuelan elections. Perhaps Marquina’s claim about Castro is easier to swallow because there is so much other evidence to suggest Castro’s demise: After Chávez’s election victory last month, his Cuban mentor offered no public congratulations, and the comandante’s column for Granma, the Cuban Communist party paper, has not appeared since June.

But Fidel Castro has been on the verge of death a million times during my lifetime. Each rumor begins with the tiniest spark, then builds into a prairie fire. In 2009, the last time this really got going, Diario las Americas, Miami’s most popular newspaper among Cubans in exile, ran the headline, “Fidel Castro in Coma.”

This time, after weeks of speculation from everyone from NBC on down, Cubadebate.cu, a Cuban government-run website dedicated to combating “terror by media,” published a letter purportedly from Castro himself, accompanied by photos taken by his son Alex in which he appears to be walking around a bucolic garden, wearing a straw hat and leaning on a cane. In the note, Castro jabs at those who doubt his vivacity: He claims to be in such great health that he barely remembers what it’s like to have a headache.

Matters have been considerably different after the abdominal hemorrhage that forced him out of power in 2006, though back then his leave from office was set up as temporary. Then as now, there was no actual official word on his health, considered from the first days of revolutionary triumph a state secret.

That retirement was handled in an absolutely genius way. In 2006, the idea that Castro was gone for only a while helped Cubans get used to the idea of a world without him, without formally stripping him of authority. In the meantime, brother Raúl settled onto the throne so that by the time 2008 came and the deed was decreed, it was already a done deal, in fact and in hearts and minds.

Moreover, it played out exactly as Castro had said it would all along: the reins of power passed to Raúl without a power struggle (sure, there was a purge that swept away Vice President Carlos Lage Dávila and Minister of the Exterior Felipe Pérez Roque, but there wasn’t anything anyone could call a struggle: They were fired, plain and simple).

And though Raúl implied there would be changes, there have been few in effect and fewer still that have had resonance in the daily lives of most Cubans or on the world stage. It’s as if he never left. Flesh-and-blood Fidel Castro may be tending his garden, holding his son’s sleeve for balance, but his absence has not yet made a mark on his continued presence in the world.

In any case, since Fidel accurately forecasted his transition from power, it might be best to defer to his take on his own death. In a “Reflection” published in Granma shortly after Barack Obama took office, he waxes optimistically about Obama’s time in office. But still, Castro says, “I receive information and calmly meditate on events. I hope I won’t be enjoying such a privilege in four years, when Obama’s first presidential term is over.”

Perhaps October’s Castro death rumors were inspired, at least in part, by this. But it’s important to do the math: The next presidential term does not begin until Barack Obama retakes the oath of office on January 20. In other words, according to Fidel himself, he’s not going to die anytime before then.