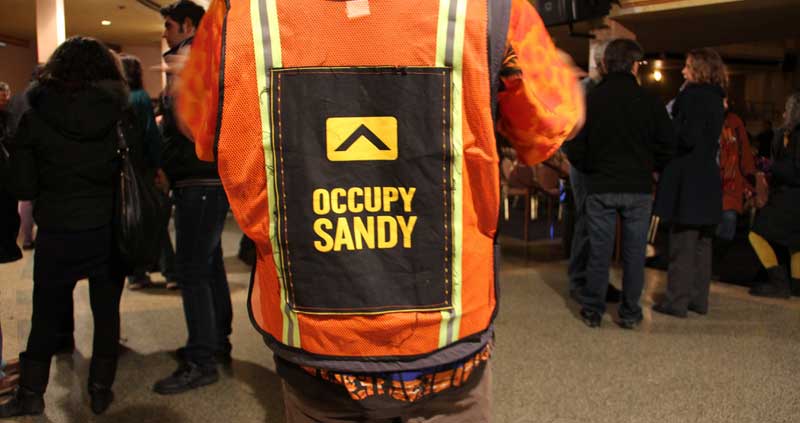 But while Occupy Sandy was formed in response to a crisis, it’s about more than immediate disaster relief. When the blind destruction of Hurricane Sandy gave way to a starkly unequal recovery, it exposed New York’s systemic inequalities.

The morning after Hurricane Sandy  hit the East Coast, leaving in its wake severe damage and more than 100 deaths, members of Occupy Wall Street hit the streets. Volunteers went out into New York City neighborhoods to distribute food and aid.

The impromptu relief organization that resulted, dubbed Occupy Sandy, filled in the gaps left by FEMA, the Red Cross and official city “restoration centers,” none of which had a strong presence in the affected communities, according to reporting by The Nation’s Allison Kilkenny and others.

So Occupy Sandy took the reins, recruiting thousands of volunteers and providing tens of thousands of meals. Its effectiveness was due in large part to the Occupy ethos: rather than a top-down relief effort, volunteers asked communities what they needed and then repurposed existing networks to provide it. Occupy Sandy used churches and other community organizations to get food, water and rebuilding materials to those who needed them as quickly as possible. It also retooled Amazon’s wedding registry system into a wish list for relief supplies, from space heaters to hygiene products—which drew more than $700,000 worth of donations.

But while Occupy Sandy was formed in response to a crisis, it’s about more than immediate disaster relief. When the blind destruction of Hurricane Sandy gave way to a starkly unequal recovery, it exposed New York’s systemic inequalities. The well-off bounced back from the storm quickly, hiring assistance to rebuild, while poorer residents were left to fend for themselves. Occupy Sandy volunteers believe the city doesn’t have to work that way.

The Occupiers plan to convert the networks forged during the disaster into hubs of organizing around broader issues exposed and exacerbated by the storm, such as lack of affordable housing, poverty, homelessness and inequality. Occupy Sandy’s legal team has already begun to educate residents on how to prevent foreclosures and get food stamps, and the group plans to organize residents of Red Hook to pressure the New York City Housing Authority to give public housing residents a two-month rent credit to help recovery. So far, NYCA has offered a rent credit covering only days without essential services.

Occupy Sandy is a model for progressive organizing: a bottom-up effort to staunch the bleeding, followed by  a long-term movement for systemic change to prevent future disasters from cutting as deep.