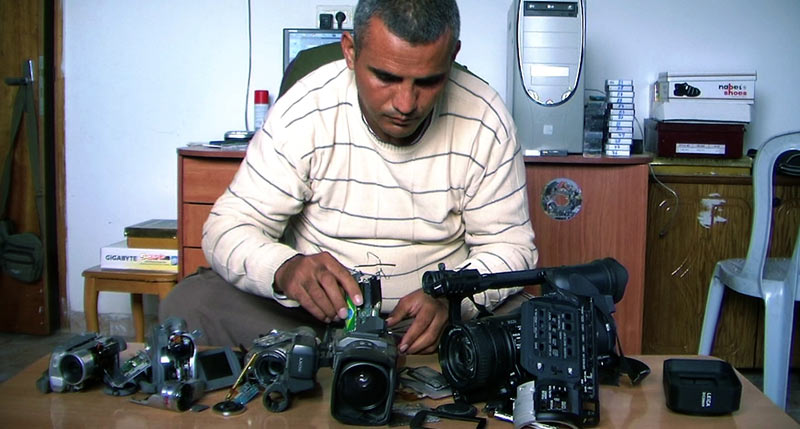 Here you get a rare glimpse of exactly what the interface between a West Bank resident and the Israeli army has been like.

It may be that the Israeli-Palestinian conflict has reached some kind of critical mass of media exposure. Secrets are becoming impossible to keep, as atrocities are recorded on cell phones and in civilian documentaries made with nothing but a cheap camera and a bellyful of ire. Alongside Vibeke Løkkeberg’s 2012 Tears of Gaza, two Oscar-nominated documentaries—The Gatekeepers and 5 Broken Cameras—etch a hair-raising triptych of the dire state of affairs for Arabs in Gaza and the West Bank.

Dror Moreh’s The Gatekeepers  is an earnest attempt at biopsying the soul of Israel in the decades since 1967, by examining the history of the Shin Bet, Israel’s internal security agency responsible for dealing with the Palestinians, the PLO, Hamas and domestic terrorists. Notoriously secretive, the Shin Bet shields the identity of all of its members, save for its directors, six of whom Moreh has assembled here in their retirements, from the deceptively cuddly grandpa Avraham Shalom (1981-86) to the incisive Avi Dichter (2000-05). One by one, the directors recount the history of the organization in a cloud of doubt and rue, freely acknowledging the moral gray areas in which they worked, where prisoners died in custody and house bombings killed innocents. Apparently, the interrogations routinely carried out have been, for decades, Abu Ghraib-worthy.

The history is fascinating enough to overcome the film’s intrusive digital transitions. And clearly, Moreh’s intentions are solid, as when he confronts Shalom about the 1984 “Kav 300” incident, in which two bus hijackers were summarily executed by the Shin Bet, and Shalom resigned after being accused of covering it up (which he still denies). “Forget about morality,” Shalom grumbles. But while Moreh shows us news footage of bloody bus bombings, we see nothing of the Israeli assaults on Palestinians. Since these were actions taken by the Army, not the Shin Bet, they’re not on Moreh’s docket.

He’s bought his subjects’ basic premise, of course—the movie sees the occupation of the Palestinian territories, and the heightened state of military violence it entails, as merely frustrating and untenable for Israelis. It is not a moral crisis, an abuse of power, in and of itself. This is an understandable position coming from these satisfied old soldiers, but Moreh should’ve taken a lesson from, say, Claude Lanzmann, who wouldn’t have let a bunch of old Six Day War desert foxes control his narrative. It’s telling that Moreh claims inspiration from Errol Morris’ The Fog of War, which let U.S. Defense Secretary Robert McNamara off the hook for the genocidal escalations in Southeast Asia.

The other shoe drops with Emad Burnat and Guy Davidi’s 5 Broken Cameras, a personal account by Burnat, who was a Palestinian resident of olive-farming, settlement-encroached Bil’in on the West Bank when he started videotaping his fourth son as a baby in 2005. A separation wall was being built, and Burnat began taping his village’s fearless protests, which are routinely suppressed by Israeli troops with gas grenades and open gunfire. As the title suggests, Burnat goes through five cameras filming on the frontline between Palestinians wielding banners and throwing rocks, and Israeli soldiers who think nothing of shooting children, destroying homes and—as caught on tape—holding down a protester and unloading a rifle round into his leg.

Here you get a rare glimpse of exactly what the interface between a West Bank resident and the Israeli army has been like—that is, a free-for-all, where Palestinians are regarded as little more than scrub growth to be shunted aside for the sake of the relatively wealthy Jews happily moving into their new settlement condos. Honestly, the burning of Bil’in’s olive trees at night, which the settlers routinely do, is bald evidence of malfeasance and injustice that no cant about “security” can mitigate.

In five years of filming, we see Bil’in go from a green, hilly village to a bulldozed construction site, and Burnat finds himself in harm’s way scores of times. (At least three of his cameras are sniper-shot off his shoulder.) 5 Broken Cameras is even-tempered because Burnat is, seemingly. And so the “Holy Shit” feelings of outrage are all ours, ignited by firsthand footage you’ll never see on network TV or described on the New York Times editorial page.