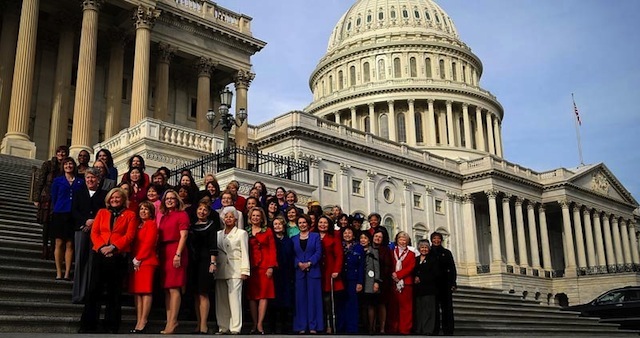 The women of the 113th House Democratic caucus line up at the Capitol.

Fearful of being outflanked by far-right extremists, the GOP is pushing for moderation in its ranks.

Certain Republican factions, however, are doing everything to retain and extend their power—government be damned. They’re already hatching plans to stack the Electoral College, shore up their already ridiculously gerrymandered safe districts and raise more money than the U.S. Mint.

About 200. That’s how many public laws the 112th Congress passed, a record of sorts. Consider that Harry Truman’s “do-nothing” Congress managed to squeak through 906 laws, and the magnitude of the 112th’s resistance and rigidity becomes appallingly apparent.

Moreover, with the economy sluggish and the unemployment rate still hovering around 8 percent at any given time—and at 14 percent for African Americans and 10 percent for Latinos—not one of those laws was a jobs bill.

On the surface, the new 113th Congress looks refreshing. It contains a record 98 women and marks the first time white men are outnumbered in the Democratic caucus. It boasts the first African-American senator from the South since Reconstruction, the first out lesbian senator, the first Asian-born immigrant senator, the first openly bisexual U.S. representative, the first Buddhist in the Senate and the first-ever completely non-Christian delegation (Hawaii’s).

But while Allen West, Joe Walsh, Todd Akin and various other Tea Partiers of note have vamoosed, Michele Bachmann is back, joined by a host of equally ferocious right wing extremists, including two non-white U.S. senators: the aforementioned African American, Tim Scott of South Carolina, and Ted Cruz, the Cuban-American right-winger from Texas.

There’s also the embittered Tea Party caucus—the guys that Speaker John Boehner irritated when he denied them committee posts after they refused to vote the way party leadership wanted them to: Tim Huelskamp (Kan.), Justin Amash (Mich.) and Louie Gohmert, the Texas rep who came out immediately after the Newtown massacre in support of arming principals.

The first law introduced by this distinguished gathering? Penned by Bachmann, yet another—the 34th—repeal of the Affordable Care Act, the GOP’s neurotic obsession.

Both parties know that regardless of appearances, the 113th is a chip off the 112th the most polarized Congress in history—and that the partisanship that’s become a congressional hallmark is unsustainable. Eventually, laws have to pass, budgets have to be approved, judges have to be appointed, or the whole system falls apart.

Certain Republican factions, however, are doing everything to retain and extend their power—government be damned. They’re already hatching plans to stack the Electoral College, shore up their already ridiculously gerrymandered safe districts and raise more money than the U.S. Mint.

And they’ve concluded that their congressional primary process, which leaves many House members vulnerable to far-right challengers, has to be changed.

They’re pretty serious: With the leadership’s blessing, recently retired Rep. Steve LaTourette is taking over Republican Main Street Partnership (RMSP), a group of GOP centrists, and starting a Super PAC to promote moderates. That’s right: moderates. Not because the GOP is trying an overhaul, as might be suggested by all the post-election soul-searching. The idea behind LaTourette’s group is not to expunge the extremists but to keep them in check. Even if the moderates lose, they keep the GOP field from being defined strictly by the Right and the far-Right.

RMSP currently has 48 Congress members, including three U.S. senators: Susan Collins of Maine, Mark Kirk of Illinois and John McCain of Arizona. All are known for at least some bipartisan efforts, and RMSP seeks to highlight those as badges of valor.

“Compromise doesn’t mean surrendering—it means success,” said LaTourette, who made TV appearances after the Plan B failure, the fiscal cliff vote and Boehner’s re-election as Speaker to rip into the party’s extreme right wing.

Those provisions that are working should be retained—wow! Of course they do slip in a little knife cut at Medicaid and Medicare, saying they need “fixing”—but, hey, if not, how could they call themselves Republicans?