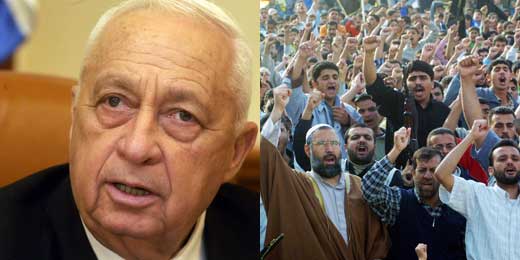 The left must confront anti-Semitism head-on.

On Sunday night, I turned on my television in the hopes of catching a glimpse of this historic protest. I saw something else instead: triumphant Jean-Marie Le Pen celebrating his new found status as the second most popular political leader in France. Ever since, I’ve been wondering whether the new alliance displayed on the streets of Washington can also deal with this latest threat.

The convergence that took place in Washington last weekend was long overdue. Despite easy labels like “anti-globalization,” the trade-related protests of the past three years have all been about self-determination: the right of people everywhere to decide how best to organize their societies and economies, whether that means introducing land reform in Brazil, or producing generic AIDS drugs in India, or resisting an occupying force in Palestine. When hundreds of globalization activists began flocking to Ramallah to act as “human shields” between Israeli tanks and Palestinians, the theory that has been developing on the streets outside trade summits was put into concrete action. Bringing that courageous spirit back to Washington, where so much Middle Eastern policy is made, was the next logical step.

But when I saw Le Pen beaming on TV, arms raised in triumph, some of my enthusiasm drained away. There is no connection whatsoever between French fascism and the “free Palestine” marchers in Washington (indeed the only people Le Pen’s supporters seem to dislike more than Jews are Arabs). And yet I couldn’t help thinking about all the recent events I’ve been to where anti-Muslim violence was rightly condemned, but no mention was made of attacks on Jewish synagogues, cemeteries and community centers. Or about the fact that every time I log onto activist news sites like indymedia.org, which practice “open publishing,” I’m confronted with a string of Jewish conspiracy theories about September 11 and excerpts from The Protocols of the Elders of Zion.

The globalization movement isn’t anti-Semitic, it just hasn’t fully confronted the implications of diving into the Middle East conflict. Most people on the left are simply choosing sides. In the Middle East, where one side is under occupation and the other has the U.S. military behind it, the choice seems clear. But it is possible to criticize Israel while forcefully condemning the rise of anti-Semitism. And it is equally possible to be pro-Palestinian independence without adopting a simplistic “pro-Palestinian/anti-Israel” dichotomy, a mirror image of the good-versus-evil equations so beloved by President George W. Bush.

Why bother with such subtleties while bodies are still being pulled out of the rubble in Jenin? Because anyone interested in fighting Le Pen-style fascism or Sharon-style brutality has to deal with the reality of anti-Semitism head-on. The hatred of Jews is a potent political tool in the hands of both the right in Europe and in Israel. For Le Pen, anti-Semitism is a windfall, helping spike his support from 10 percent to 17 percent in a week.

For Ariel Sharon, it is the fear of anti-Semitism, both real and imagined, that is the weapon. Sharon likes to say that he stands up to terrorists to show he is not afraid. In fact, his policies are driven by fear. His great talent is that he fully understands the depths of Jewish fear of another Holocaust. He knows how to draw parallels between Jewish anxieties about anti-Semitism and American fears of terrorism. And he is an expert at harnessing all of it for his political ends.

The primary, and familiar, fear that Sharon draws on, the one that allows him to claim all aggressive actions as defensive ones, is the fear that Israel’s neighbors want to drive the Jews into the sea. The secondary fear Sharon manipulates is the fear among Jews in the Diaspora that they will eventually be driven to seek safe haven in Israel. This fear leads millions of Jews around the world, many of them sickened by Israeli aggression, to shut up and send their checks, a down payment on future sanctuary.

The equation is simple: The more fearful Jews are, the more powerful Sharon is. Elected on a platform of “peace through security,” Sharon’s administration could barely hide its delight at Le Pen’s ascendancy, immediately calling on French Jews to pack their bags and come to the promised land.

For Sharon, Jewish fear is a guarantee that his power will go unchecked, granting him the impunity needed to do the unthinkable: send troops into the Palestinian Authority’s education ministry to steal and destroy records; bury children alive in their homes; block ambulances from getting to the dying.

Jews outside Israel now find themselves in a tightening vice: The actions of the country that was supposed to ensure their future safety are making them less safe right now. Sharon is deliberately erasing distinctions between the terms “Jew” and “Israeli,” claiming he is fighting not for Israeli territory, but for the survival of the Jewish people. And when anti-Semitism rises at least partly as a result of his actions, it is Sharon who is positioned once again to collect the political dividends.

And it works. Most Jews are so frightened that they are now willing to do anything to defend Israeli policies. So at my neighborhood synagogue, where the humble façade was just badly scarred by a suspicious fire, the sign on the door doesn’t say, “Thanks for nothing, Sharon.” It says, “Support Israel … now more than ever.”

There is a way out. Nothing is going to erase anti-Semitism, but Jews outside and inside Israel might be a little safer if there was a campaign to distinguish between diverse Jewish positions and the actions of the Israeli state. This is where an international movement can play a crucial role. Already, alliances are being made between globalization activists and Israeli “refuseniks,” soldiers who refuse to serve their mandatory duty in the occupied territories. And the most powerful images from Saturday’s protests were rabbis walking alongside Palestinians. But more needs to be done. It’s easy for social justice activists to tell themselves that since Jews already have such powerful defenders in Washington and Jerusalem, anti-Semitism is one battle they don’t need to fight. This is a deadly error. It is precisely because anti-Semitism is used by the likes of Sharon that the fight against it must be reclaimed.

When anti-Semitism is no longer treated as Jewish business, to be taken care of by Israel and the Zionist lobby, Sharon will be robbed of his most effective weapon in the indefensible and increasingly brutal occupation. And as an extra bonus, whenever hatred of Jews diminishes, the likes of Jean-Marie Le Pen shrink right down with it.