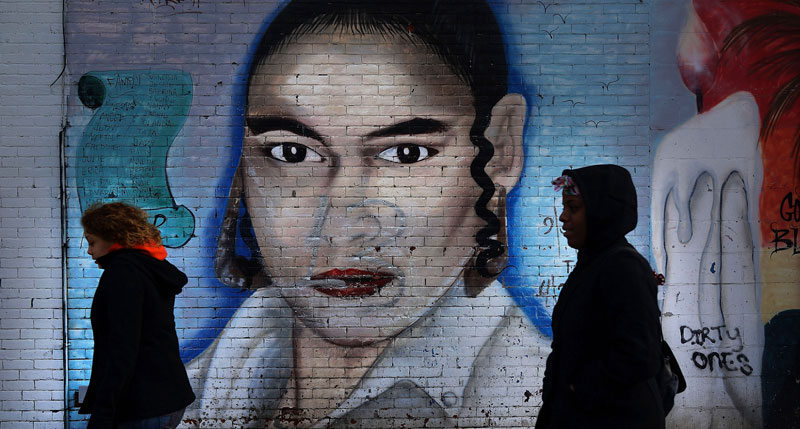 VAWA: A Victory for Women—But Which Women?

Advocates cheer the renewal of Violence Against Women Act after a 500-day delay, but question its approach.

Certain advances of VAWA have benefited some women a great deal. But some of the ways we’ve organized services have left women in more danger than ever.

Bowing to enormous popular pressure, the U.S. House of Representatives voted today to reauthorize the Violence Against Women Act (VAWA), which expired more than 500 days ago. The renewal of the watershed 1994 anti-violence law passed the Senate earlier this month but stalled in the House, where Republicans wanted to strip new provisions designed to protect LGBT, Native American and undocumented victims. After drawing fire from women’s and human rights groups, House Republicans announced Tuesday that they would support the broader, bipartisan bill. It will now be sent to President Obama to sign.

The Republican blockage of VAWA sparked outrage among progressives who believed its passage was a matter of common sense. But many women’s advocates have come to question whether VAWA’s approach—which relies heavily on law enforcement to reduce the incidence of sexual assault and domestic violence—could be having adverse effects. In the two decades since its passage, VAWA has been criticized by anti-violence campaigners who believe it may fuel mass incarceration but fail to address the root problems of gender violence.

In These Times asked three anti-violence activists to discuss the pros and cons of VAWA: Sarah Deer, an assistant professor of law at William Mitchell College and a citizen of the Muscogee Nation of Oklahoma; Lisalyn Jacobs, vice president for government relations at Legal Momentum, which worked to get VAWA reauthorized; and Beth Richie, author of Arrested Justice: Black Women, Violence, and America’s Prison Nation.

After a long battle, the House finally passed VAWA today by a vote of 286 to 138. What’s new in this version of the bill?

Lisalyn: There are three key areas where the new version of the Violence Against Women Act represents a big step forward: It’s explicit about the fact that the VAWA addresses and covers all survivors of violence, regardless of their sexual orientation; it makes improvements in long-standing provisions having to do with immigrant women and their access to services; and it better addresses the needs of survivors of domestic violence in Indian country.

Sarah: Until this new version, VAWA didn’t really attempt to address jurisdictional problems that have contributed to astronomical rates of violence against Native women and children. There’s never really been accountability for non-Indians coming into tribal communities and committing acts of rape or domestic violence; tribal governments can’t prosecute them. I’ve heard tribal police say that the white men on the reservation basically flaunt their violence and taunt the police: “You can’t do anything, I know I’m outside the bounds of the law.” So from my perspective, restoring the power to tribal governments will be an improvement.

Following its passage in 1994, VAWA was reauthorized easily in 2000 and 2005, with bipartisan support. Why was there such a big fight this time?

Lisalyn: In trying to get VAWA passed last year, which was an election year, the advocacy community knew that it was likely that the bill would be politicized. VAWA became the leading edge of a much broader battle: the GOP war on women, as well as a roiling public discussion about comprehensive immigration reform.

Beth: People would say [to me], “How is it possible that we didn’t reauthorize the Violence Against Women Act? That’s just so basic.” But if we peel back the layers of what we’re asking for when we talk about ending violence against women—serious attention to women’s reproductive choices, a fair economy, a decentering of hetero-patriarchy—it makes much more sense that elites would be resistant to it.

So the fact that we had so much trouble passing VAWA this time around is an important lesson to anti-violence activists: We can’t rely solely on the state. Certain groups are more protected by the state than others. And when the state is asked to protect those people who, in other spheres of life, aren’t offered citizenship status, then it finds itself in a contradictory position and ultimately does things like threaten VAWA.

Are there legitimate reasons not to support VAWA? One progressive criticism I've heard is that the bill is overreliant on the criminal justice system.

Beth: Certain advances of VAWA have benefited some women a great deal. But some of the ways we’ve organized services have left women in more danger than ever. Mandatory arrest laws, in particular, have disproportionately impacted women for whom the legal system is not a supportive, or even a fair, system.

Lisalyn: Historically, domestic violence was viewed as a problem confined to the private sphere. So when police would arrive, they wouldn’t arrest anyone, they’d just tell the parties to “cool off.” Partially as a result of VAWA, we saw the development of mandatory arrest laws, where police were trained to make arrests when they encountered a situation of intimate partner violence.

There have been some unintended consequences. Under these policies, when police arrive on the scene of an altercation and cannot discern the primary aggressor, both parties are arrested. Anti-VAWA groups have been hurling criticisms of mandatory arrest. But since its first reauthorization in 2000, VAWA has focused on pro-arrest policies [those encouraging, but not requiring arrest], though mandatory arrest laws may continue in force at the state level.

Beth: VAWA’s passage , lined right up with other crime bills passed in the 1990s. For a host of social problems—mental health issues, substance abuse, truancy—the response that has developed relies heavily on the carceral state.

Since the anti-violence movement was operating in the context of a larger movement towards criminalization, it was easy to adopt the solutions of arrest, detention and surveillance. This has been very problematic in terms of the number of women who experience violence and are subsequently arrested. This approach has also sometimes positioned anti-violence work in opposition to the work of communities of color and queer communities who are trying to reduce the imposition of the carceral state in their lives.

Sarah: And when tribal governments receive VAWA funding, they feel compelled to replicate the state or federal justice system. I’ve seen situations where tribes have been discouraged from reinvigorating a traditional response to violence that would involve the community and the women themselves rather than the tribal court. But the state systems and federal systems have never worked to protect Native women—they’ve always worked to penalize Native women for being Native. When tribes replicate that model, the solutions to violence become very difficult to find.

There are movements for decriminalization of “victimless” crimes like drug offenses and school truancy.. But is this the answer in the case of domestic and sexual abuse?

Beth: In some ways, it’s more difficult to critique the overreliance on the criminal legal system in the case of violence against women. It’s been a tricky issue within the movement. Violence against women is potentially deadly; truancy, one could argue, isn’t.

Sarah: A cautionary point is that it’s possible to over-romanticize alternative methods of conflict resolution, including tribal methods. The peacemaking model or the circle model sounds like a very healing approach, but that can be manipulated by an abuser just like other systems. As tribal governments continue to search for contemporary solutions to the problem of domestic violence and sexual assault, we have to be cautious that we won’t revictimize women by saying, “You must now sit in a circle with your abuser or rapist, because that's the Indian way.” Justice doesn’t necessarily mean incarceration or arrest, but there needs to be some sense of the community supporting that victim. It’s about finding a balance between accountability and healing.

How, then, can we ensure that VAWA doesn’t contribute to criminalization?

Lisalyn: [We need to be vigilant when] VAWA is used as a vehicle of convenience for other legislative items, including those that visit further criminalization on communities. When the bill was moving through the Senate last year, a series of proposals concerning mandatory minimum sentencing and aggravated felonies got attached. But those proposals did not end up in the final version, because the VAWA community opposed them and did quite a lot of work to get them removed, and Senator Leahy and his staff were responsive to our concerns.

Beth: I think we still need greater support for, and engagement with, community-based responses. I’m not talking exactly about decriminalization, but more support for restorative justice, and a reinvestment in community-building strategies. When the approach we embrace is to arrest and remove perpetrators, and shelter women in isolation from the networks that they live within, that suggests to me that what we’ve walled off the problem instead of engaging with it seriously at the community level.

Beyond the framework of VAWA, how can anti-violence activists build a stronger and more inclusive movement?

Sarah: A major concern I’ve had is the development of the field instead of the movement. The field has become highly professionalized. I’ve seen tribes that won’t hire their own Native women to do this work because they don’t have a degree. It’s crucial to remain a movement.

Lisalyn: Those us who are doing the Washington piece of the work seldom get the luxury of being reflective or proactive. But there are many other models beyond the criminalization model or the incarceration model. Concepts of restorative justice are not entirely foreign to people who do my type of work, but they’re not our bread-and-butter either. So I think VAWA advocates will need to think about more holistic ways to do this work, as well as strengthening the engagement with ally organizations that happens frenetically every five years during re-authorization, but should be happening more organically.

Beth: That we would want to end violence against women is easy to take as a given these days. But we really need to insist that ending violence against all women is radical work. It requires more than a set of clauses for some women who survive a certain type of violence; it requires a profound reordering of society. Instead of trying to act like it doesn’t in order to pass a bill, we should lay claim to the transformative potential of what this work could be if we reengaged in it as activists.