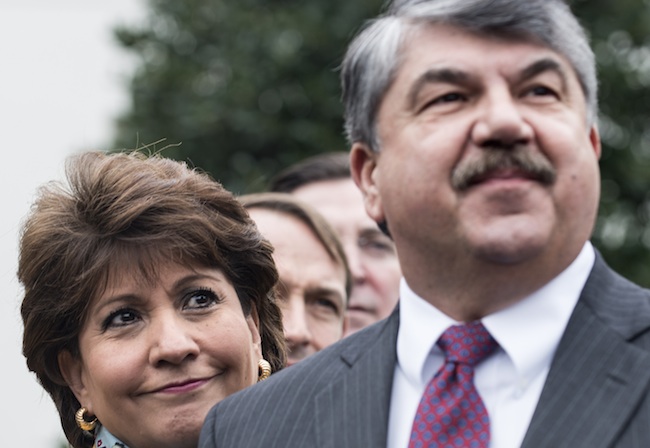 The AFL-CIO has a plan to save the movement.

The mood at the meeting, one AFL-CIO top staffer said, was that the future of the labor movement was at risk if they continued “business as usual.”

As I waited outside the AFL-CIO’s closed-door executive council meeting on Tuesday at a hotel near Disney World, I recalled a conversation at another AFL-CIO meeting some 35 years ago. The Democratic Socialist leader of the machinists union, William “Wimpy” Winpisinger, had called for retirement of the AFL-CIO's aging, conservative president, George Meany, saying that labor was in crisis and needed to head in a new direction. I approached the teachers union president, Albert Shanker, known as a feisty Cold War liberal, to get his reaction. Wimpy was too impatient, Shanker said. The labor movement was like a battleship. It takes time to turn it around.

Who knew how long?

That old battleship has taken many direct shells since then from a flotilla of corporate warships, and it has lost about half its crew. It began noticeably turning in a different direction in 1995 when John Sweeney became president, but the AFL-CIO’ s innovation slowed in Sweeney’s latter years, and disagreements about its direction grew into a schism in 2005. Richard Trumka, Sweeney’s fellow officer and successor, has largely followed the established course, with refinements, in his first four-year term. But the captains of the union ship still are trying to figure out which turns, if any, will win this battle. The mood at the meeting, one AFL-CIO top staffer said, was that the future of the labor movement was at risk if they continued “business as usual.”

The strategies proposed at the meeting involve re-evaluating and re-framing labor’s mission. Trumka and other leaders hope to both draw strength from, and add heft to, the progressive movement. While not entirely novel, the plans would move labor more out of its traditional insularity and into greater solidarity—the original soul of organized labor—not only within labor but also with other  progressive groups.

Both Trumka and Communications Workers (CWA) President Larry Cohen, who heads the federation’s organizing committee, said on Tuesday that the goal was not just gaining new members or better contracts, important as they may be. Rather, Cohen said, labor would try to “connect the dots” among causes—such as immigrant rights, worker rights, campaign and voting reform—to build a mass movement for a strong democracy at work and in the public arena.

Both Trumka and Cohen emphasized that the AFL-CIO must reflect the labor movement’s changing shape, reaching beyond its core of legally recognized unions to new forms of worker representation, like the 3.1 million-member Working America, workers’ centers (up from a handful to more than 200 in a few years), the OUR Walmart movement and non-union alliances of workers such as taxi drivers, domestic workers and food service workers.

As a first step, leaders from global unions and various progressive groups will be involved with AFL-CIO and member union leaders in developing a common agenda both before and during the federation’s quadrennial convention in September.

“It’s about bringing all of our allies together to make them part of the process,” Trumka said. “It’s not about us saying, ‘Here’s what we’ve got to do.’ The unprecedented part is this: in the past we looked internally. How do we change us? Now we’re looking externally as well—rank-and-file people, students, seniors, academics, asking what do we have to do for all of us to win?”

(Although Trumka did not lay out plans to do so, it would make sense to involve members of the unions directly in this discussion, not solely through elected representatives.)

Trumka also wants to change the federation’s internal structures, breaking up the “silos” of separate interests within the labor movement. “The AFL-CIO developed to prevent us from hurting each other, not to help each other,” he notes.

But more conventional union politics still trump some of these grand ambitions. As the executive council discussed its role in uniting with other progressive groups, it passed a resolution on energy pipelines, supporting their general utility and the need for better maintenance. Although the resolution did not mention the Keystone XL pipeline from the Canadian tar sands to the U.S.–opposed by most environmental groups and some unions–the building trades regarded the statement as supporting Keystone.

Emphasizing the need for construction jobs and suggesting that environmentalists are more concerned about mining the tar sands than any pipeline itself, Trumka said the resolution would make it possible to endorse the pipeline once there was a concrete proposal. For several years under Sweeney, a group of unions tried to work out common principles with environmentalists on global warming without success, and the BlueGreen Alliance and other labor-environment initiatives persevere. But the pipeline vote Tuesday suggests that there are—and will continue to be—special interests within labor as well as differences between unions and other progressive constituencies. Trumka’s plans may generate more mutual understanding and more instances of cooperation, but not likely a unified progressive movement.

The continued decline of union members as a share of the workforce—down three-tenths of a point to 11.3 percent last year—undoubtedly contributed to a new seriousness.Much of organized labor’s lost share of the workforce last year reflects heavy layoffs in relatively strong union sectors, especially public and manufacturing workers, that disproportionately hit highly unionized states like Michigan, Ohio, Wisconsin and New York, according to AFL-CIO chief economist William Spriggs. And in most of those states, unions suffered direct political attacks

“We’re cognizant of the state of affairs,” AFL-CIO organizing director Elizabeth Bunn said, “but we’re not demoralized.” While organizing has slowed, Bunn and Cohen said that it certainly has not stopped: CWA has several large campaigns and the United Auto Workers are working with what president Bob King described as a community-led effort for worker rights to a union at a Nissan plant in Canton, Mississippi. And last year, while most unions shrank, four AFL-CIO members—Unite Here, National Nurses Union, AFGE (federal employees) and the International Association of Machinists—added more than 5,000 new workers each.

If labor is to survive, one legislative goal is paramount: removing the huge legal roadblocks to workers exercising their right to organize. Although right-wing Republican control of the House precludes any serious effort at reform of labor laws, the AFL-CIO is working on new version of the Employee Free Choice Act that would go beyond the current focus on union elections. The new proposal would reflect changes in the workplace and economy, Bunn said, such as the increased use of subcontractors and outsourcing. Many employers use these arrangements to evade legal responsibility for workers, making union organizing more difficult.

More immediately, unions are mounting a campaign to pressure Obama to nominate the full complement of five members and one general counsel to the National Labor Relations Board (NLRB), the main labor law enforcement agency. In this, too, Republican roadblocks are likely. At the beginning of 2012, Republicans tried to block all NLRB appointments, which would have essentially stopped enforcement of labor law, as the Supreme Court has ruled that NLRB decisions by less than a three-member majority are invalid. Obama circumvented the blockage with two January 2012 recess appointments, but the those appointments—and thus all subsequent NLRB decisions—were invalidated by a D.C. Circuit Court ruling January that is currently being appealed.

Labor unions expect Democrats to use “all options” to force a Senate vote on the nominations. “We will not sit back and watch” as Republicans try to block appointments and render the NLRB ineffective, Cohen said angrily at the meeting, thumping the table. If Democrats don’t pull out all stops, like Republicans did in 2005 to push through judicial appointments, he says, “We will mobilize against Senate Democrats like we’ve never done before.”

Trumka argues that the labor movement must not separate politics, organizing and other activities but must incorporate “innovation and growth” into every dimension of its work. The AFL-CIO has reformed its old field services staff now into a campaign staff, shifting from a business union servicing model to more of a movement-building social unionism engagement with union members and allies, for example. And Working America is trying to support organizing more as it expands its already well-proven political track record.

At the same time, Cohen argues, labor’s primary focus must be on democratizing America, securing rights for average people at work and in politics, building their power and raising their standards of living. “The story [about the decline of the unionized share of the workforce] is not about the numbers,” he said. “It’s about rights, rights of the 80 million of 125 million workers who are supposed to be supported by the National Labor Relations Board.” The United States has fallen far below other industrial countries in democracy, rights and standards of living, now looking more like Mexico or Colombia.

CWA and UAW are In These Times sponsors.