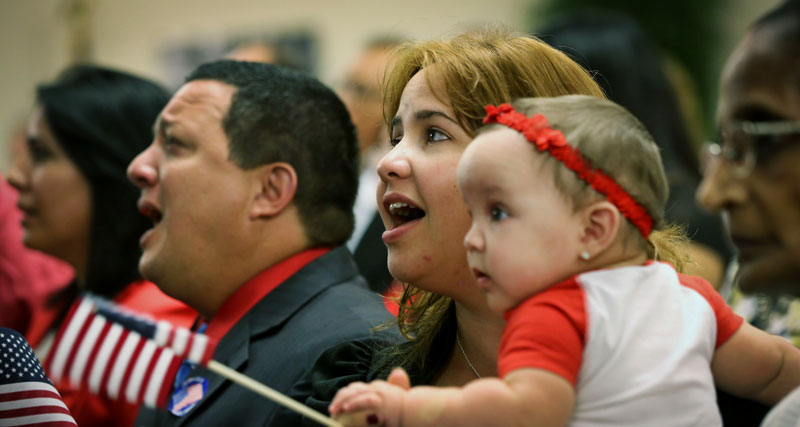 On February 14 in Tampa, Fla., Cuban immigrant Judy Lacosta participates in a U.S. naturalization ceremony, along with her husband, Ed, and baby, Melody Grace. (Photo by John Moore/Getty Images)

As they begin to lose their Cuban-American base, Republicans start seeing faults in a Cold War-era immigration policy.

The established Cuban-American community is growing resentful: The newcomers’ unfettered coming and going diminishes their exile.

The Cuban Refugee Adjustment Act—the U.S. law that favors Cubans over all other immigrants—might get an overhaul in the course of immigration reform, courtesy of the very politicians who’ve most benefitted from it: Republicans, and specifically, Cuban-American Republicans.

Sen. Marco Rubio, Rep. Ileana Ros-Lehtinen and Rep. Mario Diaz-Balart have all suggested that it might be time to “tweak” the law that helped build their South Florida power base of Cuban-American voters.

The law, enacted in 1966, was designed to legalize the status of Cubans who fled to the U.S. after the 1959 Communist revolution. It gives Cubans immediate parole, allows them to come into the country by any means (legal or not), makes it virtually impossible to deport them, and gives them legal residency in one year and one day, among other perks. In addition to the Adjustment Act, the United States also guarantees a minimum of 20,000 annual visas to Cubans under a 1994 treaty—a fixed quota not available to any other country.

From the U.S. point of view, those leaving Cuba are fleeing persecution by a Communist dictatorship. But from the Cuban government perspective, many are just fleeing economic conditions.

Here’s the weird part: Rubio, Ros-Lehtinen and Diaz-Balart, usually on their party’s right-wing, have started to see some merit in the Cuban government’s argument.

Of course, they’d never put it that way. What bugs them is that the fast-track allows many newer arrivals to return frequently to Cuba after the year-and-a-day required for legal U.S. residency—undermining the law’s premise that they’re being politically persecuted. The established Cuban-American community is growing resentful: The newcomers’ unfettered coming and going diminishes their exile.

“It’s becoming increasingly difficult to justify it for my colleagues when there are people who come to the United States … and within a year and a day are traveling to Cuba 25 and 30 times a year,” Rubio said at a recent press event. “That being said, it’s important for us to remind people that Cuba is a tyrannical regime.”

What the senator probably means is: Rather than recognize that, whatever problems there are in Cuba, widespread persecution of the kind the law was designed to address is no longer a factor, he prefers to perpetuate the myth of a tyranny so singular that absolutely no other compares—not in, say, Syria, or North Korea, or Turkmenistan.

Add to this absurdity two recent developments. The first is that reforms to Cuba’s migration system enacted in January eased restrictions so that now virtually any Cuban can get a passport if the host country offers a visa. Dissident blogger Yoani Sánchez, who’d been denied travel documents 20 times under the old system, got her new passport and is currently on a three-month world tour that includes the United States.

The second is the trajectory of Cuban-American political affiliation. Long taken for granted as the GOP’s Latinos, Cuban Americans came close to breaking for Barack Obama in 2012, continuing a trend, fueled by younger Cuban Americans, toward the Democrats that started with Obama’s 2008 campaign. Bizarrely, it’s the Democratic Party that is now defending the Adjustment Act, a move that seems designed to not rock the boat while Cuban Americans appear to be going their way.

In any case, Rubio, Ros-Lehtinen and Diaz-Balart aren’t trying to scrap the law. In fact, Rubio hasn’t made any specific proposals yet, while both Ros-Lehtinen and Diaz-Balart have hinted that they would support an amendment prohibiting Cuban immigrants from returning home for a period of time after gaining U.S. residence. How they might do that is somewhat of a mystery, given the inherent unconstitutionality of denying travel: Even the Trading with the Enemy Act—the so-called Cuban embargo law—limits spending, not travel.

But the Cuba Refugee Adjustment Act—a Cold War relic that hangs on simply because of Cuban-American electoral potential—should be scrapped. Never mind its wobbly ideological foundation: It is inherently unfair to privilege one immigrant group over all others. That alone makes it un-American, and wrong.