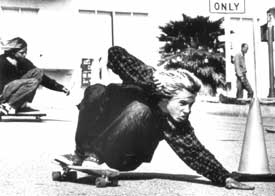 Dive in, the Pool’s Empty

BY Joshua Rothkopf
Share TweetReddit0 EmailPrint
Ah, to be young, wild and Californian: Dogtown and Z-Boys, an affectionate, free-spirited history of the reinvention of skateboarding in the mid-’70s, from faddish obscurity into a global code of bad-boy arms, has a lot on its agenda. There’s enough depth here, solidly anchored to the desperation so often bred in slums, to take its interviewee’s claims of urban revolution seriously. But it’s the priceless footage of daredevilry—grainy, streaked and all the more kinetic for it—that ultimately persuades: beautiful kids, beneficiaries of that unmistakable West Coast gene for cool, with the breeze in their hair and the need for speed. Never mind Spidey, these are the real wall-climbers.

Dogtown was the audience favorite at last year’s Sundance, but don’t let that prehipsterized cred turn you off. It’s made with great authority; director Stacy Peralta, in his younger years, rode ramps with the best of them and was the movement’s shrewdest self-promoter. (In one of his film’s funnier asides, Peralta cruises into an episode of Charlie’s Angels, unwittingly foiling a mustachioed sniper.) The intentionally laconic narration is by Sean Penn, these days a respected actor I hear, but to me forever Jeff Spicoli, in a cloud of pot smoke and surf fantasy, from Fast Times at Ridgemont High. All of it feels right, even the jittery edits and other roughed-up visual skidmarks. Peralta may have crafted a love letter to his own youth, but it’s still a love letter—a glorious, romantic one at that.

To understand what made these skaters special—and the documentary is ample with its brief histories, including a two-minute crash course on the rise and fall of Venice, an abandoned L.A. funland gone to seed—requires a little background. Apparently skateboarding was a relatively stiff-backed affair upon its debut, practiced by clean-cut youngsters and the occasional regional champion named Woody. It died the sudden death of the yo-yo in 1965, but that didn’t stop a scruffier breed from attacking old rollerskates with a saw and attaching the wheels to pieces of plank. These were the children of blue-collar south Santa Monica, many of them from broken homes, who in the morning surfed the treacherous coastal waves around rusting pylons, then settled into pleasant afternoons of skating shoeless down steep inclines.

Yes, it was a family. Maybe an Osbournes-like family (and Ozzy does wail on Dogtown’s primo soundtrack of stadium anthems) but a loyal pack nonetheless, bound by risk-taking. The gang gathered around the Zephyr Surf Shop, whose nonconformist owners encouraged their “Z-Boys” to go for even higher levels of daring and discipline. A final convergence of disasters both natural (a severe drought that emptied sloping backyard pools) and parental (the invention of the urethane wheel, improving traction on all surfaces) made Team Zephyr ready for the Del Mar Nationals in 1975, where only they knew what was about to be wreaked.

Perhaps it’s inevitable that Dogtown can’t top that exhilarating moment, rare to even the most privileged documentarians—the future captured dawning on confused faces. Traditionalists scowled and judges shook their heads as the Z-Boys (and one Z-Girl) rampaged down the course, crouching and swiveling, tearing up simple slaloms and their innocuous competition. The scene is a magnificent payoff to Peralta’s steady build, and you laugh not only at the terror they inspired but the familiarity of the elements they introduced—blue Vans sneakers, unkempt hair, etc.—that are now de rigeur. Woody sulked home; salvation had arrived.

The movie splinters apart in its last third, just as the team did, lured away by endorsements, fame and excess. These segments on a few individual showstoppers—including Peralta himself—are cheeky enough to engage but shy to comment on the whiff of money in the air. It’s a slight disappointment after so much fuck-you recklessness. (Jay Adams, the team’s youngest golden boy and most naturally gifted, is a particularly sad casualty; you wince at the scar on his grown-up forehead and the quiet disclosure of his incarceration for drug-related crimes.)

Peralta is content to close on the giddy verges of aerial escape, ever higher over the lip of the pool, before such exploits were safely branded X-Treme. Call him a timid social critic; he spent all his guts up there on the screen.