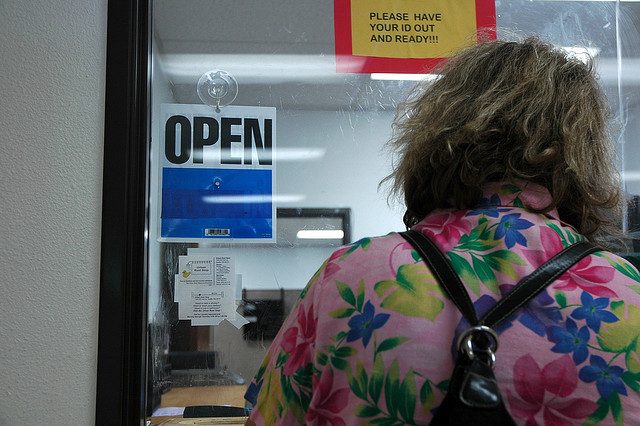 A woman lines up for food stamps in Seattle. CEOs incite the 99 percent to fight amongst themselves by attacking food stamp recipients. (Wonderlane/Flickr/CreativeCommons)

CEOs blame the poor for the nation’s financial woes, then laugh all the way to the Caymans.

The rich snicker as the vast majority of Americans are so distracted they don’t focus on record corporate profits, on record low corporate tax payments or on lobbyists buying tax breaks for corporations and loopholes for offshore accounts.

As the U.S. Commerce Department released a report late last month showing corporate profits at a 60-year high, suddenly the big news was about how cheating surely must be rampant in Social Security disability.

Also late last month, a Washington Post investigation showed that the 30 companies that make up the Dow Jones industrial average pay a dramatically smaller portion of their profits in taxes than they did a half century ago. Instead of discussing how that impacts government services, all of Washington is talking about slashing Social Security and Medicare.

CEOs and 1 percenters have elevated that old con to a whole new level. To them, bait is not a lure to a store but a taunt about the poor. “Look over there, a welfare queen!” they goad. “Look, someone not-quite-dirt-poor might get Medicaid,” they needle. Then they laugh all the way to their secret accounts in the Caymans as the 99 percent fight among themselves over how many pennies the government throws at the poor. The rich snicker as the vast majority of Americans are so distracted they don’t focus on record corporate profits, on record low corporate tax payments or on lobbyists buying tax breaks for corporations and loopholes for offshore accounts.

In defense of the 99 percent, it’s hard to concentrate on the big economic picture when household finances are so grim. The Commerce Department reported that in January personal income fell 3.6 percent. Overall, considering taxes and inflation, the decline was the largest in 57 years.

This bad news follows what the Economic Policy Institute (EPI) calls a lost decade for most American families. In its 12th edition of The State of Working America, EPI writes:

“A quarter century of wage stagnation and slow income growth preceded this lost decade, largely because rising wage, income and wealth inequality funneled the rewards of economic growth to the top.”

The top made out like, well, like bandits. Over the past 30 years, CEO compensation rose from 42 times the average blue collar worker’s pay to 380 times.

But CEOs say, “Look away, America. Look away!” Focus instead, CEOs say, on minimum wage! Why should some guy earning the minimum wage of $7.25 an hour, a whopping total of $15,080 a year, get a raise, as President Obama proposes, when the average worker has not? That needling comes from CEOs pulling down 380 times a blue-collar worker’s pay.

Never mind that both blue-collar and minimum wage workers should get raises. Especially since the Commerce Department says corporate profits increased to 25.6 percent in 2012, the highest in any year since 1950 and far higher than the 19.9 percent level common in the years just before the economic collapse.

Corporations have the money for raises. They’re just not giving it to the people whose labor produced the profits.

And they’re sure as hell not giving it to the government either. Citizens for Tax Justice and the Institute on Taxation and Economic Policy evaluated 280 of the Fortune 500 companies and found that 30 paid no federal income taxes at all from 2008 through 2010. The following year, 26 paid no income taxes. None. Zip. Zero.

Some corporations pay. But not much. A Washington Post analysis found that about 50 years ago, corporations included in the current Dow Jones industrial average routinely listed federal tax expenses as 25 to 50 percent of worldwide profits. Now, the Post found, they report less than half that.

These are companies whose lobbyists whine and cry to Congress that the nation’s 35 percent top corporate tax rate is just too terribly high. Among those singing that sad song is Procter & Gamble, which the Washington Post found pays 15 percent. P&G, the world’s largest manufacturer of consumer products, insisted in a statement last year that the United States must “reduce the corporate tax rate.”

Right, so then Procter & Gamble would pay a smaller percentage than a blue collar worker.

“Look away, workers, look away,” the CEOs say. “Look over there, where someone on food stamps is buying cigarettes! If they can buy a pack of cigarettes, then they don’t deserve food stamps, right? Attack food stamp recipients!” the CEOs urge, inciting the 99 percent to fight among themselves.

Last week, the International Consortium of Investigative Journalists began releasing information regarding offshore bank accounts and shell companies belonging to the world’s 1 percenters. The information came from a cache of 2.5 million files leaked to the Washington, D.C.-based group. The files include the names of 4,000 Americans who stashed money in tax havens like the Caymans, where secrecy aids and abets tax evasion and money laundering.

Don’t take the bait as these formerly-secret account holders try to distract you. Ignore them as they try to shift attention to some hapless pregnant teenager on welfare. Instead, focus the mind on this: The politicians who allow off-shore tax evasion, the politicians who establish loopholes so corporations pay no income taxes at all, the politicians who refuse to enforce the provision of the Dodd-Frank financial reform law requiring corporations to report the difference between CEO compensation and average workers’ pay. Time to vote and switch those politicians out of office.